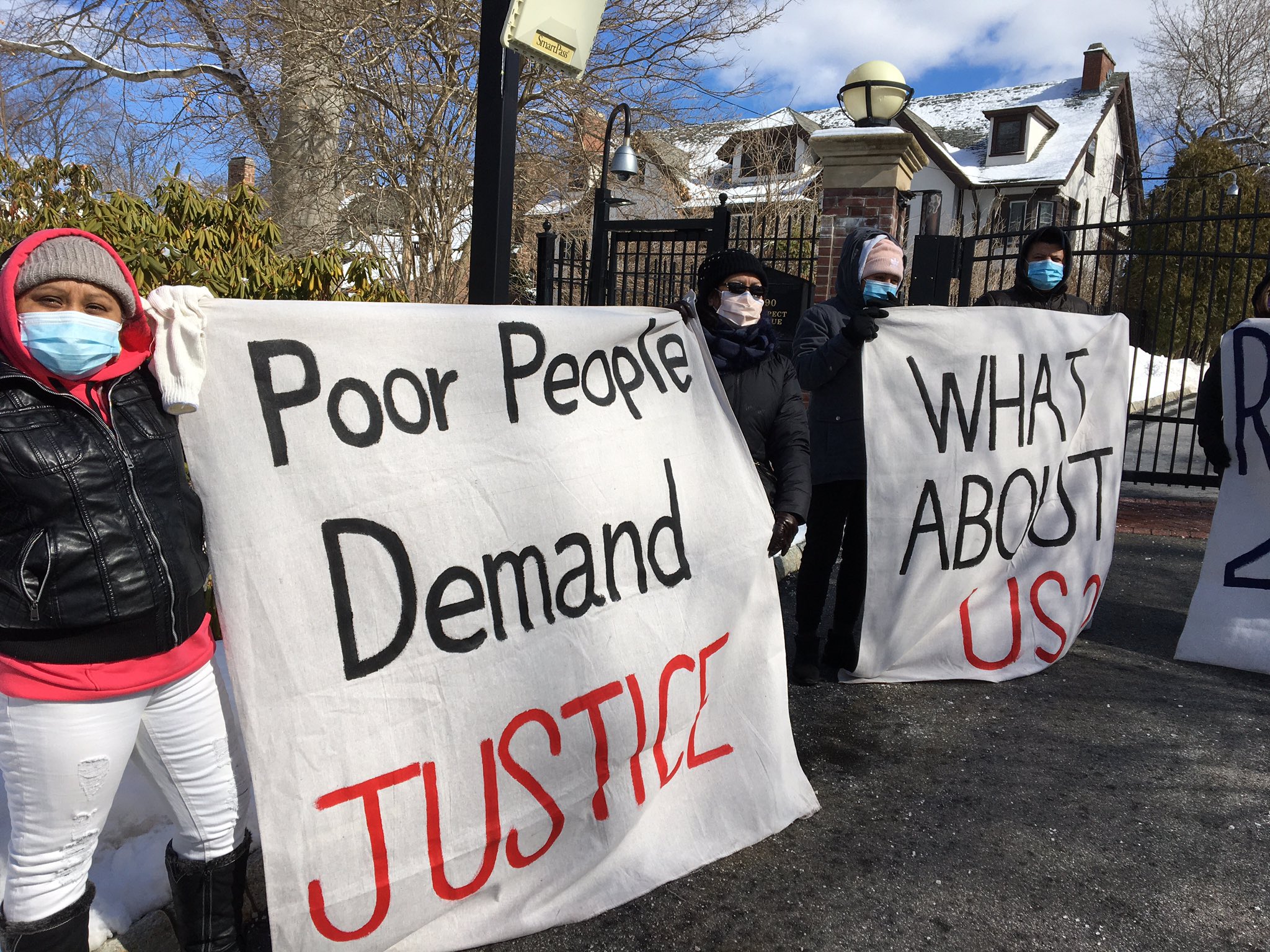 A rally titled “Recovery for All” is staged outside the Governor’s Residence in March 2021.

The COVID recession hit Connecticut’s economy harder than much of the rest of the United States, and it will take longer for the state to recover, according to a new report from policy think-tank Connecticut Voices for Children.

The group’s annual “State of Working Connecticut” report found that since the Great Recession, Connecticut’s economic output has lagged nearly every other state, and the COVID recession continued that trend. Economic output in Connecticut contracted 4.1% in 2020, compared with the nationwide pullback of 3.5%.

Connecticut never fully restored the jobs lost during the last three recessions, and in 2020, the state once again experienced deeper job loss relative to the United States as a whole, the report found. The number of non-farm jobs declined 14.7% nationally between February and April of 2020; in Connecticut, they fell 17.2%.

“Like the three prior recoveries, the recovery from the recent recession will likely significantly lag the pace of the U.S. as a whole,” the study’s author, Patrick O’Brien, said on a call with reporters Monday. “The U.S. is on track to close its current job shortfall in about nine months, whereas Connecticut is on track to close its current shortfall in about 23 months,” he said.

The impact of inequality

That’s in part due to the state’s wide economic inequities. For several decades, real wages have been rising faster for those already earning the most. And that’s truer for Connecticut than most other states.

Last year, the top 10% of earners in this state made five times more per hour than the bottom 10% — higher than the national figure of 4.8. Connecticut also exhibits wider wage gaps by race and ethnicity, and by gender, than the broader U.S., the report found.

That “highly inequitable distribution” harms families in low- and middle-income brackets, O’Brien said, and it can hamper economic growth.

“There’s a definite relationship between both of these components — this idea of the size of Connecticut’s economy and the distribution within it,” O’Brien added. “In the simplest sense, if you give money to a working class family, they’re going to spend a much greater percentage of that money to go directly into the economy.” Wealthy families, on the other hand, might be more likely to save money or spend it outside of the state, he said.

The report concludes with a handful of progressive policy recommendations, including tax reform that would shift the “tax burden on working- and middle-class families to the wealthy” and spending reform that would shift “spending to programs that more directly benefit working- and middle-class families.” An overall increase in both taxes and spending would go even further to fostering economic growth, the report argues.

“Many of the things that they’re talking about are incorporated into our current budget document,” said state Sen. Cathy Osten, D-Sprague. That includes the earned income tax credit, raising the minimum wage and additional support for things like group homes and food banks, she said.

“Can there be more done? Yes,” Osten said. “But are we addressing a lot of the issues that they call for? Absolutely.”

Chris DiPentima, president of the Connecticut Business & Industry Association, said he’s wary of tax reform after two major tax hikes in 2011 and 2015. “We kind of tried that experiment already,” he said. “It actually did the opposite, it just dragged on the economy.”

DiPentima said according to a recent survey of his organization’s members, “affordability” is a top concern for Connecticut businesses and residents alike. The idea of raising taxes or government spending is anathema to solving that affordability problem, he said. “To reprioritize what we spend money on, that obviously should be the focus,” he said.

DiPentima said he agreed with the report’s finding that inequality — particularly how it plays out in education and workforce development — is holding Connecticut back. “You can have businesses here, but if you don’t have the workers here, you’re not going to realize your true potential.”

For her part, Osten also highlighted recent efforts to build out adult education, certificate programs and other workforce development. “Those are the things that are going to move the needle on both jobs, revenue coming in, and on the ability for us to address the issues of those most in need,” she said.

Erica E. Phillips is CT Mirror's first-ever Economic Development Reporter. Before joining CT Mirror in August 2021 Erica was a writer / producer for public radio’s Marketplace, and was a reporter for the Wall Street Journal for seven years, first as a general assignment / regional economy reporter and then as a supply chain reporter covering freight, trade, and e-commerce. She grew up in Minneapolis, MN, graduated from Haverford College in Pennsylvania with a degree in economics and a concentration in Latin American studies, and received a master’s in specialized journalism from the University of Southern California.