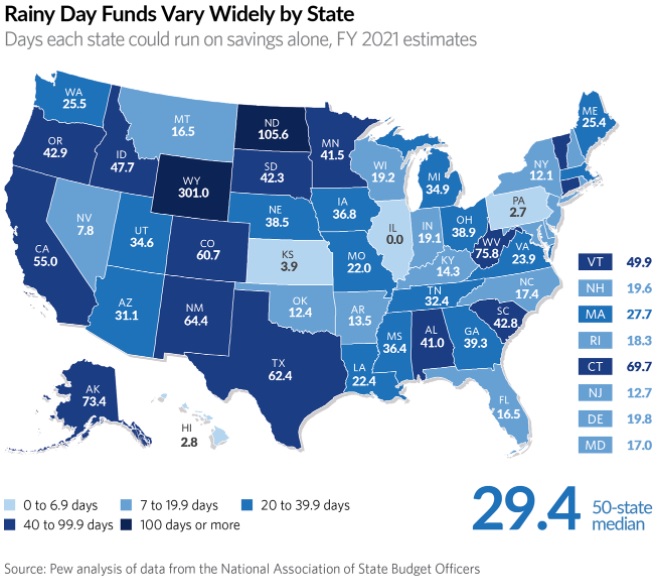 While massive federal aid has helped states elevate their budget reserves above pre-pandemic levels, Connecticut’s fiscal safety net has few rivals, according to a new report from The Pew Charitable Trusts.

Connecticut’s $3.1 billion rainy day fund — which would allow the state government to operate for nearly 70 days — has been amassed almost entirely over the past four years, due to an aggressive savings program and a surging stock market, as well as federal coronavirus relief.

And had Connecticut recently deposited its latest $1.6 billion surplus in its reserves — the money instead is earmarked for the state’s cash-starved pension system — the state would be tied for second nationally with a reserve three-and-a-half times the national average of 29.4 days.

While budget reserves traditionally aren’t viewed as politically exciting, “a lot of legislators have written to their constituents on that” and begun to campaign for re-election on this achievement, added Fonfara, who co-chairs the Finance, Revenue and Bonding Committee.

“I think that [reserve level] is something that we can’t talk about enough,” added Sen. Cathy Osten, D-Sprague, co-chairwoman of the Appropriations Committee. “It is leading us to a point where we can count on an ability to fund the needed safety net programs in our budget” even in an economic crisis.

States rely heavily on reserves during a fiscal downturn to minimize cuts to core programs such as education, health care and municipal aid, and also to mitigate the need for tax increases.

Connecticut’s economy was hit hard by the Great Recession, which ran from late 2007 through mid to late 2009, and employment and wage levels never fully rebounded.

By 2011, the state had drained its $1.4 billion budget reserve — which was equal to 8% of annual operating costs at that time — and had run up about $1 billion in operating debt. And its budgetary reserve never topped 3% until the late 2010s.

In October 2017, when lawmakers debated and ultimately adopted savings reforms, they seemed more hypothetical than realistic. Connecticut had a meager $182 million in the bank at that time, worth less than 1% of the General Fund.

The 2017 legislature nonetheless raised the maximum reserve allowed from 10% to 15% of the General Fund and created a savings mechanism that became known as the “volatility adjustment.” It made it very difficult for state officials to spend state income tax receipts tied to investment earnings — traditionally one of the most volatile revenue streams in Connecticut — once annual revenues topped $3.1 billion.

Connecticut also benefited from a stock market that has risen sharply since 2018 and has maintained and built upon that growth — even after an initial drop shortly after the coronavirus outbreak began in the United States in March 2020.

But Connecticut also amassed billions of dollars in surpluses in the 1990s and early 2000s, and most of those were spent. The difference this time, Fonfara said, was a culture change within the Capitol.

Though Democrats have controlled both chambers of the legislature since 1997, they couldn’t solve a tough 2017 budget debate on their own and brought in the GOP to craft a bipartisan package. Fonfara praised minority Republicans for staunchly supporting the volatility adjustment and other fiscal reforms.

The savings program can be suspended, but only with a 60% vote in both the House and Senate.

But Fonfara noted that Gov. Ned Lamont, a fiscally moderate Democrat, has constantly challenged legislators since he took office in January 2019 to adhere to the volatility adjustment and to avoid tapping the rainy day fund.

Lamont’s budget director, Office of Policy and Management Secretary Melissa McCaw, said without steadfast adherence to the savings program, Connecticut never would have filled its rainy day fund to the legal limit last year, nor made history this fall by depositing an extra $1.6 billion into its pension system.

With about $40 billion in unfunded obligations amassed over more than 70 years, Connecticut has some of the largest pension debt, per capita, of any state.

Those liabilities “have choked our budgets and hindered our economic growth,” McCaw said. “We still have a long way to go to meet the challenges ahead, but Connecticut is on the right track, and we are well-positioned to continue this positive progress.”

But some have criticized Connecticut’s handling of its reserves.

State government alone received roughly $3 billion in federal aid through the American Rescue Plan Act, and Lamont and lawmakers used $1.8 billion of it to balance the new budget covering this fiscal year and next. Nonpartisan analysts estimate state finances, over those 24 months, will finish an unprecedented $2.3 billion in the black. That means this potential surplus, if projections hold, also would go into the pension system — since the rainy day fund is at its legal maximum.

The Recovery For All coalition, a grassroots team of labor- and faith-based organizations, has pressed Lamont and lawmakers to invest more in social services, health care, job training and tax relief for low- and moderate-income households harmed most during the pandemic.

“At the same time our budget reserves are full — at the same time our billionaires and big corporations are profiting hand over fist — the vast majority of our residents are struggling more than ever,” said Puya Gerami, director of the coalition. “And the state continues to maintain an upside-down tax structure while chronically underfunding our systems of education, health care, housing and social services. The status quo approach to the state budget has failed millions of residents for decades.”