Malloy plan pumps up tax receipts by more than $800 million 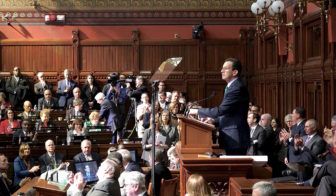 Gov. Dannel P. Malloy presents his budget proposal to the General Assembly in a joint session on Wednesday.

Gov. Dannel P. Malloy’s two-year budget plan raises more than $360 million in net new tax receipts over the biennium, while canceling or delaying more than $480 million in net tax cuts that he signed last term and promised to start after the election.

And while the administration argued $330 million of those new receipts would effectively be returned to the hospital industry that paid them, Connecticut has violated a similar pledge in the past.

The governor pitched his plan Wednesday as free of tax hikes, but he faced critics who rejected that argument.

Despite warnings from nonpartisan analysts that state finances faced large shortfalls in the 2016 and 2017 fiscal years, Malloy signed big tax cuts into law in the second-half of his first term – and scheduled them all to begin after the 2014 election.

But while the governor committed the state to dish out almost $550 million in tax relief over the coming biennium, his new plan recommends postponing or canceling all but $62 million of that relief.

Retired teachers will receive an income tax break on a portion of their pensions, and consumers benefit from a sales tax exemption on non-prescription medications.

Malloy insisted in his annual budget address that the relief he does provide as he grapples with big deficits is focused in the right areas.

“Even in this time of difficult choices, we must not ask any more of our middle class,” the governor said. “…The hard-working members of our middle class have helped turn our economy around. They’ve pitched in and shared in the sacrifice. Let’s give them something back.”

But a host of other tax breaks were put on hold, including: an expanded income tax credit for the working poor; another income tax exemption for single individuals; surcharges on the corporations and insurance premiums taxes; and a sales tax exemption on clothing costing less than $50.

But the Malloy administration engaged in budget semantics as it tried to argue that a roughly $360 million net increase in tax receipts over the next two years did not represent a “tax increase,” since it didn’t involve changing any tax rates.

The governor recommended new restrictions on credits that corporations can claim to raise almost $350 million.

The administration’s budget presentation referred to these changes as “closing loopholes” rather than as tax increases.

Many tax cuts promised, few delivered in new budget
A total of $549.7 million in tax cuts were signed into law for fiscal years 2016 and 2017, but just $61.6 million were delivered in Gov. Malloy’s budget proposal.
Source: Office of Policy and Management

But Joseph F. Brennan, president of the Connecticut Business and Industry Association, said these changes clearly are tax hikes that will cost businesses deeply.

“If (the governor’s proposals) are bringing in more revenue through any type of change, then that is a tax increase,” he added.

Even some of Malloy’s fellow Democrats conceded the no-tax-increase argument was a tough one. “Obviously anyone that is asked to pay more is going to see that as a tax increase,” said Sen. John Fonfara, D-Hartford, co-chairman of the Finance, Revenue and Bonding Committee. “Our job is now to begin evaluating them and we will do that with the goal of continuing to grow our economy.”

House Speaker J. Brendan Sharkey, D-Hamden, said he is concerned about lowering the sales tax rate if only one sales tax exemption is to be eliminated. “It should only be done if there is a large goal of reform in mind,” he said.

Another $340 million would come in over the next two years combined by changing the formula for calculating a tax on hospitals.

New tax revenues in FY 16 and 17
More than $670 million in new tax revnues were proposed in Malloy’s new budget… (*Most of these new receipts would effectively be returned to the hospital industry that paid them, but Connecticut has violated a similar pledge in the past.)
New tax reductions in FY 16 and 17
… and $265 million in new tax cuts were proposed, meaning a net of $407.7 million in additional taxes were in Malloy’s budget proposal.
Office of Policy Management

The administration also argues this isn’t a tax hike since it plans to return all of those funds to the industry – a move to leverage about $200 million in additional federal aid.

But when Malloy and lawmakers imposed the original $350 million-per-year hospital tax in 2011, the governor made the same argument. But hospitals only got the full tax payment back for one year. The governor and legislature have steadily reduced it since then. This year, for example, hospitals pay in $350 million but get $96 million back.

The governor’s plan does offset some of these tax revenue increases with proposals that would cost the state funds, chiefly a two-stage reduction in the sales tax that would save consumers $225 million over the biennium.

And by eliminating the business entity tax, a small fee levied every two years, small companies would get about $40 million in relief.

Subtracting the almost $62 million in promised tax cuts that the Malloy budget did deliver still leaves a net increase in tax receipts for the upcoming biennium in excess of $360 million.