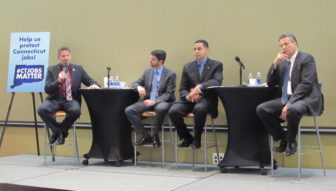 Mashantucket Pequot and Mohegan tribal leaders say the new interest by greater Hartford municipalities in hosting a casino should translate into momentum for their joint proposal at the General Assembly.

“This ought to be a good signal to legislators that perhaps this is a good idea,” said Kevin P. Brown, chairman of the Mohegan Tribal Council.

Brown and Rodney A. Butler, his Pequot counterpart, pitched the Hartford business community Monday on their proposal for a regional casino to preserve gambling jobs and market share as MGM prepares to open a casino resort in Springfield.

Time is becoming a factor for the tribes as the legislature Monday began its four-week scramble to its constitutional adjournment deadline of midnight June 3. It remains unclear if Senate leaders, who favor the plan, can find the votes for passage.

The only solid signs of progress have come outside the State Capitol. Anthony W. Ravosa Jr., a developer, says he sees local support for locating a casino in the vacant movie multiplex he owns in East Hartford, off I-84.

In the I-91 corridor, officials in East Windsor and Windsor Locks have expressed interest, and officials in Enfield have reversed their previous statement of opposition and now are open to exploring a casino proposal.

“It balances the conversations,” Brown said of the local interest. “It’s not just Rodney and I talking about the impacts. There is a recognition of the impacts and the possibilities.”

“It starts to make it real,” Butler said.

The tribal leaders and the chief executive officers of their casinos, Foxwoods Resorts Casino and Mohegan Sun, staged a public policy breakfast arranged by the region’s major business association, the Metro Hartford Alliance.

They told their audience that they are not trying to sell Connecticut on the expansion of casino gambling as the foundation of a new economy. Their plan is about preserving market share against a wave of new casinos coming in Massachusetts, New York and Rhode Island.

“The reality is less than 20 minutes from here, shovels are in the ground today,” Butler said, referring to MGM Springfield. “They intend to take $300 million out of the state of Connecticut into Massachusetts.”

The tribes project a $702.8 million shift of casino-related revenue from Connecticut to Massachusetts and New York by 2019, with a potential annual loss of $100 million in slots revenue to the state.

The tribes now pay the state 25 percent of their gross slots revenue, which has dropped below $300 million from a high of more than $400 million in 2007.

At the breakfast, the tribal representatives were asked the same questions that are posed at the Capitol, including a query about a warning letter last month from Attorney General George Jepsen.

Jepsen warned that legislation giving the tribes exclusive rights to a new casino was itself a gamble, potentially endangering the current profit-sharing deal with the tribes and exposing the state to claims of illegal favoritism.

“We feel very confident we can address all those,” Butler said.

Connecticut will make more than $1.6 billion in supplemental payments into its cash-starved pension systems this fall.