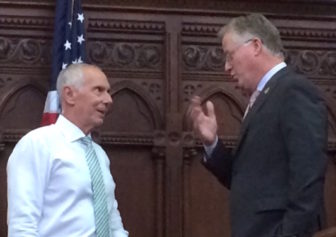 The governor’s warning is both a potential complication to budget negotiations and evidence he already has identified potential funding for a 30-year infrastructure overhaul, a task he gave to a special study group with an end-of-summer deadline.

Sources familiar with the talks said that Malloy, who met twice with Democratic legislative leaders in his office Wednesday night and again early Thursday in a meeting that ran past 3 a.m., raised cautions about Senate Bill 1, the Senate leadership’s municipal aid measure.

Mark Ojakian, the governor’s chief of staff, acknowledged Thursday afternoon that using the sales tax to support the governor’s transportation infrastructure program is an element of the budget talks.

The push to approve, or at the very least reserve a portion of a sales tax increase for transportation, could run contrary to two points Malloy laid out in February when he proposed the first biennial budget of his second term:

Malloy touted that last point considerably in the days leading up to and immediately after his budget presentation on Feb. 18, using it as a political shield against critics who charged he had violated his campaign pledge not to raise taxes.

The governor’s budget would raise $360 million over the next two fiscal years combined by restricting credits and making other rule changes to taxes on corporations and hospitals. It also would cancel or postpone more than $400 million in tax cuts approved last year but scheduled to start this year. The biggest deferral involved restoring the sales tax exemption on clothing costing less than $50.

The governor partially offset this recommendation in his budget by calling for the 6.35 percent sales tax rate to drop to 6.2 percent on Nov. 1, and then to 5.95 percent on April 1, 2017.

And while consumers would have gotten more relief – according to estimates from nonpartisan analysts – with two years of clothing exemptions than through the tax rate changes, Malloy argued his plan would save consumers more three years from now.

“We really are cutting taxes,” he told reporters during a walking tour of Middletown businesses to promote his sales tax plan on Feb. 16.

At the same time, the governor proposed a 30-year, $100 billion investment in transportation, but didn’t offer a corresponding plan to pay for it. Republican legislators called it a dodge to avoid proposing the tax hikes or tolling likely needed to pay for such a plan.

Malloy’s $100 billion investment figure refers largely to funds the state would borrow to finance capital projects, and to the corresponding federal grants these state commitments would leverage.

If launched with a funding source, the transportation plan is shaping up as a major legacy of the two-term Democratic governor, who already has received favorable national press attention for tackling a subject ignored by Congress and many governors.

Malloy’s initiative affects the state budget’s Special Transportation Fund in two ways. It necessitates additional spending to cover debt payments on the borrowing, and also on engineering, inspection and other project support services.

And according to the administration, existing revenues are enough to cover those transportation costs in the budget for the next two fiscal years. The panel of experts would be tasked with studying how to foot the bill over the long haul.

But since February, Malloy has run into a problem.

If he were eyeing the sales tax all along as a means to pay for transportation, someone else found a use for it first.

Senate Democrats crafted a plan to broaden the sales tax base and raise more than $1 billion in new revenues over the coming biennium. About 70 percent of those funds would go to communities to ease property tax burdens, particularly in the cities.

Shortly after the finance committee endorsed this plan in late April, Malloy complained it could harm both middle-income households and small businesses.

But sources said the governor told lawmakers during the meetings late Wednesday and early Thursday that the governor had his own plans for the sales tax, and it involved sending hundreds of millions of dollars in receipts into transportation. This also would mean scaling back the Senate Democrats’ plans to use sales taxes for property tax reform.