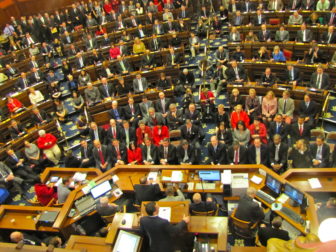 Gov. Dannel Malloy introduces his budget that increases funding for charter schools to the General Assembly in February.

Gov. Dannel P. Malloy’s insistence on increasing funding for charter schools has more than a dozen Democratic legislators questioning whether they can support the next state budget if it means their neighborhood public schools are flat-funded or cut.

“If you are going to fund charters, you need to increase funding for our schools. That’s the message,” said Rep. Hilda Santiago, D-Meriden.

On Wednesday, a dozen House Democrats met with Speaker J. Brendan Sharkey, D-Hamden, to share their concerns with the Democratic governor’s determination to spend $4.6 million in the upcoming fiscal year to open a new charter school in Bridgeport and another in Stamford.

“I am part of a group that understands, and we are saying no to this,” said Rep. Peter Tercyak, D-New Britain.

A group of Democratic senators also met with their leadership this week to share similar concerns.

“I understand that the governor wants charters. I want what my constituents want. We are being disrespected by the state Board of Education,” Sen. Edwin Gomes, D-Bridgeport, said of the panel appointed by the governor that approved a new charter school for Gomes’s district before the legislature agreed to provide the funding. “I got elected by people, and they are not supportive. I have been hearing people have threatened to vote against the budget. I don’t know what I am going to do yet.”

Malloy met twice with Democratic legislative leaders overnight Tuesday into Wednesday, and sources said the governor indicated he would not accept anything less than the funding level he proposed for charter schools.

The governor has been a major proponent of expanding charter school enrollment. His budget proposes expanding enrollment in existing and new charter schools by 1,446 students next school year, a move that would cost the state $15.9 million. His budget cuts millions in funding the state currently provides the state’s lowest-performing neighborhood schools.

Earlier this month, he rallied with charter school advocates at the Capitol. 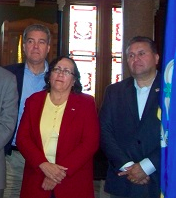 Reps. Edwin Vargas, Hilda Santiago and Bobby Sanchez say they are unsure they can support a state budget that increases funding for charter schools.

“Let me be very clear, we also have to understand that we are going to have charter schools in Connecticut,” Malloy said during the rally.

Office of Policy and Management Secretary Benjamin Barnes, the governor’s budget director, declined to answer questions Thursday about the funding charter schools might receive in the final budget being negotiated.

Even without the school funding controversy, it will be difficult for Malloy and his fellow Democrats in the House and Senate majorities to adopt a new two-year state budget before the legislative session ends Wednesday.

With a huge deficit topping $1.4 billion next fiscal year, officials are considering big tax hikes and major cuts to social services to wipe out the red ink. Moderate Democrats wary of the tax increases and others backing social services also may find it hard to support the package.

And with all Republican legislators expected to vote against the budget Malloy and Democratic leaders recommend, the coalition objecting to expanding charter schools could hold considerable weight.

“The way things stand now, I would vote against a budget with those two charter schools if funding for public schools stays flat,” said Rep. Edwin Vargas, D-Hartford, a former teacher and union leader.

Other members of the coalition said they are not yet promising to vote against the budget, but said it will make them second-guess whether they could support such a budget. 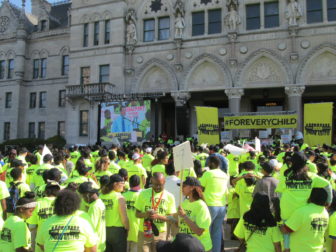 Gov. Malloy on the big screen at the charter school rally earlier this month at the state Capitol.

“If there is a budget that just has charter school funding increasing and flat-funds my district, it is going to be difficult for me to support that budget,” said Rep. Bobby Sanchez, D-New Britain. “Right now, I am questionable. I have a lot of social programs being cut in my district.”

“Voting ‘no’ would be something I would contemplate,” said Santiago.

“The governor has made no bones about his support for them. The governor may have made commitments to them, but he shouldn’t commit the legislature. We have to support our constituencies,” said Vargas. “This is an issue he is not listening on. He’s dug in his heels.”

Charter advocates are glad the governor is being so persistent.

“We’re grateful that the majority of legislators are bucking the special interests and listening to the pleas of parents who want a great school for their children,” said Kara Neidhardt, a spokesperson for Families for Excellent Schools, a charter advocacy group.

“More than 30,000 phone calls and emails to legislators have been made by everyday Connecticut residents,” Neidhardt said. “Gov. Malloy has been a champion on this issue, and he included this funding in the budget he proposed in February.  Why would a handful of legislators stand against the thousands of parents making their case for a great school for every child?”