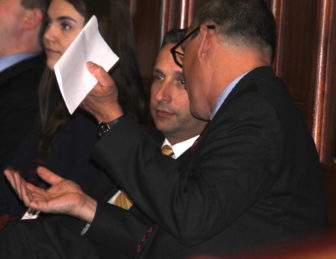 Senate Democrats took the extraordinary step in the final hour of the 2015 session Wednesday of threatening to cut off debate to ensure passage of a new state budget that raises tax revenues by $2 billion.

With less than an hour until the midnight adjournment deadline, Senate President Pro Tem Martin M. Looney stood to call the question, a move to end debate that is considered the nuclear option in legislative process, to stop a five-hour debate that had morphed into a Republican filibuster to kill the proposed two-year budget.

The process was last used at the State Capitol in 1978, also to end a budget debate, according to one senior legislative staff member.

After a brief discussion, Looney yielded to Senate Minority Leader Len Fasano, R-North Haven, who rose and announced he would conclude debate, but not before criticizing the Democratic leadership for muscling passage of a much-maligned budget through both chambers in little more than 12 hours on the last day.

The Senate passed the budget shortly after Fasano’s remarks, 19 to 17. Democrats Paul Doyle of Wethersfield and Joan Hartley of Waterbury joined all 15 Republicans in voting against the budget.

The plan has sparked heavy criticism and threats to leave the state from some of Connecticut’s largest corporations.

The budget, which soon will head to Gov. Dannel P. Malloy for his signature, barely survived in the House of Representatives. That chamber adopted the plan by a 73-70 margin following a five-hour debate Wednesday morning. But that came only after Speaker J. Brendan Sharkey, D-Hamden, who struggled to build enough support to pass the plan, kept the House in session through the night Tuesday into Wednesday morning.

Sources said Senate Republicans were frustrated when majority Democrats notified them late Wednesday that two omnibus bill to implement policies tied to the new budget – involving hundreds of pages – and a major two-year bonding package would be dealt with in a special session rather than before the midnight deadline. In addition, the largest of the bills – which has dozens of components – would not be available for review Wednesday.

In his remarks before the vote, Fasano took issue with the process behind the budget, noting that Republicans had not been part of any talks that led to the deal. And, citing projections that the state will face a massive budget deficit at the end of the two-year budget, Fasano said lawmakers failed to make needed structural change. 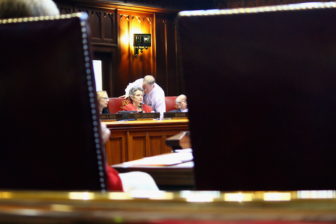 Sen. Beth Bye talks with an aide during the budget debate

“If you’re not going to talk about the structure that gets us to our problem and all you’re going to do is raise taxes and not look inward, you can never solve the problem,” he said, calling the budget a failure.

Looney, speaking after Fasano, offered a different take, calling the budget one of the best in his 35 years in the general assembly. He cited new investments in municipal aid and transportation infrastructure.

“It is a responsible budget that made difficult choices,” Looney said. “This is really a budget to celebrate. This is not a budget to be defensive about.”

Failing to pass the budget before the end of the session would have given the business community days – or possibly weeks – to intensify pressure against the plan before legislative leaders and Malloy could schedule a special session and hold another vote.

The $40.3 billion budget hikes income taxes on the wealthy and middle-income households while imposing major increases on corporations and hospitals.

Over the past week, major corporations including Aetna, GE and pharmaceutical giant Boehringer Ingelheim Corporation issued statements warning that the taxes would cost the state jobs and overall economic prosperity.

“Connecticut is in danger of damaging its economic future by failing to address its budget obligation in a responsible way,” Aetna wrote in its statement. “Such an action will result in Aetna looking to reconsider the viability of continuing major operations in the state.” 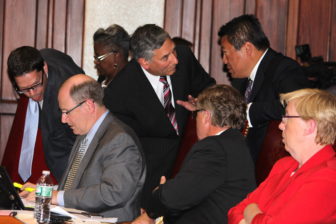 Nearly a quarter of the $2 billion in new tax revenue, $475 million, involves previously approved tax cuts for shoppers, businesses, insurance companies and the working poor that were canceled before they could be implemented.

Democrats who supported the plan noted that it also included a dramatic infusion of new aid, $436 million, to cities and towns. 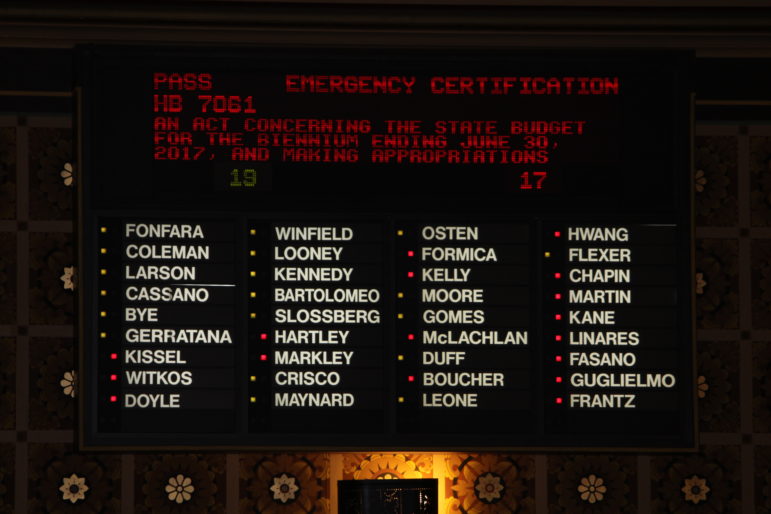 How each senator voted.