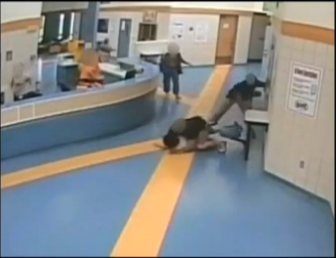 Jennie being restrained last year at the locked jail for girls

Fourteen months have passed since Jennie was violently taken down from behind as she walked from one end of the state-run jail for girls to the other.

That incident was recorded by surveillance cameras, and public release of that video this week has spurred debate about whether children are being abused by staff at two jails run by the Department of Children and Families.

Eight videos were released Tuesday by the state’s Office of the Child Advocate, which gathered them as part of an investigation that concluded that conditions in the juvenile jails were dangerous and that restraint and seclusion were being unlawfully overused.

On Thursday, concerned lawmakers on the panel that oversees juvenile justice wanted to know: Where is Jennie now, and how is she doing? And do the jails, which house juveniles convicted of a crime, improve their behavior after they leave?

DCF officials told the panel that Jennie is still locked up at the Pueblo Unit for girls in Middletown. Four attempts to place her in less-restrictive settings have been unsuccessful.

“One of the underlying struggles is that she wants to go home,” said Debra Bond, the clinical director of the facility. Jennie wants to live with her mother, who has serious mental health needs.

The news that Jennie is still at Pueblo — where she is seen on the videos begging not to be left in solitary confinement and then ripping out hair after staff run from the room and lock her in — was troubling to Rep. Toni Walker, D-New Haven, co-chair of the Juvenile Justice Policy and Oversight Committee.

“It sounds to me that we are just in a holding pattern with this young lady until she ages out of DCF and into the Department of Corrections [for adults],” Walker said.  “This child has come back four times. It’s not working.” 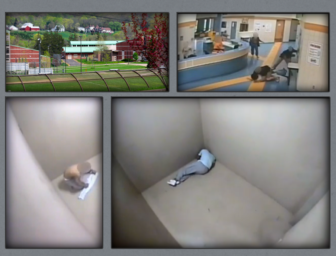 Several human rights groups and national mental health experts released statements after the the videos became public, agreeing that the state-run jails were using approaches that do not improve behavior and often escalate confrontations. Several groups have called for closure of the facilities.

Researchers at Georgetown University’s Center for Juvenile Justice Reform reported in June 2013 that DCF does not track what happens to youths after they leave the Connecticut Juvenile Training School, the jail for boys, also in Middletown.

“How do you evaluate what you are doing to know that it’s effective? Do you have statistics?” Walker asked DCF officials during Thursday’s meeting. She has been asking for data on recidivism for years, and is still waiting for it.

“Given the fact that I’ve asked the same question at the last three meetings, and I’m going to ask again, I still have not received a satisfactory answer,” he told DCF officials. “I am stunned that I am sitting here trying to figure out how you know that you’re being effective in your treatment that individuals get.”

DCF has put forward an action plan to address problems at the facilities. It includes eliminating the use of face-down, prone restraints. Mechanical restraints are being phased out except when youths are being transported. Additionally, DCF said it will ensure that a clinical staff member is present every time a youth is restrained and will require counseling sessions during periods of seclusion. The role of clinical staff has been expanded so they work more closely with other employees.

The agency said it is making changes to reduce “the use of interventions that we all want to avoid.”

They also have promised to create a so-called data dashboard to track outcomes. It’s unclear when that will be available to the public.

But some advocates aren’t buying that things will improve under that action plan.

“You know that saying, ‘fool me once’?…” Lara Herscovitch, the leader of the Connecticut Juvenile Justice Alliance, a coalition of advocacy groups, said during a forum earlier in the day at the state Capitol complex. “We are asking for independent monitoring. No, I am not going to take your word for it.”