It’s Foster, Finch and a fusion campaign in Bridgeport 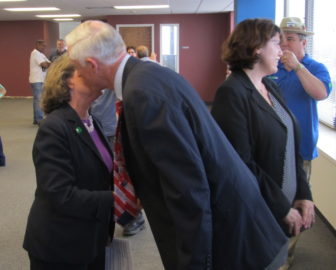 Bridgeport – This city’s mayoral election sharply veered into unchartered waters Tuesday with the birth of a fusion campaign to elect Mary-Jane Foster as a petitioning candidate and stop the return to City Hall of the fallen former mayor, Joseph P. Ganim.

Mayor Bill Finch, who finished second to Ganim in a three-way Democratic primary and then fumbled an attempt to stay on the ballot as a minor-party candidate, endorsed Foster before an unlikely collection of reformers, insiders and outsiders from the fractious world of Bridgeport politics.

Foster’s challenge is to immediately coalesce disparate campaigns into an effective organization while articulating a vision for Connecticut’s largest city that is broader than a plea to stop Ganim, who resigned after a corruption conviction in 2003 to serve seven years of a nine-year prison sentence. 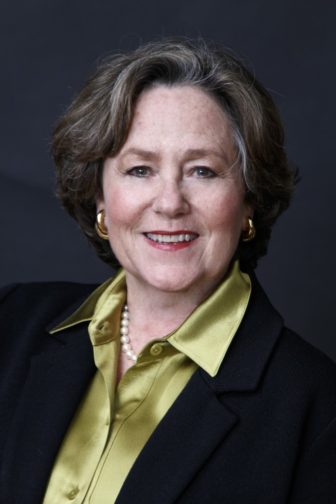 “We will find a way to unite for a better Bridgeport,” said Foster, a businesswoman and University of Bridgeport vice president who supported Finch eight years ago, unsuccessfully challenged him in a Democratic primary four years ago and then lost again two weeks ago.

Her unlikely new status as the last best hope to defeat Ganim – she had secured a place on the November ballot as a petitioning candidate before the primary, but recently suspended her campaign — comes exactly five weeks before voters go to the polls.

“Five weeks is not a lot of time. However, with enough motivation it can get done,” said Max Medina, a former school board member. “And based on my discussion with a broad cross section of folks, this is going to work,” he added. “Mayor Finch is to be commended. This is a very statesman-like move for him to do this.”

Across town, Ganim mocked the mayor and the woman who would succeed him. He noted that Foster had announced an end to her campaign, a decision quickly reconsidered when it became clear Finch might not have a place on the November ballot.

“She is nobody in nowhere land, really,” Ganim said. “She drops out. Finch is rejected by the voters. I don’t know necessarily that two losers necessarily make a winner under any formula.”

Foster and Ganim each had hedged their bets before the primary by gathering petitions to qualify for the November ballot, an easy task in municipal general elections. Finch chose an indirect route for a backup, relying on a new minor party that missed a key deadline, leaving him with the only a long-shot option of suing for ballot access.

Instead, he opened a conversation with Foster that led to Tuesday’s endorsement in a vacant 16th-floor downtown office overlooking the Steelpointe Harbor development, a mixed-use project conceived during the Ganim administration and delivered by Finch.

Ganim said Foster’s alliance with Finch is double-edged: It brings his support, but it undercuts her ability to sell herself as an agent of change in a city where the incumbent just made history by losing a Democratic primary.

“She can’t say she is for change, for reform,” Ganim said. “She just adopted the status quo.”

She thanked Finch for his service and promised to continue pursuing his policies of environmental sustainability, but she pointedly reserved the right to take issue with the incumbent. Tom Swan, an adviser to Foster, said Finch set no conditions on his endorsement, other than asking her backing for his environmental initiatives.

“He was amazingly gracious,” Swan said.

Standing next to Finch, who was accused at times of being less than transparent in his budgeting, Foster immediately promised to bring a fresh eye to city hall, especially to its budgeting and tax policies. Finch said nothing.

Foster ran as an outsider in the primary, and she said that status has not changed, even if she is backed by the mayor.

“I’m still the candidate that’s not part of the machine,” Foster said, a line met with applause.

It helps that Mario Testa, the city’s long-time Democratic chairman, broke with Finch and is backing Ganim, a former protégé whom he helped place on the Democratic ticket in 1994 as the nominee for lieutenant governor.

The question for Ganim is whether he can he expand his base beyond the voters who backed him in the primary. Two weeks ago, Ganim stunned Finch by turning out voters with no history of participating in primaries, as well as hundreds of the newly registered.

John Stafstrom, a former city council leader who also served as Democratic town chairman, conceded the primary vote for Ganim was impressive, but it most likely was the ceiling of his support.

Finch lost in part because of complacency, a sense that Ganim could not win the primary after his conviction of charges stemming from what federal authorities described as a massive scheme to extract bribes and kickbacks, he said. Ganim’s victory was a wakeup call.

“I’ve talked with many people who said, ‘I didn’t vote. I didn’t think it would turn out that way,’ ” Stafstrom said. “Foster can get the support of the Democrats who didn’t vote in the primary and the Republicans and unaffiliated who couldn’t vote.”

A Republican and independent are on the November ballot, but Stafstrom said voters will understand that Foster, a Democrat running in an overwhelmingly Democratic city, has the only chance of beating Ganim.

“They know the choice is between these two candidates,” Stafstrom said.