Joe Ganim gets his second chance in Bridgeport 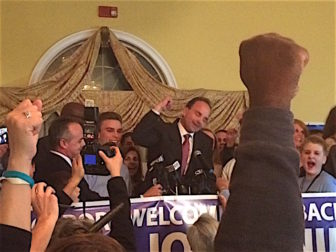 Bridgeport – A dozen years after he left office for federal prison, convicted as the leader of a racketeering conspiracy that netted $500,000 in kickbacks and bribes, the voters of Connecticut’s largest city voted nearly 2-1 Tuesday to return Joseph P. Ganim as mayor.

His mentor, the city’s long-time Democratic boss, Mario Testa, defiantly claimed victory for Ganim shortly before 9 p.m., swiping at the doubters. Testa yelled, “He’s going to bring the city out of its misery.”

The crowd at Testa’s banquet hall, long the unofficial headquarters for Democratic politics in Bridgeport, cheered for Testa, cheers that doubled in volume when Ganim emerged minutes later to climb a low stage, crowded with friends and family, including his three children and a brother, Probate Judge Paul Ganim.

“Tonight, we not only made history, but we defined a new course for this great city,” Ganim said, standing behind a banner, “Bridgeport welcomes you back Joe Ganim.”

Ganim, 56, divorced and disbarred, completed his unlikely comeback 24 years after winning his first term in city hall in 1991 and five years after ending a seven-year stay in federal prison in 2010. He begins his new term on Dec. 1.

He defeated Mayor Bill Finch in a three-way Democratic primary in September, a win typically tantamount to election in this Democratic stronghold. The anti-Ganim forces quickly coalesced around Mary-Jane Foster, the third-place primary finisher, who had petitioned onto the November ballot.

Sen. Edwin A. Gomes, D-Bridgeport, who turns 80 in February, stood outside the polls at the Wilbur L. Cross School from 6 a.m. until the polls closed at 8 p.m., pleading with voters to reject Ganim’s return to the office he disgraced.

“I attended every day of his trial,” said Gomes, who endorsed Foster as the last, best hope to stop Ganim. “We know what happened.”

“This city deserves better,” said Christopher Caruso, a former Democratic legislator now employed by the administration of Gov. Dannel P. Malloy, the Democrat who left no doubt he preferred nearly anyone to Ganim.

Foster, a University of Bridgeport vice president and co-founder of the city’s minor-league baseball team, the Bluefish, had taken encouragement at nightfall by what she described as a heavy turnout on an unseasonable warm fall day. 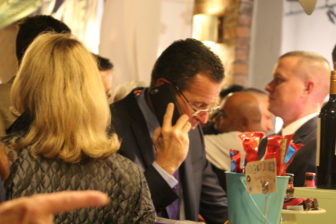 “It means that unaffiliateds and Republicans are engaged. I think people are understanding, we just have to move this city forward,” Foster said an hour before the polls closed. “It’s been a positive, energizing day for me.”

She misread the signs.

Unofficial returns showed Ganim winning easily in a seven-candidate field, 11,198 to 6,029 for Foster and 2,838 for Republican Rick Torres. The total vote for Ganim’s six opponents was 9,528.

His win set the stage for the Democratic Party to awkwardly embrace its prodigal mayor. Democratic State Chairman Nick Balleto appeared on stage to offer the party’s congratulations.

Malloy kept his distance, choosing to celebrate instead in Hartford, where his former counsel, Luke Bronin, was elected mayor of the capital city. But the governor, who said recently that Ganim did not deserve the Democratic nomination, was conciliatory.

“I already called him to congratulate him. I didn’t get him. I left him a message on his cell phone to tell him I look forward to working with him,” Malloy said.

Ganim, saying he was unaware of the call, made clear later there was no snub of the governor.

“He doesn’t have to call me, I’ll call him,” Ganim told reporters, shortly before leaving, surrounded by an entourage. “This is about the city, the state’s largest city. It’s about the next four years of improving the quality of life. I look forward to working with the governor.” 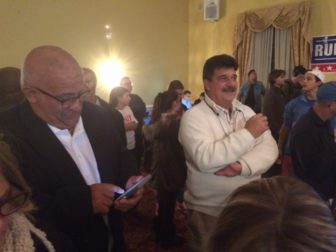 Face in the crowd: Joseph Santopietro, a former Waterbury mayor.

If elections are about the future, his campaign was about an eventful past. He ran as the man who was elected at age 32, taking over a city whose previous mayor had tried to place it in bankruptcy. Voters, he said, associated him with better times, not scandal.

He never used the word scandal. There was no need. He told reporters, “You know the story.”

Sitting with reporters in a corner of the banquet room was Lennie Grimaldi, a co-conspirator who returned from his own much briefer stay in prison to begin a political web page with the pitch-perfect title, “Only in Bridgeport.”

As positive returns were posted and victory was assured, the sound system at Ganim’s victory party came alive with the thudding bass line of  “Eye of the Tiger,” the theme song from the movie Rocky III, a tale of a fighter’s redemption after failure.

“Hey, they’re playing my song,” said Joseph Santopietro, the former mayor of Waterbury, who did federal time for corruption. He stood with his brother Jeffrey, who had cued up a Rocky theme upon Santopietro’s return from more than four years in prison to a raucous homecoming in 1996.

“The people of Bridgeport love him,” Santopietro said of Ganim, whom he called a friend, a good man wrongly denied the return of his law license. “Everybody deserves a second chance.”