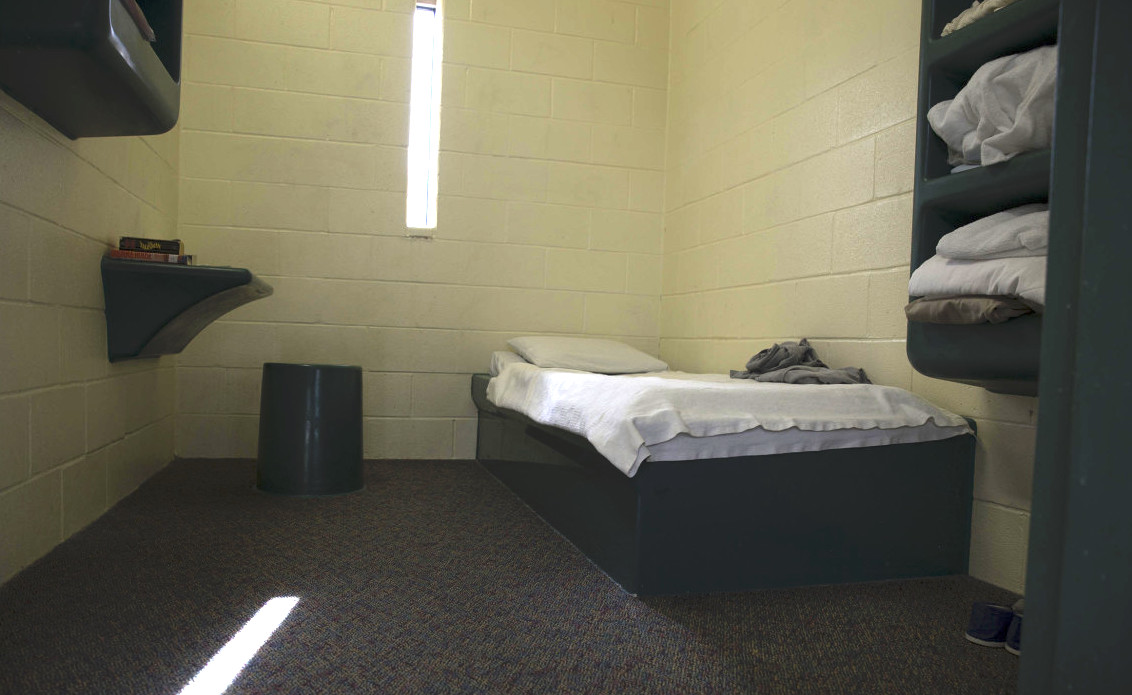 Listen to the story

This story was originally broadcast on WNPR and published at WNPR.org.

Middletown – Connecticut has received national attention for juvenile justice reforms, like its efforts to reduce the number of kids in the system. But advocates say a black eye remains.

For years, critics of the Connecticut Juvenile Training School have called on lawmakers to close the facility for delinquent boys, saying youth — especially with a history of trauma — aren’t being helped.

There’s no question CJTS is a locked facility. But don’t call it a jail, said Superintendent William Rosenbeck.

“The rooms do lock. This is a secure facility — a facility that has a dual mission to rehabilitate, and not to punish,” said Rosenbeck. He was leading the tour on the day we visited.

There were security guards inside the main entrance, and a metal detector. Behind the front desk was a room with tinted windows, where staff can monitor security camera feeds from all over the campus.

We couldn’t help but notice a jarring sound while walking the hallways. It was the sound of the door locks being disengaged remotely by staff in the security control room.

Rosenbeck summarized what we would be able to see. “We’re going through the visitation area,” he said. “We are going to go on campus, and start at the intake unit.”

Once through the visitor building, we started to get a different picture.

Rosenbeck described the open campus with eight buildings that surround a type of quad. The boys live in separate buildings, grouped by age. The 15- through 17-year-olds live in Building 5, and those 17 and older live in Building 6.

On the day we visited, there were 65 boys there. There was also a building for kids who were just starting their six-month commitment at the training school. It was called the intake unit, and that was where Rosenbeck led us next.

The unit was shaped like a Y — some called it a pod — with 18 rooms for the juveniles. Only five of the rooms were occupied.

Linnette Gaunichaux, the unit leader, showed us one of the rooms. She asked another staff member to “pop,” or unlock, the door.

There we got a sense of why critics have said the training school is modeled after a jail.

The rooms were very small: just enough room for a small desk and a bed, both made of a type of plastic with no sharp corners.

Staff control when the doors are unlocked, and that’s led advocates to question how much time youth are locked in their rooms when there are behavior issues.

Gaunichaux has worked with juveniles committed to DCF for a number of years. She said there will always be a need. “It’s going to happen. We are always going to need a place like CJTS,” she said. “I’m not saying everyone needs to be in CJTS, but you are going to need a facility.”

From there, Superintendent Rosenbeck showed off the Cady School, one of the buildings just opened last year after the youth population swelled to 150.

The classrooms included technology and equipment you’d see in a regular school. There were classes where kids learned different vocations, from culinary arts, to hair styling, to building trades. There were also rooms for art and music therapy, and the campus had a greenhouse, too. 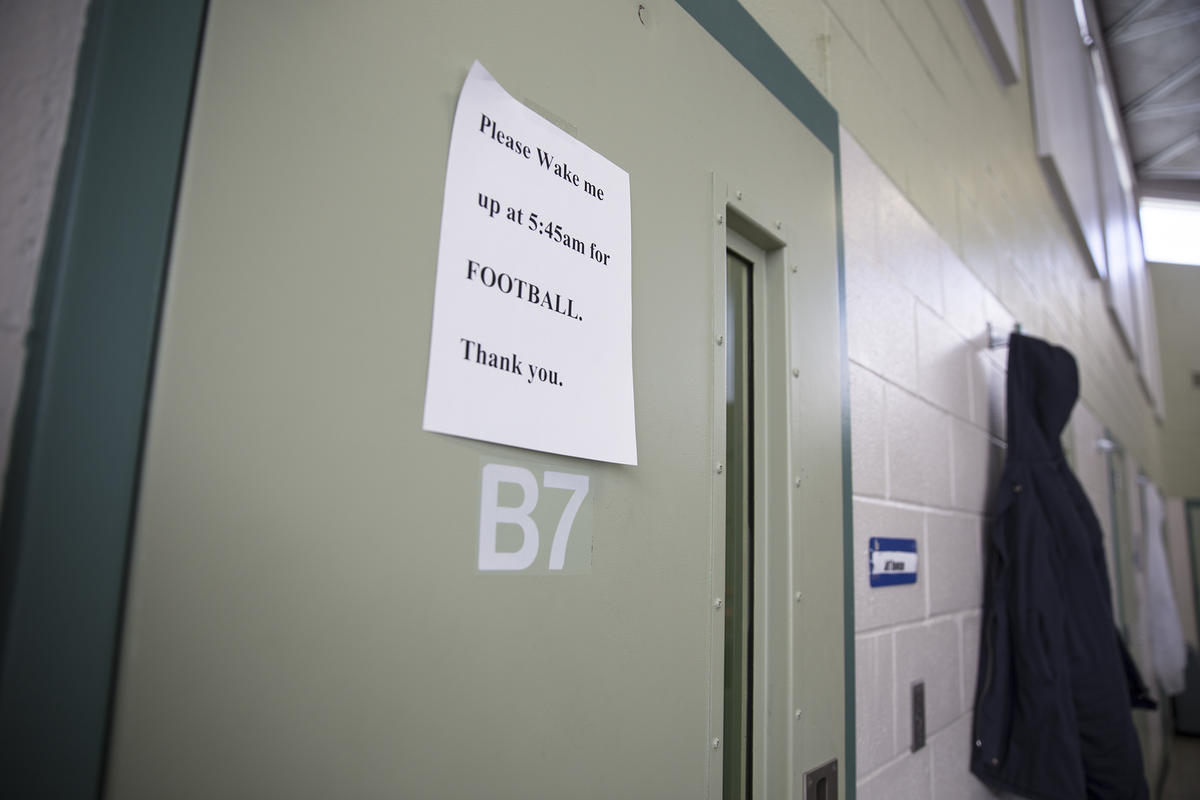 A bedroom door at CJTS

Staff highlighted these programs to show that the facility doesn’t fit the definition of a jail.

While the programs were meant to rehabilitate youth, staff also admitted that many of these kids come back to CJTS more than once.

Each Monday, staff at the intake unit go over some of the new commitments. In the room were youth service officers, nurses, and teachers. They listened to the clinician go over each case.

The clinician read from a report. “He is 17 years old; from Winsted; he came to us on November 5 after receiving an 18-month commitment on charges of larceny and criminal mischief,” the clinician said. “He does have a history of suicidal ideation. He was hospitalized five times for expressing that he wanted to kill himself — attempted to jump out of a second-story window.”

Advocates will say this kind of child is not well-served in a locked-down setting like the training school.

A report from the Office of the Child Advocate last summer highlighted problems at CJTS with staff using improper restraints and secluding kids, many who have experienced trauma in their lives. 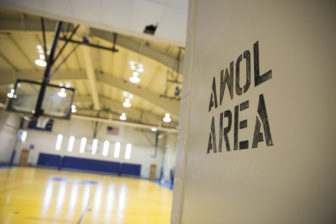 The gymnasium inside the Cady School at CJTS.

Rosenbeck said DCF is addressing those concerns, and he believes the millions the state allocates to operate the training school is necessary.

“We did make some mistakes in some of our interventions,” Rosenbeck said. “But the majority are done very successfully by many staff, and many incidents don’t occur because of relationships staff has with kids.”

The staff believe it’s wrong solely to blame the training school when looking at high re-arrest rates among this population. They pointed instead to gaps in the community that lead youth to problems like skipping school — and later, criminal behavior.

Martha Stone, executive director of the Center for Children’s Advocacy, is an outspoken opponent of the training school. But she does agree that more needs to be done in the state to keep kids out of the juvenile justice system from the beginning.

“A lot of kids are not performing at grade level when they get out,” Stone said. “So whenever they make a little bit of gains at CJTS, or wherever they are, they go back into these huge high schools that are failing a lot of kids.” 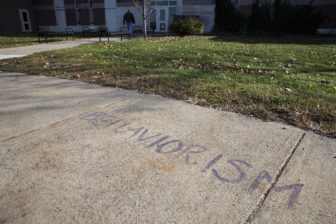 Stone thinks Connecticut should follow the example of other states like Massachusetts and Missouri, which have closed their training schools, and invested that money into other community supports.

The tour at CJTS ended on the football field — another activity youth are able to participate in, as long as they are on good behavior, and doing well in class. Nonnewaug High School had sent its team by bus to play against CJTS’s Hawks.

Listening to the sounds of the game made us forget that we were inside a locked facility for juveniles. Until we looked up, that is.

Spectators, including parents, had to watch the game from the driveway above the football field, behind the high fence surrounding the Connecticut Juvenile Training School. 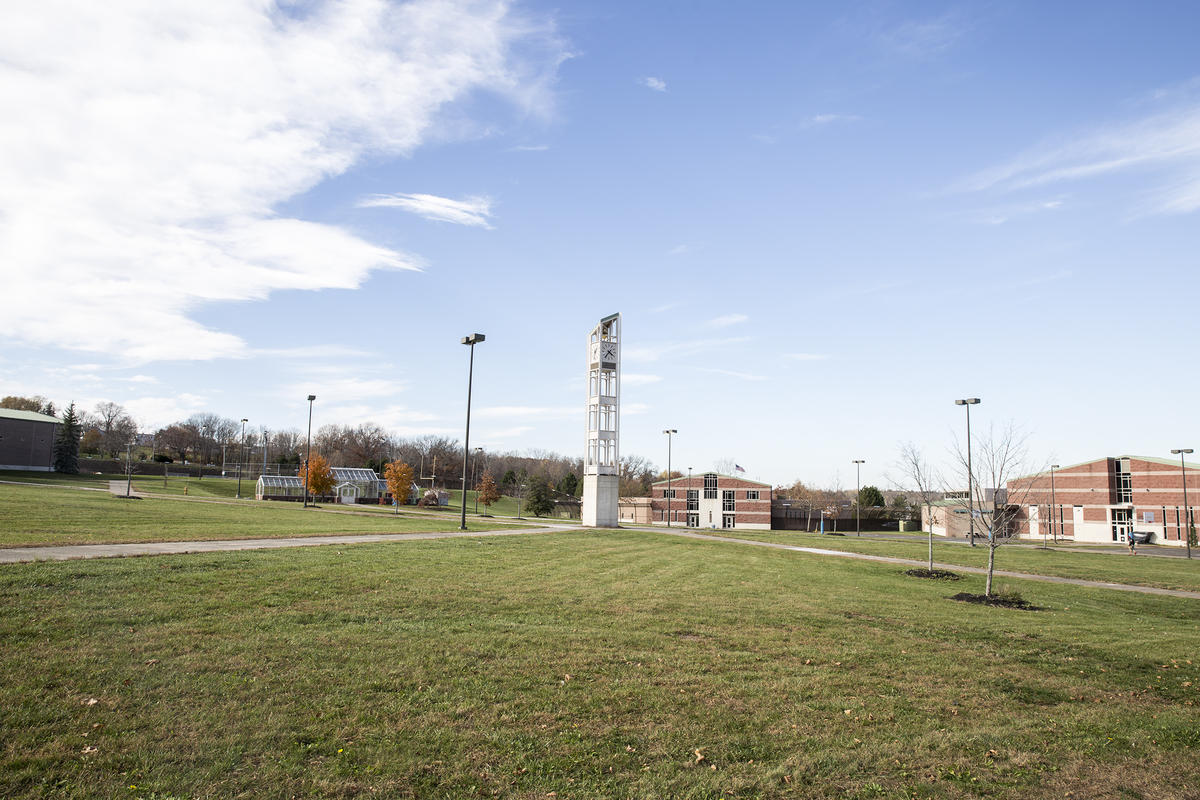