Mary swore, yelled and refused to go into her cell for the night until she saw a nurse. Ted Buonocore, a rookie youth services officer at the state-run jail for juvenile girls in Middletown, says he watched from a distance while three staff members tried to calm the girl.

In his report, he described the girl as physically resisting efforts by the other staffers, slamming an officer “onto the floor in a thrashing motion.” Buonocore says he intervened, grabbed the girl by her shoulders, pushed her onto a bed and pinned her.

In a facility where a state watchdog says there were numerous incidents involving the unlawful restraint or seclusion of juveniles, the incident was remarkable for one reason: It cost Buonocore, who was still in a probationary period without civil-service protection, his job.

It was one of only two cases during the 12-month period ending June 30 in which the Department of Children and Families moved to discipline staff for improperly restraining a youth at the Connecticut Juvenile Training School for boys or the neighboring Pueblo Unit for girls.

DCF officials determined that Buonocore had used poor judgement in handling the incident and fired him, although he later submitted a letter of resignation.

The disciplinary records were recently released by DCF, nine months after they were sought by The Mirror.

The Office of the Child Advocate, the state watchdog agency that investigated the juvenile jails over the same 12-month period during which the two disciplinary cases arose, reported DCF declined to investigate complaints it filed over the course of the year. 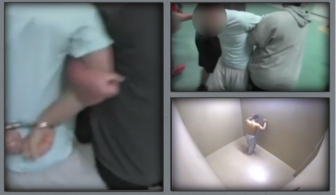 Nathan being dragged into a padded cell at CJTS, where he attempts to injure himself.

The child advocate, Sarah Eagan, released eight surveillance videos last week to support her findings that restraints and seclusion are overused at the juvenile jails and that conditions there are “dangerous.” State law only allows the use or restraint or seclusion when there is imminent danger of harm to the resident or others.

No DCF staff have been disciplined for incidents shown in the videos the child advocate released.

The records DCF released also show no employees were disciplined for inappropriately secluding youth last fiscal year. The child advocate’s investigation found that hundreds of children had been put in seclusion for extended periods of time during the year.

In the second disciplinary case, John Trammell, a police sergeant at CJTS, was reprimanded and returned to work in May. It was the fourth time that Trammell had been disciplined over improper restraints since 2005. Neither Trammell nor Buonocore could be reached for comment.

DCF also provided records showing two other staff not in their probationary period were disciplined outside the time frame of the watchdog’s investigation, one in March 2014 for a 2013 incident and another last week. The employee in the 2013 incident was allowed to resign and withdrew a union grievance. The most recent separation can still be appealed.

“Our obligation to serve these youth is just as great as it would be for any other child. Accordingly, we have taken needed disciplinary action with four staff, and three no longer are employed with the Department,” DCF Commissioner Joette Katz said when releasing the disciplinary records Friday. “The overwhelming majority of our staff are dedicated and caring as they conduct their work every day at these programs. We are confident that a committed, talented and caring staff – coupled with our proactive reforms – will continue to provide a therapeutic environment to children who need it most.”

But Nancy Alisberg, an attorney with the Office of Protection and Advocacy for Persons with Disabilities, which assisted the child advocate with her investigation, said the number of disciplinary actions “seems low to me.”

“It’s either low and more people should have been held accountable, or it’s low because staff was just following protocols,” she said.

How those who work at the state-run facilities respond to youths unwilling to follow orders has been at the center of recent controversy after the release of the videos. The videos show youths being tackled by staff and dragged into solitary confinement, where some can then be seen attempting to injure themselves.

“Viewed in their entirety from beginning to end, the videos of restraints at CJTS and the Pueblo Girls Program show the difficult work staff confront serving the most challenging youth in the juvenile justice system. I am concerned about certain of these videos,” said Katz, pointing to reforms the department has made since the videos were taken. “We owe it to youth and staff to provide all the support and training to avoid these dangerous interventions.”

One staff member, who says he has filed a whistleblower complaint with the state Auditors of Public Accounts, said he has been raising concerns about seclusion for years.

“They send kids to their rooms so they don’t have to work,” said James Weatherby, a longtime youth service officer at CJTS.

Emails Weatherby provided show him regularly telling management beginning in October 2010 that he was concerned about the practice of ordering youths to stay in their rooms, though staff do not lock the doors from their control panel. It may not be considered seclusion, he said, but if youth leave their rooms they are considered to be non-compliant and can get into trouble.

In an interview, Weatherby said, “Room time, reflection time, take space, time outs — they are all a euphemism for seclusion. Why won’t management put it in writing clearly and unequivocally when and how these approaches are to be used?”

The Department of Children and Families declined the Mirror’s request for information on how often youth are restrained or secluded and how often youths are injured during these interactions. Requests to review 190 grievances, with the names removed, that youths filed last year with the DCF ombudsman’s office about their conditions of confinement also were denied.

“Information related to a child while in the care or custody of the commissioner of DCF is a confidential record,” Thomas De Matteo, the department’s assistant legal director, responded in August to repeated requests from The Mirror beginning in December.

According to a copy of the ombudsman’s annual report for calendar year 2014, provided to The Mirror by a source, a “major theme” of the complaints filed by boys at CJTS are related to seclusion policies and procedures. Four of the complaints were referred to the agency’s hotline that investigates allegations of abuse or neglect and two to human resources.

Commissioner Katz has said that disciplining employees can prove challenging.

“There have been stipulations. There have been terminations, and then we have been forced to take some of them back,” Katz said during a lengthy interview on WNPR shortly after the child advocate released her investigation. “I can tell you there have been a number of cases referred to [human resources] and consequences taken. It’s much easier if a person is in a working test period. Then we are able to terminate them. So that’s a lot easier. If that’s not the case, then we have to work with the unions and with HR and, hopefully, if it’s just an issue of training, I am really happy to do it. Sometimes it’s a little more complicated than that.”

But the union leader for the youth services officers at CJTS and Pueblo said the process that affords accused staff with due process is fair.

“We are far from being an obstacle… Staff are properly remediated for bad behavior,” said Paul Lavallee, the president of AFSCME 4 Local 2663. “People are doing the best they can do. Do workers make mistakes? Yes. But you have to look at intent. Workers should not be disciplined unless you can prove the workers’ intent was malicious. It doesn’t take discipline to be better. It takes better training.”

He said management is to blame for any systemic problems since they are responsible for setting expectations and improving the culture inside the facilities.

“When’s the last time they fired a superintendent for mismanagement? Look and see how often management took action. Why didn’t management see anything wrong, and why didn’t they address it and make directives?” he said.

He said that staff try to avoid restraining youth, a practice that often ends with staff being injured. Trauma experts also say it is detrimental to improving youth behavior.

Last fiscal year, 151 staff reported being injured after forcibly restraining a child at the Connecticut Juvenile Training School for boys. Eight staff were injured at the neighboring Pueblo Unit for girls. Those injuries cost the state nearly $1 million in workers’ compensation claims for lost time or medical bills, reports the Department of Administrative Services.

Lavallee also said that staff too often are required to work overtime, something that can contribute to low morale and exhaustion.

Overtime costs at CJTS were $3.2 million last year, and the state spent nearly $300,000 in overtime at the much-smaller Pueblo Unit.