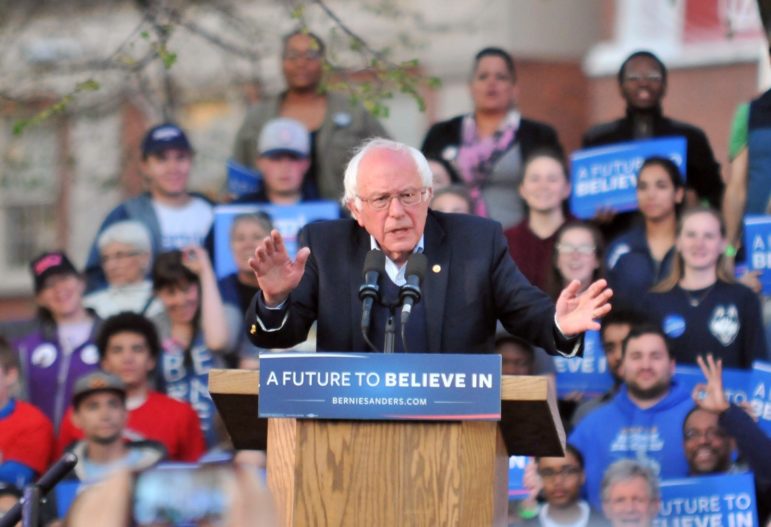 New Haven – Bernie Sanders lit up The Green as the sun set Sunday, railing against an economy and political system he says are controlled by an oligarchy, repeatedly jabbing at his Democratic rival, Hillary Clinton, as a candidate of wealth and Wall Street.

A Weekend of Presidential Politics in Connecticut

His message was as raw as his voice, offering no sign of a softening in his attacks on Clinton, a front runner whom the Democratic establishment insists is the eventual nominee. His voice echoed across the Green, and the applause of a crowd city officials estimated as high as 14,000 echoed back.

“Let me thank you for having the courage and the vision to be part of a political revolution, a revolution that will not just elect a new president but transform the United States of America, a movement that will create a government that will represent all of us, not just the one percent,” Sanders said.

Sanders spoke for an hour, stopping only to direct medical personnel to a bystander who collapsed in front the stage near the end of the rally. He ended with a plea for Connecticut, a state with a history of going for underdogs in Democratic primaries, to back him in a revolution.

“I can’t do it alone, because Wall Street and corporate America and the corporate media and the wealthy campaign contributors are so powerful that no one person can do it alone,” Sanders said. “What we need are millions of Americans – working people, middle class people, young people – standing up and saying it as loudly as they can, ‘Enough is enough!’ ” 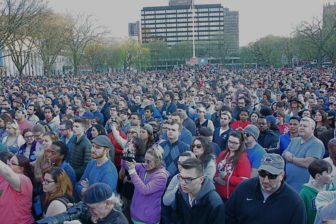 The crowd estimate from city parks officials was 14,000. At the lower right are a 16-year-old volunteer, Ryan Gulick, and his undecided father, Steve.

He took a jab at Gov. Dannel P. Malloy, who with the rest of the state’s establishment is supporting Clinton, for cutting mental health services. His most recent budget makes cuts, but his administration says spending on mental health still is higher than it was four years ago. Sanders says voters should resist calls for austerity if it means the ill and poor go unserved.

His final message was a plea to turn out in record numbers.

On a weekend when both Democrats and two of the three Republican presidential contenders campaigned in Connecticut, one of five states with presidential primaries Tuesday, Sanders was the only candidate to stage an outdoor rally and drew by far the largest crowd.

The city’s Office of Emergency Operations said 6,800 people had cleared screening checkpoints and were admitted into a fenced area in the northeast corner of the Green. A larger number watched from beyond the perimeter, according to a parks official. 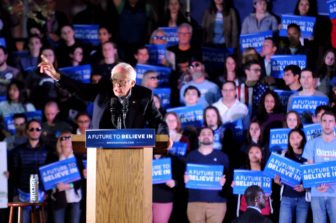 He began in daylight and ended after the sun set.

If the Democratic leadership is looking for Sanders to recalibrate his message to focus on the GOP field of Donald J. Trump, Ted Cruz and John Kasich, it will have to wait at least until after the votes are counted on Tuesday.

Clinton, whose campaign hoped the senator from Vermont might ease up after a decisive loss in the New York primary, ignored Sanders at a smaller rally Sunday at the University of Bridgeport. Sanders described Clinton as timid on energy policy and willing to take only half measures on economic justice.

“She wants to raise the minimum wage to 12 bucks an hour. Not good enough!” Sanders shouted. “Together we are going to raise it to 15 bucks an hour.”

He offered faint praise for Clinton.

“Unlike Republicans, Secretary Clinton understands that climate change is real. That’s a good thing,” Sanders said. “But if we’re going to transform our energy system, we have to have the guts to stand up to the fossil fuel industry and impose a tax on carbon. That’s a way to transform our energy system. That’s my view. That is the view of leading environmental economists all over the world. That is not Secretary Clinton’s view.”

The crowd started building early, arriving when the sun still warmed the Green adjacent to the Yale,where a concert ended as the rally began, possibly adding to the crowd. They left in darkness, the air cool.

Yale was a foil for Sanders, who says New Haven is a metaphor for the gap in the U.S. between the haves and have-nots: He noted Yale had a $24 billion endowment, but 36 percent of the city’s children live in poverty.

Ryan Gulick, 16, of Fairfield convinced his father, Steve, to take him. Ryan’s been phone-calling for Sanders. His father, an unaffiliated voter who used to be a Republican, said his son has been putting on the hard sell at home, but he’s not ready to commit.

“I think all the choices are pretty bad this year,” he said.

The Rev. John Henry Scott III, who also is a lawyer and a college instructor, hustled for volunteers with a life-sized cutout of Sanders. With a preacher’s voice, he had little trouble being heard over the pre-rally playlist that included, “Power to the People.” 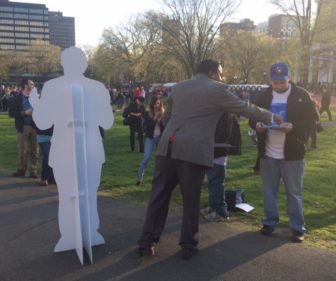 The Rev. John Henry Scott III and a cutout of Bernie Sanders reach out to potential volunteers.

Scott, who wore a clerical collar, says he is feeling the Bern, but he’s also preaching love for the woman trying to deny Sanders the nomination.

“I love Hillary. I love Bernie. I’d love there to be a unity ticket,” Scott said. “That’s the best way they can beat the GOP team.”

He said the Democrats failed to make peace in 1980, when Ted Kennedy challenged Jimmy Carter, and it cost them a chance to compete with Ronald Reagan.

Dhrupad Nag, the political director of the Working Families Party, which has endorsed Sanders, handed out Sanders posters and asked to take pictures of the recipients to post on Facebook.

“You can still have the poster,” Nag said.