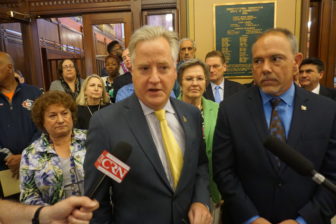 Gov. Dannel P. Malloy’s line-item vetoes of $22 million in spending, primarily from undisclosed municipal aid accounts, will stand as the House and Senate disagreed Monday on whether to attempt election-year overrides.

Senate President Martin M. Looney, D-New Haven, said his caucus concluded that overriding the line-item vetoes would be “largely symbolic,” since Malloy still could make the same cuts under discretionary authority granted him in the recently adopted budget. The Senate Democrats reached that decision knowing House Democrats were eager to override the vetoes and distance themselves from an unpopular Malloy.

The acquiescence by the Senate Democrats, who say they are prepared to override other vetoes not related to the budget, immediately became election-year fodder. Senate Minority Leader Len Fasano, R-North Haven, tagged them as subservient to Malloy and said the price eventually would be higher property taxes.

“It’s not surprising that they did once again cave to this governor. It speaks to the fact we need a change up here in Hartford,” said Fasano, whose caucus needs a net gain of four seats this fall to take control of the Senate for the first time in two decades.

Senate Majority Leader Bob Duff, D-Norwalk, noted that one of the line-item vetoes will trim only $20 million in local aid, but the Democratic budget still would provide more than $4 billion to cities and towns.

In a press conference before the Senate Democrats met privately to consider an override of the line-item vetoes, House Speaker J. Brendan Sharkey, D-Hamden, and House Majority Leader Joe Aresimowicz, D-Berlin, said the House was ready to confront the governor.

“There’s almost universal support for overriding the governor’s line-item vetoes that he issued a couple of weeks ago,” Sharkey said after a meeting with his caucus. “The cuts that are being proposed are, I think, too much to expect our municipalities to sustain this close to the new fiscal year.”

The cuts came after most municipalities already had adopted their budgets for the fiscal year that begins July 1.

“The administration needs to know we take municipal funding seriously, especially this late in the game,” Aresimowicz said.

“We still don’t know even know where those cuts will take place,” Sharkey said.

The governor’s budget office had not produced an analysis of how the municipal cuts would affect individual communities as Democrats in the House and Senate went into closed-door caucuses to discuss whether to attempt an override.

House Minority Leader Themis Klarides, R-Derby, said the Republican caucus was ready to help the majority Democrats reach the two-thirds threshold of 101 votes necessary to override the Democratic governor’s vetoes. With an 87-64 majority in the House, Democrats cannot override a veto without the GOP.

“We would like to thank Sen. Looney, Sen. Duff, and Democrats in the Senate for their work, and for choosing to keep our budget in balance,” said Devon Puglia, the governor’s spokesman.

Puglia said Sharkey’s comments were “misinformation and misdirection” to deflect attention from the inability of the House to pass the bail reform bill that the administration says was necessary to keep the adopted budget in balance.

“It was misinformation about previously agreed upon issues that are months and months old, and it was done to misdirect attention away from an unwillingness to pass legislation he’d agreed to pass,” Puglia said.

Looney said his caucus was ready to override the vetoes of eight regular-session bills, most of which Malloy vetoed as what he saw as legislative intrusions into executive-branch authority. One would have shifted responsibility for assessing the effectiveness of economic development assistance from the administration to the legislature’s Program Review and Investigations Committee.

House Democrats were scheduled to meet next Monday to discuss overrides of the eight vetoed bills.

Earlier, Sharkey was sharply critical of the governor for saying the failure of his bail reform bill necessitated the line-item vetoes. The administration says plans to close a prison at a savings of $15 million are jeopardized by failure of the bail legislation, which would have reduced the pretrial inmate population by eliminating bail for many minor crimes.

The Democratic speaker, who is not seeking re-election, said the administration has not made the case that a prison cannot be closed.

“It’s not been clear to me and to our members that this is even necessary, that these line item vetoes were even necessary,” Sharkey said. “I have still not received any explanation as to the connection between the $15 million and the bail bond bill. We all agree that we want to close a prison, and there is a $15 million price tag in savings to be realized from closing a prison.” 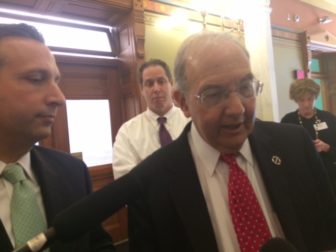 Sharkey also chastised the administration’s chief of staff, Brian Durand, for responding with “a three-page diatribe” to Klarides’ demand for the same information. Not only was it disrespectful, Sharkey said, “It did not answer the question she was asking.”

The override decision comes as legislators are looking ahead to re-election campaigns and the governor’s popularity is at an all-time low: A Quinnipiac University poll last week found Malloy with an approval rating of just 24 percent.

Looney downplayed whether there would be a political advantage for legislators to override an unpopular governor.

“I don’t necessarily think it has that impact,” Looney said. “It may. It may not. It’s a long time from now until the election, and I don’t think people make that kind of a connection in many ways.”

The House and Senate held technical sessions that opened a three-day window in which they can override the line-item vetoes. A similar three-day period begins next week for the legislature to override the governor’s vetoes of eight bills.

Malloy signed the state budget passed by the General Assembly, but used his line-item veto authority to cut the budget after the failure of the bail bill.

“We have to talk about it as a caucus, and if we were to make that decision to override we would then have to then find another $20 million in the budget for other cuts,” Duff said.

Whether the line-item vetoes stood or not, the administration has made clear that further cuts are coming in the next fiscal year. The budget authorized the governor to essentially make $189.3 million in discretionary cuts to keep the document in balance.

The governors’ Office of Policy and Management last Wednesday wrote state agency heads outlining how the $189.3 million in unassigned cuts would affect them and warned them that more cuts are looming in the following fiscal years.

Gian Carl-Casa, a spokesman for OPM, said no decisions have been made yet on which municipal accounts would shrink to accommodate the $20 million municipal-aid line item cuts.

Unless rejected by the legislature, those reductions would come on top of tens of millions in other cuts that cities and towns incurred in the state budget.