An artist’s rendering of an Amtrak high speed train in Boston.

Washington – Connecticut officials have been more critical than those in any other state of the Federal Railroad Administration’s plan to overhaul train service in the Northeast Corridor, yet some of its strongest critics also admit they like much of the plan.

New York and New Jersey officials have lauded the plan, which the FRA says would reduce travel time between New York and Boston by 45 minutes and between Washington, D.C., and New York by 35 minutes. Rhode Island officials came aboard after a stop in Providence was included. Maryland officials say they are studying the plan, called NEC Future, and Pennsylvania’s Gov. Tom Wolf said he supports the proposal but is concerned about its $135 billion price tag.

There are powerful supporters of the plan in Congress, including Senate Minority Leader Charles Schumer, D-N.Y., who said: ”I’m going to continue my laser-like focus on making improvements throughout the NEC,” beginning with a new tunnel under the Hudson River.

But, because of concerns over a proposed bypass that would run through Old Lyme and other scenic coastal towns, the FRA’s plan, released last month, was greeted frostily by Connecticut officials. The plan proposes a new segment of track between Old Saybrook and the village of Kenyon in Richmond, R.I.

There is support in the state for other parts of the plan. 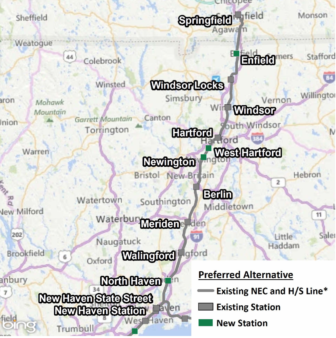 The New Haven to Hartford to Springfield, Mass., rail line.

The most favored is the NEC proposal to upgrade the rail line that runs through the center of the state, from New Haven to Hartford and then Springfield, Mass.

The proposal, however, does not include new rail service to Bradley International Airport, something that had been promoted in comments from the public to the FRA. Instead, the state Department of Transportation is planning a van service from the Windsor Locks train station to the airport, a distance of about three and a half miles.

The Malloy administration opposes the coastal bypass, and has said it supports investments to maintain and improve existing rails in the state before building new lines.

The New Haven to Hartford to Springfield proposal would do just that, building on state efforts to improve the existing tracks, so the Connecticut Department of Transportation supports that part of the NEC plan.

Sen. Richard Blumenthal, D-Conn., who deemed the plan’s coastal bypass “dead on arrival,” said, “The NEC plan, as a whole, is really important.”

Blumenthal said he likes the plan to upgrade the New Haven to Hartford to Springfield line and the idea of overhauling the rails in the Northeast Corridor.

“I’m a very strong supporter of the overall goal of making the rails safer, faster and more reliable,” he said. “The overall plan should be supported.”

NEC Future also proposes a new two-track line from New Rochelle, N.Y., to Greens Farms in Westport. Those new tracks would deviate from parts of the existing route through Fairfield County, running parallel to I- 95, through Greenwich, Stamford, and Norwalk.

The new segment would allow for more trains to operate between New York and Boston and for express trains to pass local or freight trains, the FRA said.

Stamford Mayor David Martin said he likes the plan to expand capacity at Stamford’s busy train station. He also likes that the FRA chose to upgrade and add to the existing route in lower Fairfield County instead of running a new line through Danbury, which was one of the earlier proposals.

But Martin, and Blumenthal, are concerned about the placement of the new tracks from Greenwich to Westport.

“Some of the maps show re-routing the rails thorough downtown Stamford,” Blumenthal said. “ One of the issues is, ‘which maps are really correct?’”

The Business Council of Fairfield County last week wrote FRA Administrator Sarah Feinberg, saying they appreciated that the final NEC Future plan included the existing rail in the county. But it said it was concerned about proposed new aerial structures and embankments.

It asked for larger copies of maps in the plan, with I-95 and U.S. 1 clearly marked.

“Its difficult to grasp the alignment without those important landmarks,” the letter said.

It also questioned why the new tracks would end at the Greens Farms station, which is not a major station, and there is no proposal to remove a train-delaying “S-curve” in the tracks in Bridgeport or to upgrade the Stamford train station “which is an eyesore to the community.”

“There are so many unanswered questions,” said Joseph McGee, vice president of public policy at the council.

While McGee said there is great support for the plans to upgrade the rails along the existing corridor and thorough the same cities in Fairfield County, “the proof is in the details.”

FRA spokesman Matt Lehner said the maps released by his agency “are not the exact alignment” but rough estimates of the NEC’s preferred route.

McGee said the state and local government does not have the “capacity,” to do such planning .

“That’s a federal responsibility,” he said.

The FRA’s recommendations are the product of four years of input from states, elected leaders, civic organizations and members of the public. Each of the states involved will have an opportunity to enact the FRA recommendations, but there is no definitive timetable to begin construction should the proposal be embraced.

But while the FRA says the states are in the driver’s seat, residents of Old Lyme have been fighting with the agency over the proposed 30-mile bypass of some twisted and curved rails along the coast. They say the bypass would ruin the historic heritage of many coastal towns and have recently found an ally in Rhode Island.

Unlike residents of  Old Lyme, who have been fighting the NEC plan for more than a year, Ruth Platner, chairman of the planning commission in Charlestown, R.I., said she and other city officials became aware of plans to run the bypass though her town only recently.

Besides ruining the historic character of Charlestown, the bypass could despoil a natural preserve and other environmentally sensitive areas. “We’re a small, highly populated state with few open areas so this is important,” she said.

The town has scheduled a Jan. 10 public meeting to make a formal response to the FRA about NEC Future and has invited Sens. Jack Reed, D-R.I., and Sheldon Whitehouse, D-R.I., who are supportive of the plan.

There is a 30-day public comment period on the plan, ending on Jan. 31, which could prompt the agency to make changes.

“Southwestern Rhode Island just woke up on this. They are feeling sold out,” said Gregory Stroud, who, as the former executive director of SECoast, been fighting the bypass.

To try to win over the residents of Old Lyme, the FRA proposes digging a tunnel, instead of putting the rails on an elevated structure in town. But that has not changed the opposition in Southeast Connecticut to NEC Future.

SECoast and the Connecticut Trust have asked the FRA to extend the 30-day public comment period to 90 days.

“Given the enormous size of the planning document, its release just one week before end-of-year holidays and the extreme concern for the preferred alternative route now expressed in communities throughout coastal Connecticut (and additionally Rhode Island), we believe there is a strong argument that such an extension is in the public interest,” the groups’ letter to the FRA said.

The request was rejected.

“The end of the comment period is set for Jan. 31,” Lehner said.

A second step in the process would then begin – a detailed environmental impact study of the proposed routes called “Tier 2.” 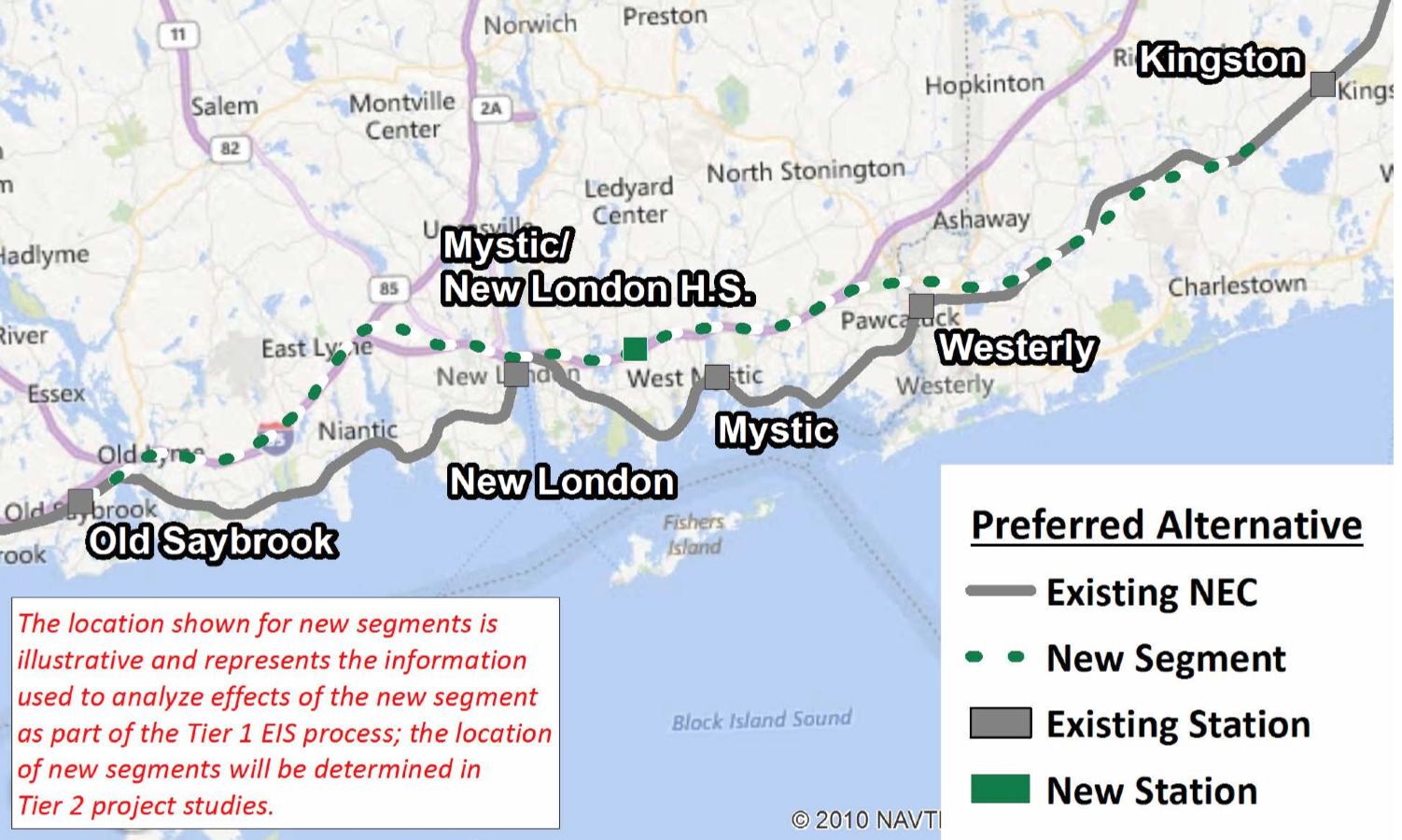 The proposal for a new rail route through southeast Connecticut. The Federal Railroad Administration says the route shown is “representative” and will not necessarily be the final route, which will be determined by states in the next phase of project planning.

Covid-19 has brought on a behavioral health tsunami, a crisis in the brewing even before the pandemic.

Opinion Abolish solitary confinement. Start with oversight of the Department of Correction

The Department of Correction is unfit to decide who deserves solitary confinement. We must choose humanity over convenience.