Malloy proposal today to kick off a grueling budget season 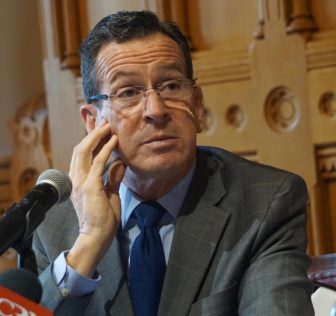 Though Malloy has said he wouldn’t “lead with taxes” or propose any major hikes, he wouldn’t rule out changes to tax credits and confirmed he would recommend elimination of a popular $200 property tax credit within the state income tax.

His proposal also would enable communities to levy property taxes on hospitals while bolstering state payments to those facilities as part of a plan to leverage more federal aid.

Transportation advocates hoping to see tolls or other new revenue-raising plans to rebuild Connecticut’s infrastructure are expected to be disappointed. Malloy has said he wants to see the legislature approve a constitutional “lockbox” amendment to safeguard transportation revenues before he proposes any new funding schemes.

“This is a budget that is unlike any other budget that has been proposed in recent times,” Malloy told Capitol reporters late last week.

Surging retirement benefit costs, triggered by more than seven decades of inadequate state saving, are one of the major factors behind significant deficit projections for the next two fiscal years.

The administration says state finances, unless adjusted, would run $1.7 billion in deficit in 2017-18, and the shortfall would reach $1.9 billion in 2018-19. An earlier deficit forecast totaling $3 billion over two years recently was revised to reflect eroding tax revenues and the assumption that arbitrators would order raises for unionized workers in the next two fiscal years.

To help reduce costs, the governor is recommending that cities and towns cover nearly one-third of Connecticut’s annual contribution to the pension fund for municipal school teachers.

That would amount to $407 million of the $1.29 billion contribution in the upcoming fiscal year. Currently, cities and towns pay nothing toward this benefit.

Though some of that revenue would be used to help balance the state’s books, Malloy also said he would realign local aid to boost education grants to poor cities and towns.

“There will be a shift. There will absolutely be a shift,” Malloy, a Democrat, told reporters when discussing his new budget Tuesday in New Britain. “We are failing children because their parents are poor.”

His plan overhauls the highly criticized Education Cost Sharing (ECS) formula by changing how student poverty is determined and by creating a grant pool of roughly $575 million to help towns pay for special education.

The governor also has said his new budget will provide some assistance to help safeguard the city of Hartford from insolvency.

Luke Bronin, mayor of the capital city, warned state officials last year that city finances are in the red and that Hartford is at risk of having to declare bankruptcy.

To aid Hartford and other distressed municipalities, the governor will recommend allowing communities to levy property taxes on hospitals.

In return, the state would increase payments to hospitals made in conjunction with a controversial provider tax by about $250 million. Because this is reimbursed under Medicaid, though, federal payments back to the state would reduce Connecticut’s overall cost to just under $88 million per year.

The state also would save money by eliminating part of a grant program that reimburses cities and towns for a portion of the tax revenue they currently lose because of the hospitals’ property tax-exempt status.

Still hospitals may be cautious about any proposal to increase state funding given their recent experience with the controversial provider tax first levied on the industry.

Established in 2012 primarily as a technical maneuver to qualify for more federal health care funding, the state tax once collected $350 million per year from the industry while returning $400 million to hospitals.

Malloy’s new budget also is expected to establish a new municipal monitoring system overseen by an accountability review board that would recommend early intervention for financially distressed cities and towns before the risk of insolvency becomes too great.

Another key measure the governor will employ to help balance his next budget involves assuming his ongoing discussions with employee unions will result in concessions.

In anticipation of an agreement, the governor will build a $700 million savings target into the budget. Malloy anticipated $1 billion in annual concessions savings when he delivered his first biennial budget proposal in February 2011.

But because concessions are not a sure thing, the administration also is expected to develop an alternative scenario to achieve savings.

The $700 million target, like the revised deficit forecasts, is based partly on the assumption that arbitrators would order raises for unionized workers in the next two fiscal years. Any concessions deal presumably would nullify most or all of those pay increases.

Union leaders have said state officials should be considering raising taxes on wealthy households and corporations and should cut back on economic development grants, business subsidies, and state agency spending on private consulting and other service contracts.

Even with the labor savings and the new teachers’ pension costs imposed on cities and towns, the governor also said he would seek some additional new revenue in his budget, including some from taxpayers.

Malloy said he would not impose any major tax hikes, referring in particular to increasing the base rates of major levies, such as the income and sales taxes.

But the governor said he would look at changes to some of the credits and exemptions on the books, and announced last week he would recommend eliminating the property tax credit within the income tax.

The property tax credit first was enacted in 1995 as a compromise between Republicans, who favored a flat tax on wages, and Democrats, who argued for a more progressive system.

This provision enabled middle-income households to reduce their income tax obligation to reflect some or all of the municipal property taxes they had paid.

At its peak seven years ago, the credit provided $365 million in relief to an estimated 1 million income tax filers.

Since then, the credit has been shaved to $200 with tighter eligibility standards and is worth $105 million to an estimated 874,000 filers.

It would reduce insurance the premium tax by one-seventh, saving companies $11 million next fiscal year and $22 million in 2018-19.

One revenue debate Malloy is not expected to begin Wednesday involves the $42 billion in long-term funding options for transportation infrastructure — including tolls and gasoline tax increases — that his study panel outlined one year ago.

The governor, who laid out a 30-year plan to invest up to $100 billion in highways, bridges, railways and other infrastructure, has said he would not press for a revenue debate until lawmakers back a constitutional “lockbox” amendment to safeguard those revenues.

“Governor Malloy is committed to transforming our transportation system so that our infrastructure can help foster economic growth and attract businesses to the state,” Malloy spokesman Chris McClure said last week. “…I remain confident that the legislature, and ultimately Connecticut voters, will pass a constitutional lockbox.