On eve of budget vote, Malloy still in the dark 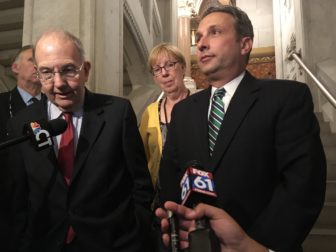 Not only has Gov. Dannel P. Malloy been shut out of bipartisan budget talks for three weeks, it’s become clear that the governor and his staff will have little opportunity to review or push for changes in a final budget bill before it is debated Wednesday by the Senate.

As late as 4:15 p.m. Tuesday, legislative leaders of both parties acknowledge they had not prepared all documentation for the review of a Democratic governor whose relationship with a legislature still dominated by Democrats is frayed, if not unraveled, over the inability to agree on a budget.

The absence of a budget document on an the eve of a vote frustrated not only the governor’s staff but lobbyists, who complained the State Police had ordered them to leave building at 5 p.m., the normal closing time, despite a House Democratic caucus that was expected to stretch into the evening.

The lobbyists were looking to obtain information, not influence lawmakers.

The answer to questions about the availability of a budget has been the same for days. On Tuesday afternoon, Senate President Pro Tem Martin M. Looney, D-New Haven, told reporters what he has been saying about the document since an agreement in principle was announced six days ago.

“That’s in the process of being prepared,” Looney said.

When is that process likely to be completed?

“Oh, I wouldn’t put a timetable on it, but soon,” Looney replied. “You know, it’s obviously in the works.”

“As soon as it’s ready, he will have it,” House Minority Leader Themis Klarides, R-Derby said. “We want to see it done, too.”

The bipartisan nature of the talks put Republican leaders in the unfamiliar position of defending, or at least trying to explain, the absence of details about a budget on the eve of a debate and vote.

Klarides and Senate Republican leader Len Fasano of North Haven typically have been critical of Democratic legislative leaders for delivering hundreds and hundreds of pages of budget documentation to the GOP for review only hours before a planned vote.

Democrats have held majorities in both the House and Senate every year since 1997 until this year, when Republican gains left the Senate deadlocked 18-18, though Democrats retained an edge because Lt. Gov. Nancy Wyman, a Democrat, can break tie votes. Democrats hold a slight 79-72 edge in the House. 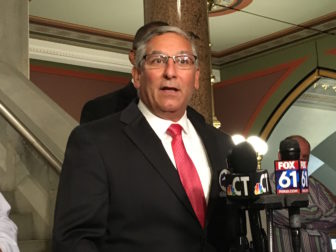 Democrats lost control of the budget debate last month, when three Democrats in the Senate and five in the House defected, helping the GOP to defeat a Democratic budget acceptable to Malloy and to pass an alternative vetoed by the governor.

Fasano said legislative staff worked through the night into Tuesday morning as legislative leaders made final adjustments to the new budget.

Administration officials “can look at any draft as far as I’m concerned,” he said. “There’s no hidden stuff.”

“I have yet to see a final draft,” Fasano said.

Malloy has said he was worried the proposal was out of balance, a serious concern given that the state’s emergency reserves are low. Connecticut has just $210 million in its so-called rainy day fund, which represents less than 1.25 percent of annual operating costs — far less than the 15 percent recommended by the state comptroller’s office.

Each of the four major Wall Street credit rating agencies has downgraded the state’s bond rating at least once since May 2016.

Connecticut still hasn’t paid off its operating debt from the last recession. Gov. M. Jodi Rell and the legislature borrowed $1 billion in 2009.

Still, legislative leaders said their relationship with the governor is not adversarial.

“I’m hopeful that the governor will sign this budget,” Looney said.

He noted that while Malloy hasn’t received full budget documentation yet, House and Senate senior staff briefed administration officials earlier today about some “highlights” of the two-year budget. “That discussion was quite positive.”

Duff said there is plenty for the administration to be pleased about, even though the governor’s staff was excluded from budget negotiations over the past three weeks as legislative leaders tried to strike a bipartisan deal.

The latest plan scaled back deep cuts proposed for the University of Connecticut in a Republican-crafted budget that narrowly passed the legislature in mid-September — and which Malloy subsequently vetoed.

The new plan cuts funds for UConn and its health center by about $65 million per fiscal year — a 17 percent reduction. The plan Malloy vetoed would have ordered a $120 million per year reduction.

Malloy has said he took a big step to help the legislature craft a plan by proposing to achieve unprecedented savings after the budget is in force.

The governor said he would hit savings targets of $838 million this fiscal year and just over $1 billion in 2018-19. Malloy balked when the Republican plan he vetoed tried to add $260 million to those targets over two fiscal years combined.

But Fasano said the new deal adds “less than $20 million” per fiscal year to each of the targets that the governor set.

Fasano also noted that all sides have to deal with disappointment in this new budget as legislators try to close projected deficits of $1.6 billion in the current fiscal year and $1.9 billion in 2018-19.

Senate Republicans are “very upset” that the plan does not alter state employee pension benefits after June 30, 2027 — when the existing benefits contract with worker unions expires, Fasano said.

The Senate GOP leader said his caucus also is upset that the new budget would increase income taxes on some middle-income households by reducing the credit that offsets a portion of local property tax bills.