A dozen House Democratic legislators pledged Monday to propose a bill in the upcoming legislative session to establish electronic tolling throughout highways in Connecticut – a pitch that has been made numerous times in recent years but has failed to win approval.

Proponents of tolls say the investment is necessary to bail out the fund that supports transportation construction projects, and dismissed criticism that the money would just be raided to help cover the state’s operating budget, as has been done in the past.

“I promise you if we do this, this state will thrive,” said state Rep. Tony Guerrera, D-Rocky Hill, the longtime House chair of the legislature’s Transportation Committee.

House Majority Leader Matt Ritter, D-Hartford, said the key is having voters this November approve locking in the revenue generated by tolls so it cannot be raided going forward.

“That is a win for Connecticut taxpayers. It’s a win for transportation advocates and it’s a win for businesses, because now you don’t have to leave three hours early to leave for Stamford,” he said.

Ritter and Guerrera’s support for tolls is not new, though they said they believe the growing recognition that necessary transportation projects don’t have a funding source could help the measure pass this year.

That’s still a tall order given that Democrats hold an extremely narrow majority of votes in the General Assembly, Republicans have not come out in support of tolls and Democrats are divided on the issue.

“Yes, this will be a tough vote, I get that,” said Guerrera, and for those against tolls, he asks, “What’s the alternative?”

“This issue will certainly be debated in the coming legislative session, and public opinion will likely move around once the location and number of tolls are defined and we learn how much revenue they will generate,” said House Minority Leader Themis Klarides, R-Derby.

“It’s reckless to rush to approve tolls before even understanding the economics of how they would work,” said Fasano. “Connecticut needs to consider ways to fund transportation without asking for more from state taxpayers who have already been drained enough.”

Ritter disagrees that the state could reprioritize its borrowing habits to save transportation projects.

“I just don’t see how it works,” he said, saying it would sideline other important projects and the state badly needs a new funding source for transportation. “We hope common sense prevails and this passes,” he said. 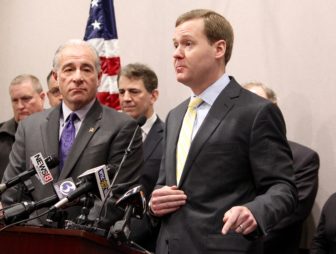 House Majority Leader Matt Ritter, right, and House chair of the Transportation Committee Tony Guerrera announce their plans to once again back tolls.

Democratic Gov. Dannel P. Malloy has hinted strongly he will propose additional funding to meet the transportation programs’ needs, both in the short-term and the long-term, in his next budget plan. That plan must be submitted to the General Assembly on Feb. 7.

The Malloy administration warned Wall Street credit rating agencies in November that the new state budget short-changes the transportation program. Absent more funding, the program is headed for dramatic contraction over the next five years.

On Jan. 10, the governor and DOT Commissioner James Redeker outlined nearly 400 capital projects worth $4.3 billion that would be suspended over the next five years because of inadequate funding.

Some of these reductions, they said, could begin as early as this year.

The governor, who proposed a 30-year, $100 billion program to rebuild Connecticut’s transportation system in February 2015, has had limited success since then securing resources for the program.

Lawmakers agreed in the spring of 2015 to dedicate a portion of sales tax receipts to transportation. This was deemed the key to funding the first five years of the program, through 2020. Much of the new capital spending in the first five years is focused on planning major projects.