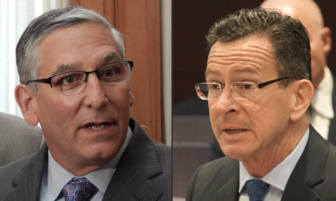 Gov. Dannel P. Malloy and the state Senate’s top Republican intensified their debate Tuesday over an issue expected to be the focal point in Malloy’s final budget proposal: transportation.

Fasano countered the governor and his fellow Democrats were rushing forward without sufficient information.

Though Malloy hasn’t disclosed specifics, the governor is expected to urge lawmakers to support higher gasoline taxes and tolls to fund a major transportation investment program.

One of the biggest challenges facing our state is the decades-long refusal to invest in our roads, bridges, tunnels, and rail,” Malloy spokeswoman Kelly Donnelly said Tuesday. “Yet, perplexingly, the Republican leader’s solution is to further slash our transportation investment.”

Malloy’s final budget is due on Feb. 7, the opening day of the regular, 2018 General Assembly session.

“Predictably, Senator Fasano is recycling his misleading and outdated talking points,” Donnelly said, charging the GOP plan “would undermine Connecticut’s ability to compete with neighboring states and directly harm the state’s economy.  In short, while Senator Fasano, who has no original ideas of his own, tries to score cheap political points, legislative Democrats are putting forward real proposals to move Connecticut forward.”

Shortly after a dozen House Democrats announced Monday a proposal to establish electronic tolling for Connecticut highways, Fasano said, “It is irresponsible to approve a law, and subject people to more fees, without understanding the magnitude of the impact on Connecticut residents. They’ve been taxed enough.”

Besides the toll proposal, which is spearheaded by Rep. Tony Guerrera, D-Rocky Hill, another revenue-raising idea for the transportation program involves raising the retail gasoline tax from 25 to 29 cents per gallon. Rep. Jason Rojas, D-East Hartford, has recommended this as a stopgap measure until the legislature decides upon tolls or some other long-term funding mechanism for transportation.

“I understand some people are desperate to look at tolls as a cure-all for a state that has been damaged by years of failure under Governor Malloy and a Democrat-controlled legislature,” Fasano said. “But it’s reckless to rush to approve tolls before even understanding the economics of how they would work.”

“It is beyond irresponsible to criticize other people’s ideas that immediately fund critical transportation infrastructure projects when the governor and Democrat lawmakers have zero answers themselves besides calling for more taxes,” Fasano added. “It is pathetic. The governor clearly still doesn’t understand the ideas Republicans have put on the table, nor does he care because in his world the only ideas that matter are his own.”

But Malloy and several other transportation advocates argue time is of the essence.

Absent more funding, that program is headed for dramatic contraction over the next five years.

Even with new sales tax receipts dedicated to transportation, and projected growth in revenues from a wholesale fuel tax, debt costs — much tied to efforts to reverse years of deferred maintenance — are expected to grow even faster.

The governor and Department of Transportation Commissioner James Redeker have said that, absent more funding, nearly 400 capital projects worth $4.3 billion would be suspended over the next five years because of inadequate funding. Rail and bus fares would be raised, some rail services reduced, and municipal road repair grants probably eliminated over that period.