Democrats made their first state legislative gains in 10 years Tuesday night, breaking an 18-18 tie in the Senate by picking up at least four Republican seats and defending vulnerable Democratic lawmakers who were targeted by the GOP. House Democrats appeared to have a net gain of nine seats, with eight unresolved races.

Other Democratic gains in the Senate were possible, with two races too close to call. Both of those seats are held by Republicans, but Democrats are leading with all the votes counted. Recounts are expected.

House Democrats, who began the night an 80-71 advantage, won at least 92, with the GOP capturing 58 and one race under review, Republican Noreen Kokoruda of Madison.

House Speaker Joe Aresimowicz, D-Berlin won by just 37 votes, which is less than one-third of a percentage point.

Senate Republicans who lost include Scott Frantz of Greenwich, Toni Boucher of Wilton, Len Suzio of Meriden, and Michael McLachlan of Danbury. Republican Rob Sampson of Wolcott won the seat being vacated by Joe Markley, the GOP nominee for lieutenant governor.

Boucher, who won the seat 10 years ago after six terms in the House, was defeated by 22-year-old Will Haskell, a recent Georgetown University graduate. Read about that race here.

McLachlan, who has represented the Danbury area since 2009, was unseated by Julie Kushner, the former director of UAW Region 9. Read about her here. 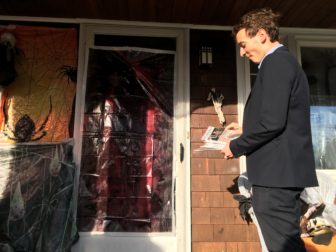 Democrat Will Haskell, 22, knocking on doors in Westport during his campaign.

Suzio, one of the state Senate’s most conservative members, was unseated by Mary Daugherty Abrams, a former teacher and the wife of a former House member.

Democrats were able to fend off Republican efforts to pick up the senate seat for the Milford and Orange region that was vacated by Democrat Sen. Gayle Slossberg.

House Democrats also flipped one seat that was vacated after a Republican left office. That race ended with Jason Doucette picking up Mark Tweedie’s seat.

With the victory by Rick Hayes of Putnam in the 51st District, House Republicans were able to pick up a longtime Democrat seat left open by Rep. Danny Rovero of Killingly retirement. But they  failed in their efforts to unseat several Democratic incumbents they deemed vulnerable: Michelle Cook of Torrington, Catherine Abercrombie of Meriden, and Pat Boyd of Pomfret.