Here are the bridges to be rebuilt by tolls, and the cost to cross them 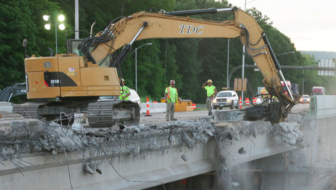 These are the 14 bridges that would be rebuilt or improved with money raised by tolls under Gov. Ned Lamont’s new CT2030 plan. The exact placement of the tolling gantries is unclear — though one of them is effectively in New York, thanks to an oddity of the interstate highway system.

Within a 24-hour period, any vehicle equipped with a transponder would not pay more than one round-trip user fee per gantry. Commuters without a transponder will be billed by mail and pay a 25% to 50% higher rate.

With a discount, the car ride from New Haven to Greenwich on I-95 would hit three 40-cent tolls and cost an EZ Pass holder $1.20. A drive between Danbury and Waterbury would hit two tolls and could cost between 80 cents and $1.60.

One of the bridges with minimal impact on Connecticut commuters carries I-684 across the Byram River in Greenwich. It is located in Connecticut, but it is on a stretch of I-684 that  juts into New York and cannot be accessed from any local road in the state. In fact, New York plows the stretch during snow storms, but Connecticut is responsible for the upkeep of the bridge.

These are the projects to be financed  by tolls and their construction cost.