With GOP on sidelines, Senate Dems cool to CT2030

Potential alternatives to tolls include sports betting and pot 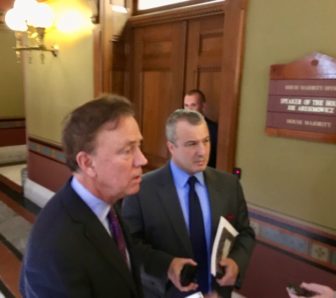 Gov. Ned Lamont will walk into the Senate Democratic majority caucus Wednesday morning to pitch CT2030, his new $21 billion transportation plan, knowing he has yet to find a full-throated champion for it among fellow Democrats in the upper chamber, only quiet sympathizers, wary skeptics and a few resolute opponents.

The governor is expected to reiterate what he told the House Democratic majority on Friday: He sees CT2030 as crucial to growing Connecticut’s stagnant economy, and anyone opposed to the limited highway tolls in his financing plan should be prepared to support an alternative capable of raising the same $320 million a year.

“You’ve got to have an alternative,” Lamont said. “I think people know now we need to do it. The question is how do you pay for it?”

“I think people know now we need to do it. The question is how do you pay for it?”

Fasano said the governor has a reasonable rationale for limited tolling: A toll is a user fee and an estimated 40% of the new revenue would come from out of state drivers. But he said the governor cannot overcome Republican suspicions that the number and price of tolls would increase, even if Lamont’s proposal would fix the scope and pricing in law.

“A lot of people would say if you paid for something you use, it makes sense,” Fasano said. “It’s a trust-in-government issue and future legislatures and legislators that are are going to say, ‘Tolls are here, let’s do more.’ And that’s where the plan is running into a wall.”

Looney was careful Monday not to rule out his caucus eventually being sold on CT2030, saying he had yet to gauge support since last week’s rollout. But Looney also said he expects Democrats to explore alternatives to tolls, including the legalization of sports betting and recreational marijuana.

Democrats hold a 22-14 advantage in the 36-seat Senate. Eleven are first-term senators, and five are in seats wrested from Republicans in 2018. Lamont could afford to lose no more than four Democratic votes and still pass CT2030. (An 18-18 tie would be broken by the presiding officer, Lt. Gov. Susan Bysiewicz.)

Rank-and-file Senate Democrats reacted cautiously, if not cooly, to CT2030 in interviews Friday and Monday, noting opposition to tolls has taken root since Lamont’s initial proposal in February and was a factor in some municipal races last week.

“I think the boat was missed.”

“I really wish this was the plan or the approach in February,” said Sen. Norman Needleman, D-Essex, noting that the new plan outlines projects to be built, an oversight February. “It’s not starting with, ‘Give me the money, and trust me’ ” 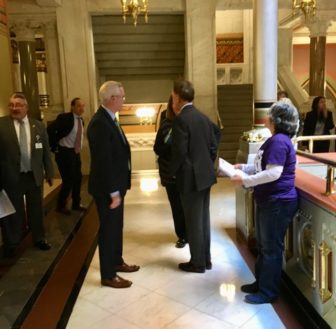 Lamont and his chief of staff Ryan Drajewicz on their way to meeting House Democrats last week.

Osten and Needleman are the two Democratic senators who also run their communities as first selectmen. Needleman was re-elected a week ago. Osten, whose vote for a tolls bill at a committee meeting was an issue during the election, lost.

“I don’t attribute it all to tolls,” Osten said.

Osten said the Republicans made her a target, capitalizing on a budget shortfall that she blamed on the Board of Education. And her reservations about the plan have as much to do with its reliance on some general-obligation borrowing, which she says should be used for capital expenditures other than transportation.

The GOP also flipped control of local governments in Wethersfield, Rocky Hill and Newington, where Republicans made tolls an issue, albeit to varying degrees.  All three communities are represented by Sen. Matt Lesser, D-Middletown, who was non-committal Monday about CT2030.

“I’m trying to understand how it affects my district, like everyone else is,” Lesser said. “I’m processing it, talking to local officials.”

CT2030 would remove a traffic signal on Route 9 that is the source of backups during weekday commutes and on summer weekends, when the state highway is taken to the shoreline by beachgoers. A toll would be placed on Route 9 to finance the $90 million to $180 million cost of redesigning the highway and constructing a new bridge to eliminate the current intersection with local roads.

The new plan cuts its reliance on tolling revenue by more than half. The original plan called for at least 50 gantries on Route 15 and Interstates 84, 91 and 95, raising nearly $800 million. CT2030 calls for tolls on 14 bridges, with the revenue dedicated to financing their repair, remodeling or new construction.

House Speaker Joe Aresimowicz, D-Berlin, and House Majority Leader Matt Ritter, D-Hartford, are generally supportive of CT2030, giving Lamont something in the House that he lacks in the Senate — a champion in the ranks of leadership.

“People have to stop being lazy legislatively and propose things and have a real debate and conversation on this. The intellectual dishonesty of saying no is unfair.”

Ritter said the backlog of transportation infrastructure maintenance, the need for improvements to speed up highway and commuter rail commutes, and the approaching insolvency of the Special Transportation Fund all demand legislative action.

“People have to stop being lazy legislatively and propose things and have a real debate and conversation on this,” Ritter said. “The intellectual dishonesty of saying no is unfair.”

But Weicker had a champion in Sen. William A. D-Bella, D-Hartford, the co-chair of the Finance, Revenue and Bonding Committee. Lamont has no one playing that role now, and the problem goes deeper than a reluctance to embrace tolls.

“I think people like me and others would be willing to champion the transportation initiative if they saw a governor who is more engaged and understanding the needs of the members and where they come from in their home districts,” said Sen. John Fonfara, D-Hartford, the co-chair of the finance panel.

Fonfara said the governor’s deep cuts in borrowing have undermined a range of legislative priorities, including the continued financing of affordable housing and the remediation of polluted brown fields, a major issue in cities struggling with an industrial past. Legislators would like to believe that Lamont has broader interests than transportation, he said.

“There is a lot [more] to their agenda than this one proposal,” Fonfara said, “And, heretofore, he has not been willing to entertain that.”