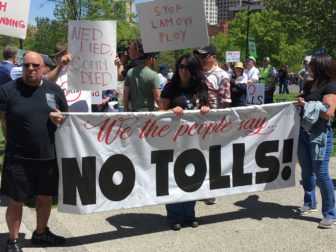 He has a statutory duty to present his latest budget and bonding proposals Wednesday to the legislature. But if he releases too many details — specifically any financing for recreational, social service or other community projects benefitting legislators backing his truck-tolling plan — then the latter could be at risk.

Lamont held up passage of a two-year bonding plan last May because, he said, the state couldn’t commit to long-term borrowing infrastructure projects until they knew how much revenue could come from a proposed tolling bill.

He said it made no sense to resolve bonding before transportation, because without tolls to support an infrastructure rebuild, Connecticut likely would have to redirect bonding away from other areas, such as municipal school construction and capital projects at public universities.

There will be “no bonding bill, certainly, until we know how we’re going to pay for transportation,” Lamont told reporters as late as Monday.

“Every year I’ve been in this legislature we’ve had complete transparency about what’s in the bond package. If it is not there, then that’s for one reason and one reason only: he has been making promises to lure wary legislators.”

The governor, whose original proposal to toll cars and trucks bogged down last May, has been trying since late November to win support for tolling only large, commercial trucks. And Republican legislative leaders, who oppose tolls, already have voiced suspicions that Lamont may direct bonding to entice lawmakers on the fence about tolls to his side.

He told reporters last week that he’d reached a tentative agreement with legislative leaders on a two-year bond plan, to be voted upon at the same time as tolls.

But while there was talk of possible votes on the tolls proposal in December, January and even the first week of February, Democratic leaders in the House and Senate recently announced there would be no vote before Feb. 10 — five days after Lamont’s latest budget and bonding plans are due. 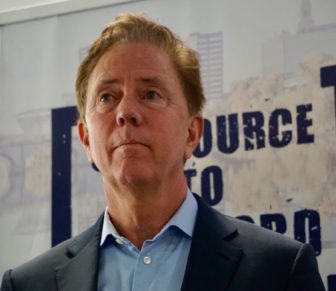 In even-numbered years, the governor is supposed to recommend any adjustments to the second year of the two-year budget and bonding plans when the regular legislative session convenes in February. But when he and lawmakers agreed last May on a new two-year state budget, they didn’t act on a complementary bonding plan. Because no bonding package was approved last spring, Lamont is expected to release proposals Wednesday both for the remainder of this fiscal year, and for 2020-21.

Lamont didn’t release many details in advance but said he had to compromise and agree to more borrowing than he wanted. But he also insisted that when details were released, it still would show progress on his “debt diet” program to scale back state borrowing compared with that of the past decade.

Chris McClure, spokesman for the governor’s budget office, wrote in a statement Tuesday that Wednesday’s bond presentation will reflect the tentative deal Lamont struck with leaders of the House and Senate’s Democratic majorities.

“The governor has been consistent and transparent about the need to make key, strategic investments in this state while simultaneously reducing our overall borrowing and associated borrowing costs,” McClure added. “The bond package compromise is in keeping with the governor’s priorities and will help fuel the growth in our economy that Connecticut needs.” 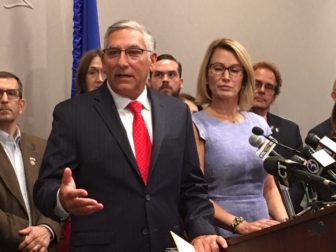 But McClure’s statement did not specify whether the presentation only will include gross levels of bonding proposed, or if it would include project-by-project detail as has been available in past years.

“There should be total transparency,” said Senate Minority Leader Len Fasano, R-North Haven. “This is a governor who said we need a debt diet, who ran on a debt diet, who went to Wall Street to talk to the credit rating agencies about our debt diet. He has to justify specifically what he wants to bond for.”

House Minority Leader Themis Klarides, R-Derby, said, “Every year I’ve been in this legislature we’ve had complete transparency about what’s in the bond package. If it is not there, then that’s for one reason and one reason only: he has been making promises to lure wary legislators.”

Max Reiss, the governor’s communications director, has accused Republican legislative leaders of “fear-mongering” when it comes to tolls. Reiss also noted that the only Republican alternative to Lamont’s tolls proposal involved draining two-thirds of the state’s emergency budget reserve, putting state programs at severe risk when the next recession occurs.