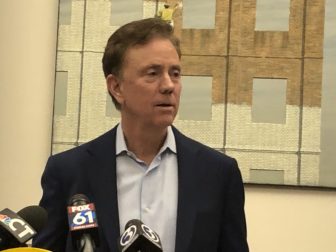 Gov. Ned Lamont announces a tentative deal on new bond package that clears the way for a vote on tolls.

Lamont announced a compromise deal on a new state bond package — a prerequisite for any tolls vote — that curtails borrowing for non-transportation projects, but not as sharply as the governor envisioned in the “debt diet” he unveiled last February.

Majority Democrats in the state Senate also released a first draft of the tolls bill and confirmed an informational hearing on the measure has been scheduled for Friday.

These conditions set the stage for a vote on tolls next week. And Lamont said he still expects lawmakers will act in special session on Monday or Tuesday next week, just before the regular 2020 session begins on Wednesday.

“We’ve got a good bond package,” the governor said. “We’ve reached agreement on where we’re going to go there.”

Lamont didn’t release all the details of the two-year bond plan, but said the centerpiece is $1.7 billion in general obligation [G.O.] bonding for the current fiscal year.

“I thought we needed some discipline in terms of how much borrowing we do going forward,” Lamont said. “We’re going to be borrowing significantly less than they have, on average, over the last eight years.”

Details on bonding for the 2020-21 fiscal year were not released late Monday.

Lamont asked lawmakers last February to limit their new G.O. bonding to just over $1.4 billion this fiscal year, but many of his fellow Democrats in the legislature argued this was too lean.

Transportation construction is paid for with a mix of federal grants and a second type of state bonding, Special Tax Obligation bonds. These STO bonds are repaid with resources from the budget’s Special Transportation Fund. The STF primarily draws revenues from fuel taxes and a portion of the state sales tax.

Lamont insists tolls are needed because the transportation fund has not kept pace with the maintenance needs of Connecticut’s aging, overcrowded highways, bridges and rail lines.

As part of the tentative bond agreement, about $100 million of the $1.7 billion in G.O. bonding approved for this fiscal year will be dedicated to transportation work. 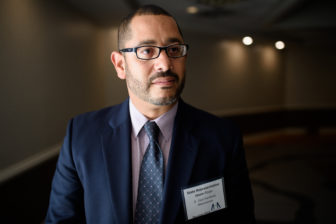 “It’s taken us a while to get here, and not from a lack of interest or a lack of effort,” Rojas said.

The East Hartford lawmaker did not disclose full details of the tentative agreement but confirmed the $1.7 billion general obligation bonding target for this fiscal year.

Rojas also praised Lamont for being flexible, adding that some of the  borrowing the governor allowed beyond his original proposal would enable crucial affordable housing programs to proceed.

Lamont has been at odds with Democrats over borrowing since he took office in January.

Connecticut’s bonded indebtedness per capita exceeds that of most other states, while payments on bonded debt consume 12% of this fiscal year’s General Fund. Supporters of the heavy borrowing of the Malloy administration argue that Connecticut — despite its great wealth — still has many poor communities and this financing advanced top priorities in education, health care and economic development that otherwise would have languished.

The governor would not sign off on a new bonding plan until legislators either adopted a tolls proposal, or otherwise showed how they planned to pay for necessary transportation upgrades in the coming years.

Many legislators who supported tolls countered by saying they would not vote for this new revenue source unless a bonding agreement had been reached.

The tentative deal also marks a big win for Connecticut’s cities and towns.

Three municipal aid programs, which distributed $150 million to communities last fiscal year, have hung in limbo as Lamont and legislators sparred over borrowing. Sources say these grants, including a crucial $60 million local road maintenance program that also pays for winter snow removal, are funded in each year of the tentative, two-year bond package.

Details of the tolls bill

The bill calls for tolls to be placed on large, commercial trucks with a rating of Class 8 or higher. This would exempt many Connecticut small businesses from paying the toll.

The bill authorizes the Transportation and Motor Vehicles departments to hire a toll operator. The DOT commissioner may establish rates provided they fall within a range of $6 to $13 per gantry. E-ZPass holders would be eligible for a discount.

Lamont estimates this would generate about $180 million per year in revenue for the budget’s Special Transportation Fund.

Toll rates could be increased by the DOT to reflect the general rate of inflation or the construction cost index, provided those increases are approved by the state’s Transportation Policy Council.

The bill also contains two provisions to guard against any effort by future legislatures to order tolls on smaller trucks or cars.

Until any bonds issued through mid-2022 for transportation projects are paid off — which likely would take into the late 2040s or early 2050s — “the state of Connecticut shall not charge tolls for any class of vehicle other than large commercial trucks,” the bill reads.

The measure also directs the state treasurer to write into the bond covenant — the contract between the state and the investors that purchase Connecticut’s transportation bonds — “that no public or special act of the General Assembly” approved between now and 2030 would attempt to alter this arrangement.

The bill orders 12 toll gantries, chiefly at the locations of aging bridges. All of these locations were identified months ago by the Lamont administration as priorities, primarily because they involve aging bridges.