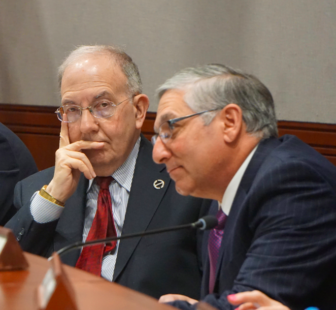 Faced with the threat of a 30-hour debate by the Republican minority and a less-than-certain game plan by the Democratic majority, lawmakers have put off tentative plans for a Thursday vote on tolls legislation until at least next week, the top Senate leader said Tuesday night.

Both House and Senate Democrats remain unwilling to go first in debating the bill that would authorize truck tolls on a dozen highway bridges — an extraordinary acknowledgement of the continued distrust by members of each chamber that the other has the votes for passage.

Senate President Pro Tem Martin M. Looney, D-New Haven, said the latest scenario for attempting passage is to split the bill in two, each authorizing tolls on six bridges — one bill beginning  in the House and the other in the Senate. The bills would be exchanged by each chamber like hostages.

“Both chambers would have to pass both bills,” Looney said.

The Republican minority leaders, Sen. Len Fasano of North Haven and Rep. Themis Klarides of Derby, said the machinations by the Democratic majority are an affront to the General Assembly.

“I thought last week’s flimflam was bad,” Klarides said, referring an earlier plan to attempt synchronized votes and debates of identical bills. “It was a miscarriage of the process. But this one is just beyond.”

Fasano said Republicans not only will debate the bills at length, but withhold typical courtesies that lubricate the machinery of legislating — such as waiving a reading the bill.

Looney said the promise of a 30-hour filibuster will require preparation by both chambers. Senate Democrats will caucus on Thursday to talk about what may come next.

“We have to figure out a time next week to set aside 30 hours, if need be,” Looney said.

“The House will be begging for a 30-hour vote by the time this debate is said and done,” Klarides said.

Democrats control the Senate, 22-14, and the House, 91-60. Looney has told the governor he can produce 18 votes, enough for passage with the help of a tie-breaking vote by Lt. Gov. Susan Bysiewicz.

Republicans said Democrats have no grounds to accuse the GOP of dilatory tactics, since they are turning the process on its head.

“If you are not going to respect the institution, don’t ask me for respect,” Fasano said.

House Speaker Joe Aresimowicz, D-Berlin, could not be reached Tuesday.

The governor’s office declined to comment beyond Gov. Ned Lamont’s statement earlier Tuesday that his last communication with the leadership left him under the impression the vote would be Thursday.

Lamont and Looney spoke on Saturday.

The debate over tolls has turned into a saga.

A year ago, Lamont proposed a comprehensive system of tolls on cars and trucks at more than 50 locations on Interstates 84, 91 and 94, as well as the Merritt and Wilbur Cross parkways. It would have raised as much as $800 million annually.

When lawmakers refused to bring the measure to a vote, the administration countered with a downsized version of tolls on cars and trucks on 13 bridges. Legislative leaders could not find the votes for passage.

“We had assumed the House would go first when we compromised. The compromise was offered by the House,” Looney said. “They declined to go first.”

The current plan is getting squeezed from both sides. Every Republican in the General Assembly promises to vote against any form of tolls — or new transportation revenue, for that matter. Some supporters of Lamont’s ambitions for a plan to spend more than $19 billion on transportation over 10 years grumble that the compromise raises too little money.

The proposal calls for a three-stage distribution plan, but complex logistics remain unresolved.

Rosa DeLauro steps up fundraising as campaign heats up

DeLauro raised more than $405,000 for her re-election campaign, a substantial boost over previous fundraising.

The PAC is reminder that Themis Klarides is staying active and keeping options open for 2022.

It was the first salvo to reform electric market rules and ISO New England, operator of the grid.

CT ViewpointsCT Artpoints
Opinion Amy Coney Barrett: The real reason she seems to ‘have it all’

Far too much coverage of Judge Amy Coney Barrett’s confirmation hearings has focused on her role as a mother of seven. Republican and Democratic senators alike have admired her “beautiful” and “well-behaved” children. In apparent awe, they have queried, “How do you do it?” In response to Sen. Dianne Feinstein (D-CA), Coney Barrett relied on a familiar deflection: “I have eyes in the back of my head.”

How should educators teach the election of 2020? No doubt it’s essential. Pulitzer-winning historians Eric Foner, Jon Meacham, and Doris Kearns-Goodwin have gone on record saying that this Presidential contest is epochal, that the outcome may well be challenged in historically important ways, that it rates as a high-stakes “crisis election.” The recent presidential debate put students on notice that the contest will be bruising; they’re fascinated — as they might be watching a car wreck on YouTube. They want to talk about it.

Opinion As teen driver fatalities rise, parents and others must take notice

National Teen Driver Safety Week runs this week, October 18–24 and Connecticut, which has some of the toughest laws in the country, saw last year the highest number of 16- and 17-year-old drivers killed in crashes since the laws were passed 12 years ago.

Opinion Questions about Dr. Conley’s conduct, not his medical degree

I have no issue whether Commander Sean Conley, DO., USN has an MD or DO as his medical discipline and healing tradition. But I have serious concerns about his conduct that is publicly discernable and the misleading statements about when and what tests were used for President Trump and what the results are of the tests for COVID-19 and its impact on the lungs and other vital tissues.