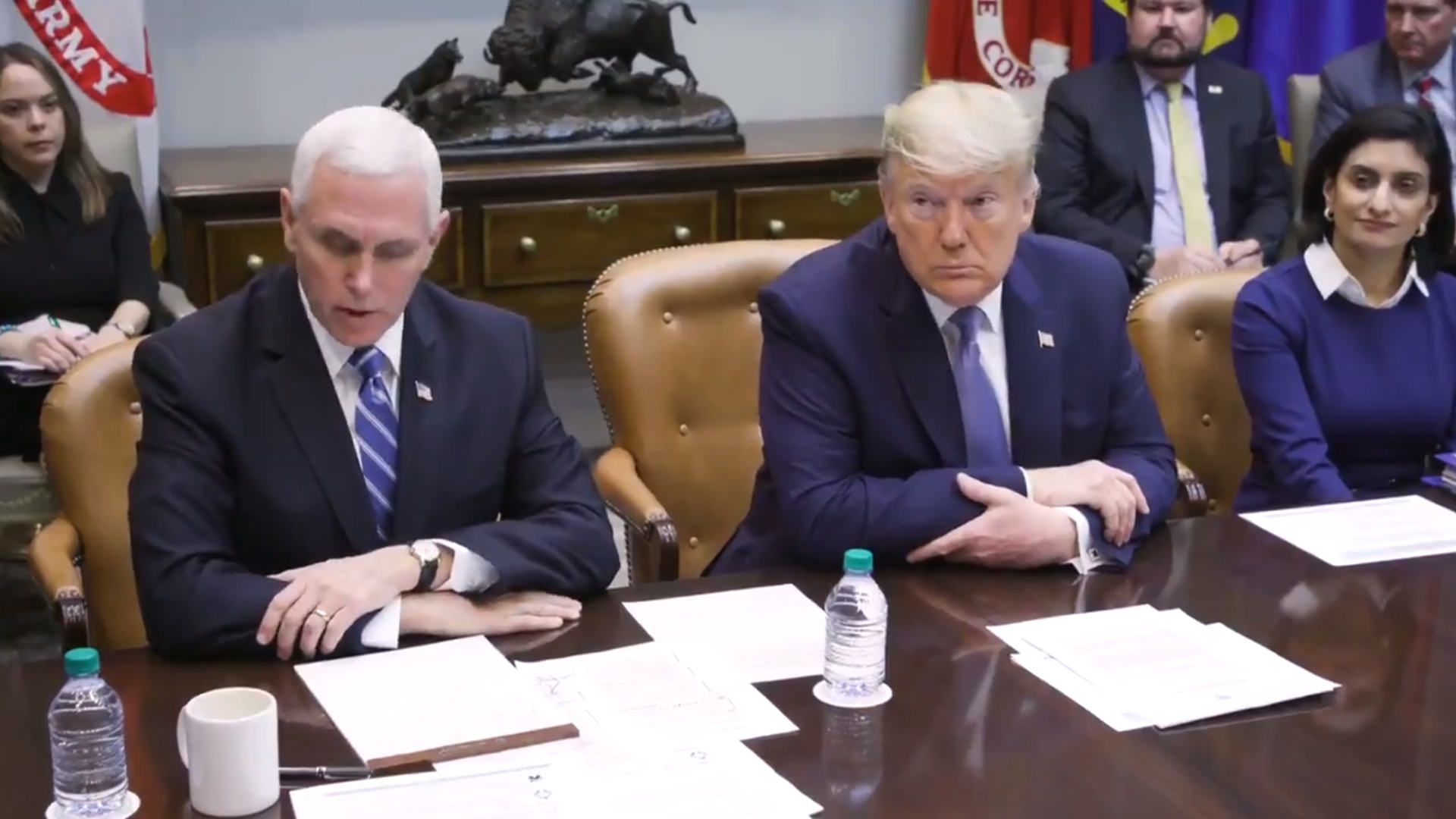 President Donald Trump and Vice President Mike Pence and other administration health officials met with the nation’s largest health insurers on  coronavirus testing and other medical bills related to COVID-19.

Washington – At a White House meeting on Tuesday, executives from the nation’s major health insurers committed to picking up the tab for coronavirus testing, which is expected to increase dramatically as commercial labs come online.

“All the insurance companies here, either today, or before today, have agreed to waive all copays on coronavirus testing, and extend coverage for coronavirus treatment in all of their benefit plans,” said Vice President Mike Pence.

Up to now, most of the testing for coronavirus has been done in public labs free of charge, and the Centers for Disease Control and Prevention said on Tuesday that nearly 4,900 tests had been completed. But commercial labs charge a fee for their services.

The vice president, who is in charge of coordinating the federal response to the COVID-19 crisis, was sitting next to President Donald Trump in the meeting with executives including those from UnitedHealth Group, Anthem, Cigna, Humana, AetnaCVS and the Blue Cross/Blue Shield Association.

Most of these large health insurers had already announced they were waiving copays and providing free benefits related to coronavirus. Pence’s announcement appeared to cover a larger group.

“No one should hesitate to see their doctor to get tested and treated for COVID-19 because of costs,” said Matt Eyles, president America’s Health Insurance Plans, who attended the White House meeting. “Health insurance providers across the country have taken action to remove cost barriers to care. ”

The federal government has no authority over insurers; regulation of that industry is largely left up to states.

But state authority over the insurers varies. While California, New York, Vermont, Colorado and Maryland have ordered insurers to cover the costs of coronavirus testing, Connecticut does not give that authority to the governor, leaving the state dependent on insurers’ goodwill.

Most insurers domiciled in Connecticut – Cigna, AetnaCVS, Anthem Blue Cross/Blue Shield Connecticut, ConnectiCare, Harvard Pilgrim and UnitedHeath Group – had already announced they were picking up the tab for coronavirus testing.

Lamont also said he would use his authority to give pharmacists the discretion to fill 90-day refills of prescription drugs under certain circumstances, even if the original prescription was for a lesser amount.

“We are doing everything in our capacity to put adequate plans in place for anyone who is impacted by this situation, and I thank each of Connecticut’s insurance carriers and our state’s pharmacists for working with our administration to make this possible,” Lamont said.

Meanwhile, at the White House on Tuesday, Pence said the nation’s top insurers have also agreed to cover telemedicine to allow people to speak to their doctors remotely about the coronavirus, though specific details on the agreements were not immediately available.

He also said they had agreed to “no surprise billing,” which is when a patient gets hit with an out-of-network fee without being informed in the moment that the services they were receiving weren’t covered.

Pence did not mention the millions of uninsured Americans and those covered under by their employers under self-insured plans. Large companies often self-insure, paying claims out of their own funds and determining benefits. They contract with an insurer to manage the plan, but those insurers can’t alter any benefits without the self-insured company’s approval.

Nationally, about 100 million Americans receive their coverage through self-insured employers — more than 60% of all those covered by employer plans.

“I’m encouraging all employers to follow the lead of the health insurance industry in affirming that their plans will be covering coronavirus testing with no out-of-pocket costs,” said Ted Doolittle, Connecticut’s Healthcare Advocate.