As Lamont prepares to ease COVID restrictions, he will also explain how they could return 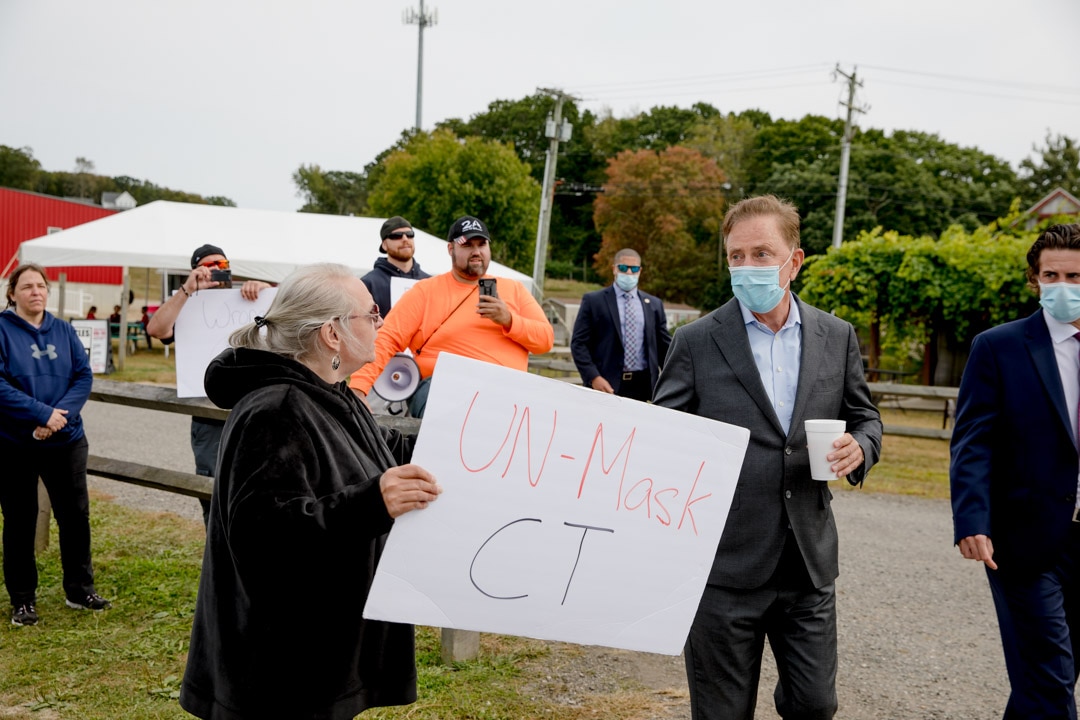 Gov. Ned Lamont is confronted by Melanie MacDonald, left, of New Britain, on Tuesday during a visit to Holmberg Orchards in Gales Ferry. MacDonald was protesting Lamont’s executive orders related to the coronavirus pandemic.

Gov. Ned Lamont is expected Thursday to ease pandemic restrictions further on business and other activities, despite modestly rising infection rates and an imminent flu season.

But to advance Connecticut’s reopening in this climate, administration officials say, they have to be ready to show what it will take to reverse course — and quickly.

The problem, though, is that sifting through COVID-19 metrics is far from an exact science. The challenge, they say is to find the indicators that will head off problems, protect lives, not shackle the economy needlessly, and — hopefully — make sense to the public.

“At the end of the day, the governor has been consistent,” said Josh Geballe, Lamont’s chief operating officer. “We are leading with public health.”

Administration officials declined to say which restrictions might be eased Thursday. The options include raising occupancy limits in restaurants and stores and reducing space requirements between seats in restaurants and theaters, among others. Lamont could also allow bars to reopen, but he expressed strong opposition to that during the summer.

But when it comes to identifying which health statistic could trigger an end to dine-in service at restaurants, or in-classroom instruction in schools, Geballe said, the question isn’t that simple.

“We slice and dice the data, looking at it by age groups, high-risk communities and other factors,” Geballe added “but it’s just not all about metrics. We also take in a lot of feedback, from public health and medical experts, researchers” and stakeholders in business and government.

Still, if there’s a backbone to any potential Lamont methodology for rolling back Connecticut’s reopening, it lies with infection rates.

Not long after the pandemic struck in March, the governor frequently discussed the importance of the seven-day average infection rates. State health officials compile daily test results, dividing total positive infections by all tests completed that day. They then find the average of that day’s results and those of the previous six.

Connecticut’s seven-day-average infection rate for much of the summer was below 1%.

After an August outbreak in Danbury and smaller surges in the vicinity of a Norwich nursing home and Central Connecticut State University, it popped above 1% in September but has remained below 1.5%. It stood at 1.2% through Wednesday.

By comparison, much of the Midwest, Rocky Mountain region and Deep South have been above 10% for months. Lamont has ordered visitors from these states to quarantine for two weeks.

But while that’s a sound trigger for travel restrictions, Lamont said during a briefing Monday, when it comes to other activities “the 10% infection rate is a big number. … I think that’s too high.”

The governor added he would be more focused on “something half of that,” especially if it was accompanied by a clear trend.

In other words, if the seven-day infection rate exceeded 5%, and had been part of an escalating trend, it might be time to increase restrictions.

Department of Public Health Commissioner Deidre Gifford noted the 5% mark is a key indicator for caution with the World Health Organization.

“It’s concerning when we start to see it go up when we’re still doing plenty of testing,” Gifford said during Monday’s briefing. Connecticut consistently has been completing more than 10,000 tests per day.

But Geballe said it’s not as simple as saying a 5% infection rate automatically changes everything about schools, businesses and other key aspects of life in Connecticut.

Hospital admissions, which have been down for months, need to remain low.

Climbing rates among the elderly, or in high-risk communities like nursing homes and prisons, also are caution flags, he said.

Johns Hopkins University published a series of coronavirus management metrics for cities in June that emphasized assessments not only of infection rates, but of the health care industry’s capacity to respond quickly to negative trends.

The availability of intensive care unit space and ventilators is crucial during a crisis, but equally important are infections among health care workers and supplies of protective gear.

Johns Hopkins researchers also recommend communities develop some assessment of public compliance with safety measures, specifically the use of masks.

Lamont last week announced a series of fines ranging from $100 to $500 for residents who violate the mask mandate in public areas. But the governor didn’t cite any statistical evidence for the new penalties, simply indicating a concern about growing infection rates.

A COVID spike in a nursing home population could be indicative of a problem in the facility, but it also could be a sign of a surge in coronavirus infections in the greater community of which health officials aren’t aware.

“Our members don’t live in the nursing homes,” Martin said. “In the end they’re part of the community.”

But Geballe said the union’s assertion is wrong and that the administration regularly analyzes and publishes data on coronavirus cases among residents and staff at nursing homes and assisted living facilities. “It is among the most closely watched information that we collect each week.”

“We were having a lot more conversations with the state in the spring than we are now,” said Connecticut Business and Industry Association President and CEO Chris DiPentima. “Businesses are more engaged than ever to give their feedback.”

And that feedback, unfortunately, is that many businesses, especially restaurants, hotels and others in the hospitality field, won’t make it until next spring without some form of relief, be it government assistance or an easing of restrictions, he said.

With a state unemployment rate that’s effectively 15%, business restrictions can’t be considered this fall or winter without a full analysis of the pandemic’s economic damage to Connecticut.

“I don’t think we even know the magnitude of it,” he said.

But Geballe said the Lamont administration is weighing all aspects of the pandemic.

The governor announced efforts Wednesday to expand a state anti-layoff program that already is preventing more than 23,400 workers from receiving pink slips.

And even when health care policy objectives are being established, Geballe added, they aren’t driven solely by statistical analysis.

State health officials interact frequently with the Centers for Disease Control and Prevention and other federal agencies, as well as governors in other New England and Mid-Atlantic states.

And those intergovernmental conversations aren’t just about coordinating actions, Geballe said, but also to share knowledge and — frankly — learn from each others’ mistakes.

Lamont suspended plans in late June to reopen bars in July, despite declining infection rates here, because COVID-19 cases had spiked in too many other states that had opened bars.

Their advice, Geballe said, carries as much weight as any health care metric.

“You bring that all together, at the end of the day, there is no mathematical formula for these decisions,” Geballe said. “It’s a constant balancing act. There is no playbook for this.”