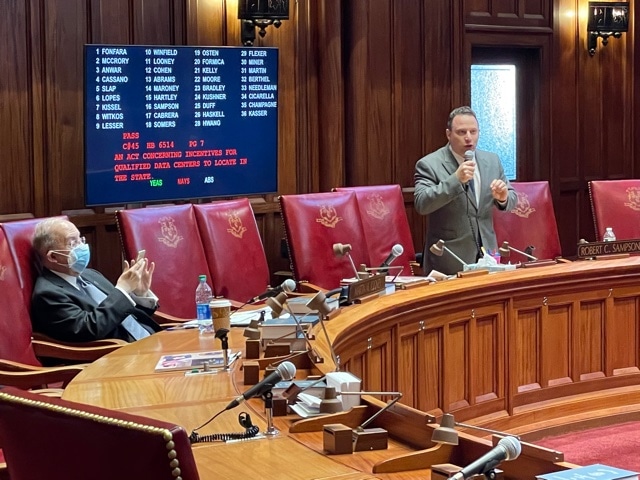 The Senate overwhelmingly gave final approval Monday to the data center incentives measure, as well as a second bill that pledges roughly $110 million to $120 million in new general government aid to cities and towns — but doesn’t commit the funds right now.

Both bills cleared the House of Representatives last week and now head to Lamont, who is expected to sign both.

“There’s a recognition that with the new industry, particularly the data center industry, we need to have some environmental considerations in place,” said Sen. Christine Cohen, D-Guilford, who co-chairs the legislature’s Environment Committee.

Originally expected to approve the data center measure last Thursday, the Democrat-controlled Senate deferred action over concerns about how the program could affect air quality in future years.

Negotiations between the Senate Democratic caucus and the Lamont administration over the past few days concluded with the bill moving forward, along with a pledge from the governor to support new environmental standards that the legislature would adopt this spring, Cohen said.

The Senate passed the incentives bill Monday by a 29-5 margin.

Electricity generation, along with transportation, is one of the leading sources of greenhouse gas emissions. And Cohen said data centers usually rely heavily on diesel generators as a secondary power source after buying electricity from the regional grid.

The legislation still is being developed, but Cohen said she anticipates a limit that mirrors federal Environmental Protection Agency Standards for data centers’ diesel-related emissions involving emergency generation during power outages. And when diesel-powered generators are used for brief periods to level out peaks in energy usage, the limit would be even stricter than federal EPA standards.

Cohen added that this environmental legislation, which will be adopted this spring, is vital given the potential for the incentives to significantly expand data center development in Connecticut.

The incentive plan the Senate approved Monday would waive state sales tax obligations for 20 years for any data center that invests at least $200 million in the state — or just $50 million if the facility is located within a state-designated enterprise zone.

Connecticut also would waive its right to impose a financial transactions tax, such as those proposed last summer by New York and New Jersey on these facilities.

Most states, including Connecticut, impose a sales tax that applies to online shopping. But some states have considered a separate, second levy that would apply to a broad range of online transactions, including purchases and stock transactions.

David Lehman, Lamont’s commissioner of economic and community development, said last week that the administration has been in serious talks with operators of data centers for months, and the exchanges were looking for assurance that a transaction tax was off the table.

Sen. Norm Needleman, D-Essex, who co-chairs the Energy and Technology Committee, was one of several who argued that the incentives could give Connecticut a foothold on one of the fastest-growing segments of the 21st-century economy.

“This is the bill for our future,” Needleman said, adding that data center development could someday rank alongside technological advancements like the telephone exchange and the portable typewriter. “It is saying to the tech world: ‘Welcome. We want you here.’”

The bill also empowers the municipalities where these data centers would be located to negotiate “host fee agreements.”

While the centers, technically, would be exempt from municipal property taxation, communities could impose a host fee that could be less than, equal to or greater than the lost taxes.

Still, some critics charged that Connecticut wasn’t getting much of a return.

Sen. Alex Kasser, D-Greenwich, one of five who opposed the incentives, said data centers create construction jobs for a year or two but then employ minimal staff to maintain the facility.

“Thirty years is a long time to give an industry a free pass on taxes” in exchange for “a skeletal staff.”

And Sen. Cathy Osten, D-Sprague, who voted for the measure, used her comments to chastise the Lamont administration for finding the time to prioritize data centers — but not Connecticut’s relationship with the two Native American tribes that run casino complexes in the state’s southeastern corner.

“I am extremely offended,” Osten said, noting the Mashantucket Pequot and Mohegan tribes have been hoping to reach a deal with the state regarding online gaming issues since Lamont took office in January 2019. “They’ve never asked for a dime from the state of Connecticut, yet we can’t in two-and-a-half years come up with an agreement?”

Max Reiss, Lamont’s communications director, said afterward only that “negotiations between members of the governor’s administration and the tribes are ongoing.”

Also Monday, the Senate endorsed an omnibus fiscal bill that lays the groundwork for a major boost in non-education aid for communities with large quantities of tax-exempt property.

“This is a commitment to greater equity in this [budget] process,” Senate President Pro Tem Martin M. Looney, D-New Haven, said a few minutes before the Senate passed the fiscal bill 28-7.

The measure specifically creates a new methodology for funding the state’s PILOT, or Payment In Lieu Of Taxes, grants, which reimburse communities for a portion of the revenues they lose because certain types of property are tax-exempt.

Legislatures and governors have struggled to maintain their commitment to PILOT over the past two decades as surging pension and other debt costs have consumed more and more of the state budget.

PILOT grants are supposed to replace about 45% of the funds communities lose because they can’t tax state property. Communities currently get less than 15% back, according to the Connecticut Conference of Municipalities. Similarly, the grants once designed to replace 77% of taxes lost on nonprofit colleges and hospitals now cover less than 25%.

No community would receive less PILOT aid than it currently does through the bill under consideration, but those in low-income municipalities would receive additional funds.

Democratic leaders estimate this new system would cost the state about $110 million to $120 million per year, but the bill adopted Monday doesn’t actually appropriate the funds — leaving that crucial step to late spring when the next two-year state budget is expected to be approved.

“We’re passing a policy without funding? Wow!” said Senate Minority Leader Kevin Kelly, R-Stratford, who voted against the bill and suggested it was more about politics than about substantive relief. “We need to be more mindful of the middle class.”

Advocates for cities and towns last week thanked lawmakers for the pledge legislation, but also warned that municipal budgets would be left in a lurch this spring if the aid isn’t delivered.

The first would clarify that more than 100,000 Connecticut residents who work in other states and pay income taxes to those jurisdictions still can get a credit for those taxes on their Connecticut returns.

New York and Massachusetts enacted laws holding that telecommuters working from home for “convenience” actually owed taxes first to their employers’ home state. Connecticut responded with its own convenience law in 2019, and those and other northeastern states are battling the issue out in federal court.

The second additional component wrapped into the municipal grant bill would end the controversial practice of placing liens on the homes of former welfare recipients.