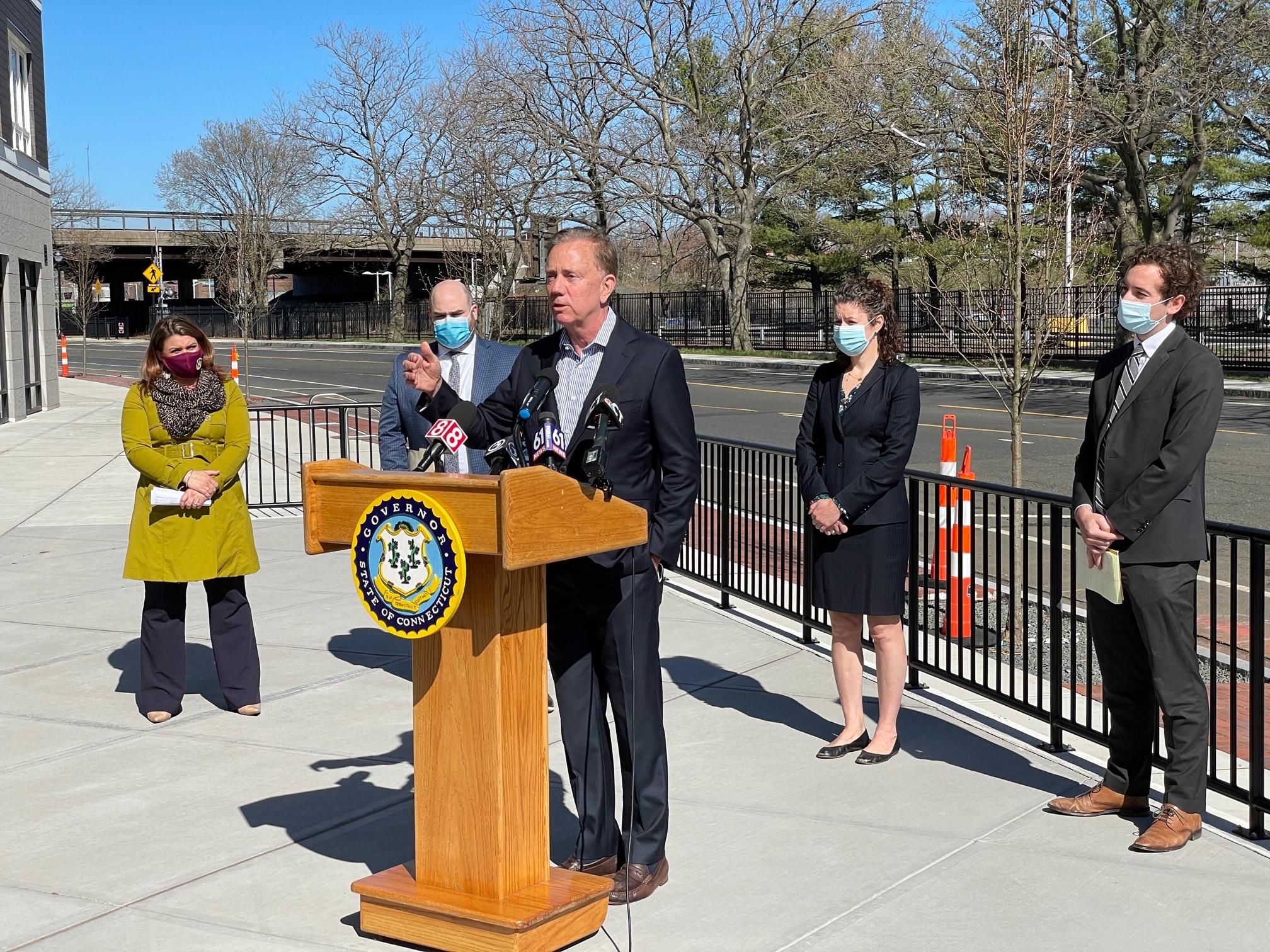 NEW BRITAIN — Gov. Ned Lamont was warmly greeted by Mayor Erin Stewart, the Republican who recently announced she would not challenge Lamont for governor in 2021. On Tuesday, they had common cause — if only to a point.

Stewart agreed to appear outside a gleaming new apartment building constructed on a city lot that she says was unmarketable until the construction across the street of CTfastrak, the busway much maligned in GOP circles.

The Republican mayor and Democratic governor each are boosters of transit-oriented development, a popular and politically safe approach to creating cities that are less reliant on gasoline-powered vehicles, the largest single source of greenhouse gases in Connecticut.

But Lamont has gone a giant step further by signing onto a regional Transportation and Climate Initiative as a way to reduce greenhouse gases and raise money for transit — a concept bitterly opposed by many leaders of Stewart’s GOP.

In promoting TCI, as the initiative is known, the Lamont administration is working to succeed where it failed horribly two years ago in seeking support for highway tolls as a means to modernize Connecticut’s creaky infrastructure.

And that brought him and Stewart to Columbus Commons, a new 80-unit apartment complex constructed on the site of the old police station, the first phase of a mixed-use development on Columbus Boulevard, across from the terminal of CTfastrak.

“It is the first ground up development that we saw in this city in decades — brand new, brand new housing, all because of the access to mass transit because of CTfastrak,” Stewart said.

Lamont, who announced his administration planned to use $3 million in pandemic relief to offer free weekend passage on CTfastrak and other transit buses over the summer, said he was trying to make transit-oriented development less abstract — and something worth funding.

Stewart kept her distance from TCI, which is opposed by the leaders of the House and Senate Republican minorities in the General Assembly.

“I’m here to talk about the benefits of transit-oriented development has had in the community. And that’s what I spoke about today. But I’m not a member of the legislature. That’s up to these guys to get it passed.”

Those guys included Lamont, two top environmental and transportation advisers, and Sen. Will Haskell, D-Westport. Haskell is a supporter of TCI and the co-chair of the Transportation Committee. 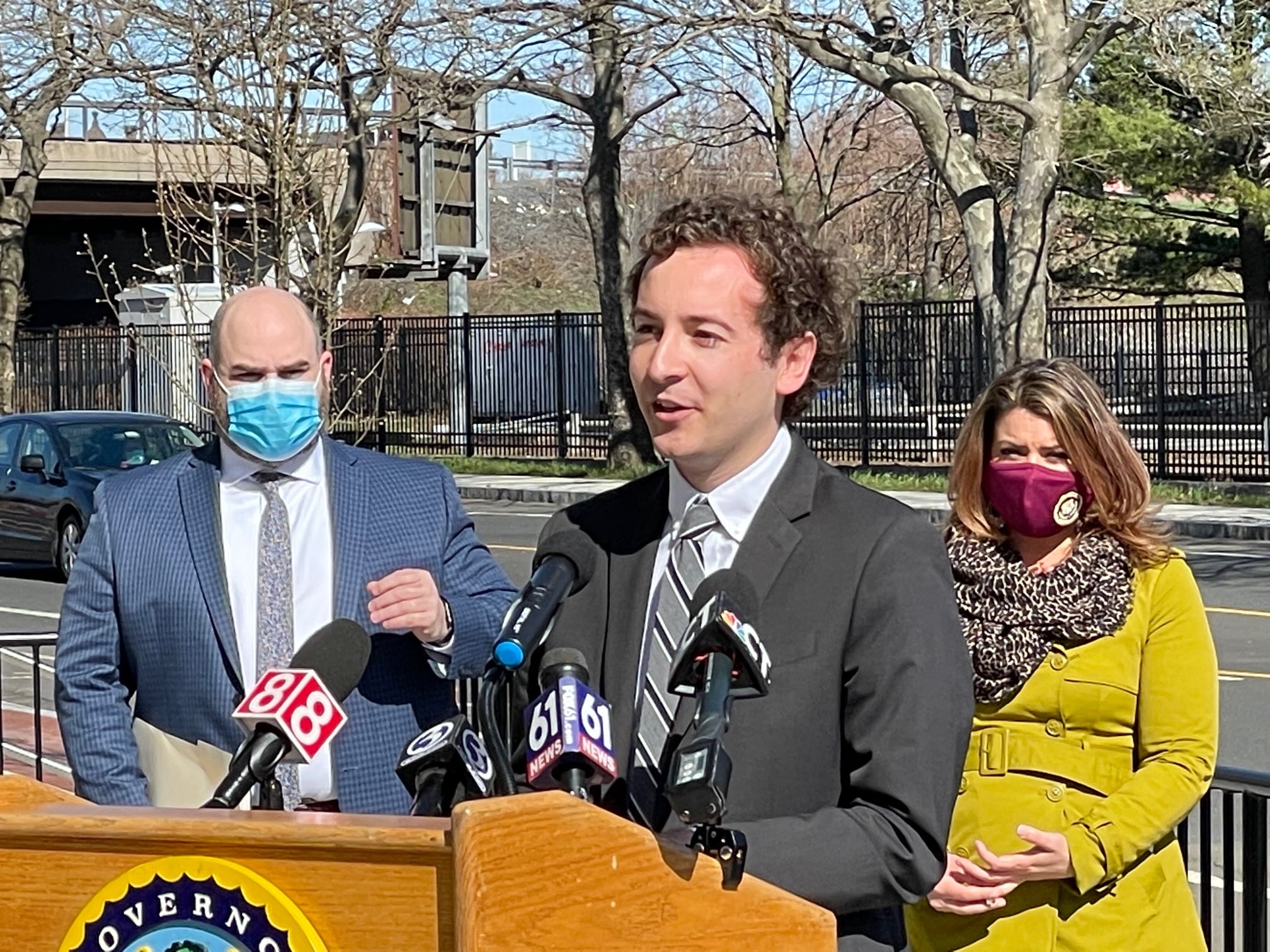 Sen. Will Haskell, 24, made a generational appeal for TCI. Mayor Erin Stewart, 33, right, supports transit-oriented development, but is not backing Haskell on TCI.

“But really I’m here today to speak to you as the youngest member of the General Assembly,” Haskell said.

Even if the 33-year-old Stewart was not ready to sign on, the Lamont administration is trying to sell TCI to the General Assembly as crucial to the next generation, though there has been no youth groundswell comparable to the social justice movement arising from the the death of George Floyd and the rise of Black Lives Matter.

Haskell, 24, who unseated a long-serving Republican incumbent in 2018, was a featured speaker at a recent youth climate summit organized by Katie Dykes, the commissioner of energy and environmental protection.

TCI is a cap-and-invest program and will bring revenue into the state – an estimated $89 million in 2023, increasing to as much as $117 million in 2032. Connecticut, Rhode Island and Massachusetts, the three states responsible for 73% of transportation emissions in New England, have signed a memorandum of understanding committing to the initiative.

Legislation is necessary to go forward, and the legislature’s Environment Committee is expected to vote on the plan Wednesday. It is opposed by the trucking industry and fuel marketers as an added cost to businesses and consumers.

It has broad support among environmentalists, though the Sierra Club and others are pressing lawmakers to gear the plan to environmental justice, ways to ameliorate the impact of pollution on poorer urban communities.

Dykes and Lamont said Tuesday that TCI could help the state leverage the federal transportation infrastructure funds that the Biden administration is promising.

“We’re going to be able to do projects like this to attract investment in transit-oriented development that helps limit the amount of time that people have to spend in their cars on commutes and getting around to the services that they want,” Dykes said. “And these types of projects, what we’re doing with the transportation climate initiative program, is going to position Connecticut to be at the front of the line for federal dollars that are going to become available from the Biden administration.”

Lamont said the federal share of those projects is expected to be 80% or 90%, but a state match still will be required.

“We got to put up our share out of a recurring revenue stream. And that could be Transportation Climate Initiative,” he said.

In public-hearing testimony this month, House Minority Leader Vincent J. Candelora, R-North Branford, opposed the initiative as an added cost, but he also said it appeared that once created, TCI’s costs would have no legislative oversight.

“Considering that the average American is struggling to stay afloat due to the economic effects of the COVID-19 pandemic, now is not the proper time to be pursuing this policy,” Candelora told the committee.

On Tuesday, Kelly said Republicans could achieve the same goals without any added costs.

“The reality for Connecticut middle-class families is that purchasing gasoline and food is still a necessity and increasing taxes on both is extremely regressive,” Kelly said. “It’s also misleading to suggest that the TCI gas tax will lead to cleaner air in Connecticut as states to our west are not moving forward with their own clean air reforms.”