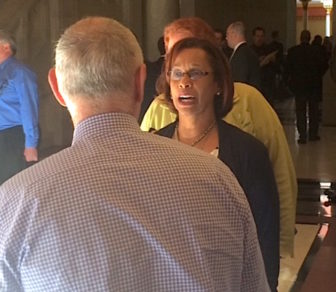 Rep. Toni Walker talks to Mark Ojakian, the governor’s chief of staff, on the way into recent budget talks.

Struggling to close a budget deal, legislative leaders and members of Gov. Dannel P. Malloy’s administration have spent much of the past two days engaged in a balancing act that’s one part finances, one part politics.

Still needing a relatively small amount of revenue — tens of millions of dollars in a two-year budget of more than $40 billion — negotiators have struggled to find acceptable sources that will yield dollars without costing votes.

And sources familiar with the process say one option examined closely over the past two days involves raising once again what traditionally has been among the politically safest taxes, the one on cigarettes.

If so, legislators would be boosting Connecticut’s cigarette tax for a fourth time in eight years. A budget deal hadn’t been sealed by mid-morning Saturday.

Meanwhile, legislative leaders conceded Friday that any chance of voting on the budget in the House and Senate on Saturday had slipped away, and the new target is Monday. The regular 2015 session adjourns at midnight Wednesday.

Getting a budget is challenging, especially challenging this year as the Democrats adjust to smaller majorities after losing seats in both chambers.

Democrats control 87 out of 151 seats in the House, where 76 votes is the magic number for passage. With Republicans expected to vote in unison against the budget, that means Democrats can’t afford to lose more than 11 of their own and still enact a package.

In the Senate, the Democrats hold a 21-15 edge. An 18-18 tie is not a problem since Lt. Gov. Nancy Wyman, who also is Senate president, could cast a tie-breaking vote in favor of any budget that the Malloy administration had negotiated. But if just four Democratic senators were to oppose the deal, it probably would be defeated.

Republicans gained seats in the House and Senate during the past campaign, even though Malloy triumphed over Republican challenger Tom Foley for a second time. Both Foley and GOP legislative candidates hammered away at the huge budget deficits projected for the next two fiscal years.

Watching incumbents lose seldom encourages a vote for higher taxes, though legislators of both parties also have been shaken by the depth of service cuts that would be forced by Malloy’s bottom line.

And several have been grumbling since early May when the Finance, Revenue and Bonding Committee proposed a whopping $2.4 billion in new taxes over two years, affecting income, sales, corporation and other levies.

The state’s chief business lobby, the Connecticut Business and Industry Association, has been pressing this past week, warning Malloy and lawmakers that the level of tax hikes on the table could dramatically weaken the state’s economy.

But it’s not just hefty taxes that could discourage some Democrats from supporting the new budget.

Sources say the final deal will strip more than $100 million in funding away from the level of social services recommended by the Appropriations Committee.

And the governor may have rubbed salt in that wound for some Democrats this week when, legislators say, he insisted in negotiations with leaders that funding be preserved for one of his top priorities, new charter schools.

More than a dozen Democratic legislators have warned their respective House or Senate leaders over the past week that they may not back the next budget if charter school funding grows while resources for their neighborhood public schools are flat-funded or cut.

Those variables are tricky enough, but a new one was added Friday when negotiators looked at increasing the cigarette tax, which currently stands at $3.40 per pack.

Sources said among the potential increases discussed were adding 50 or 75 cents per pack, which would provide roughly $20 million to $30 million in new annual revenue.

A coalition of anti-tobacco groups, including the American Cancer Society, the American Heart Association, the American Lung Association and the Campaign for Tobacco-Free Kids, has been urging lawmakers this session to add $1.50 per pack, calling it a no-brainer for several reasons.

The coalition argued its research shows a hike of this size would prompt 16,000 adult smokers to quit and discourage about 13,000 Connecticut at-risk teens from trying smoking. And then there’s the $60 million in extra annual revenue this would yield.

The last Quinnipiac University poll on cigarette taxes, taken in March 2011, just before the last increase was enacted, found 72 percent of voters favored it, with just 26 percent opposed.

More than two-thirds of Democrats, Republicans and unaffiliated voters all backed the increase.

Quinnipiac polls in 2007 and 2002 found similar results, with 68 percent of voters backing an increase eight years ago and 71 percent doing so in 2002.

But cigarette taxes also have been criticized as a regressive levy. With higher concentrations of smokers in low-income households, tobacco taxes also are seen by some as particularly targeting the poor.

The average cost of a pack in Connecticut already tops $9.50. Could pushing that price to or beyond $10 represent one more potential last straw that might lead some Democrats to oppose the budget?

The coalition also insists that with greater state investments in cessation programs and other support services for smokers seeking to quit, Connecticut can make much greater progress improving the overall health of its population.

But there’s a fiscal side effect as well, Johnson noted. Households with even one person smoking a pack a day already spend close to $70 per week or almost $3,500 annually on the habit. Quitting also can provide significant additional savings for smokers and their families.

“We’re hopeful the legislature will do something,” he said. “It’s disappointing at times because we know what works and we know what we need to do.”