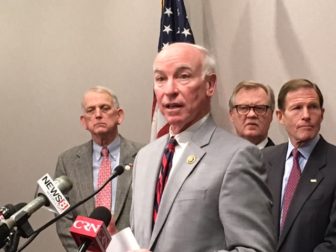 Washington – In the staredown between the Federal Railroad Administration and opponents of part of its plan in Connecticut to bring high-speed rail to the Northeast Corridor, the federal government has blinked.

It has agreed to consider additional input from those concerned about the route in Connecticut, and more importantly, the FRA is willing to modify that plan.

The NEC Future plan has been in the works for years. The FRA says it would reduce travel time between New York and Boston by 45 minutes and between Washington, D.C., and New York by 35 minutes and add tracks and railroad cars to a refurbished railroad system in the Northeast.

Other states have lauded the plan. But NEC Future has met heavy resistance from Connecticut, a pushback centered largely on a bypass of an existing rail line along the coastline that would run through Old Lyme and other historic coastal towns.

A final plan released in December proposes a new segment of track between Old Saybrook and the village of Kenyon in Richmond, R.I. The FRA is willing to dig a tunnel under Old Lyme to try to preserve the historic nature of the town, but that did not quell opposition.

The next step is the FRA’s release of its Record of Decision (ROD), expected no sooner than March 1.

“That ROD will identify a selected alternative that will encompass a package of investment projects to improve passenger rail service in the region served by the NEC over the next several decades,” said FRA spokesman Marc Willis.

The FRA spokesman also said “feedback” the agency has received – and continues to receive – since the final plan was released in December will be considered in drafting the Record of Decision.

“Meaning feedback we’ve received can reflect something different in the ROD than what is in the (final plan,) “ Willis said.

Meanwhile, Rebecca Reyes-Alicea, the NEC Future program manager, plans to travel to Connecticut Monday for a “private meeting with rail stakeholders.” The FRA would not disclose any other information about the meeting.

‘Crafted behind the scenes’

Bowing to pressure, the FRA extended past Jan. 31 the time period it allowed for reactions to the final NEC Future plan.

The FRA says each project along the eight-state route would require additional project-level planning work, including environmental analysis and engineering, before there’s construction.

It would cost at least $120 billion and take decades to complete.

The FRA says the NEC Future plan is only a proposal, and that state governments will make the final decisions on whether to accept it, alter it or ignore it.

Nevertheless, there’s been deep suspicion in Connecticut about how the FRA devised its plan.

Opposition in Connecticut has centered largely on the bypass, but there are concerns in Fairfield County and other areas of the state about what new tracks might do to property values in some neighborhoods, even as the laying of those tracks can be decades away and the FRA says their routes will be determined by state governments, not Washington, D.C.

“The recommendations in the NEC Future ROD, like other infrastructure projects in this country, will require significant funding and community partnership before any specific projects are advanced,” Willis said.

Besides upgrading the rail lines from New Haven, through Hartford, to Springfield,  NEC Future proposes a new two-track line from New Rochelle, N.Y., to Greens Farms in Westport. Those new tracks would deviate from parts of the existing route through Fairfield County, running parallel to I- 95, through Greenwich, Stamford, and Norwalk.

That upgrade would allow for more trains to operate between New York and Boston and for express trains to pass local or freight trains, the FRA said. But some local residents are worried that the new tracks will run through their neighborhoods.

State Sen. Paul Formica, whose district includes portions of New London, Old Lyme, and Old Saybrook, said the NEC Future plan was crafted “very much behind the scenes and not in the public eye.”

“The (FRA) has kind of pretended that this is the Wild West and you can just lay down tracks in open land,” Formica said.

As far as states having the final say over NEC Future, Formica is skeptical.

“It would just seem to me that if it’s up to the states to do it or not, they should have put forward a realistic plan,” he said. 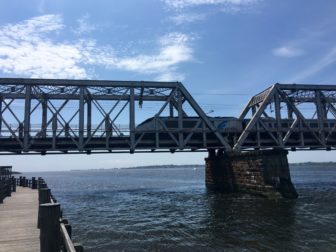 An Amtrak Acela train crosses over the Connecticut River into Old Lyme.

He’s sponsored legislation he hopes will curb the FRA’s authority to build the bypass. One is a resolution that would put the General Assembly on record as opposing the bypass. He also sponsored a bill that would require communities affected by NEC Future to approve it in a referendum before the plan moves forward. A third would require referendum approval from communities before state money is spent on NEC Future.

The resistance in Connecticut to NEC Future caught the FRA by surprise. More than a third of the public comments on the plan came from Old Lyme residents and their allies, including the Connecticut Trust for Historic Preservation and SECoast, its partner on high-speed rail issues.

The Connecticut Trust  for Historic Preservation plans to send the FRA a 60-page document next week that details its concerns.

“You cannot simply draw a line on a map of coastal Connecticut, a line representing billions of dollars of construction, development, and eminent domain, seventy-nine miles of proposed new rail corridor through communities uniquely dense with environmental and historic resources, without far-reaching consequences not easily undone,” a draft of the Connecticut Trust document says.

The document also said “without significant revision, the Federal Railroad Administration’s plans for Connecticut do not merely invite intervention through the courts, they nearly require it.”

Connecticut’s federal lawmakers strongly back opponents of the bypass. Now those from Rhode Island are concerned about the portion of the proposed bypass that would traverse their state.

The state’s Democratic senators, Jack Reed and Sheldon Whitehouse, and the state’s two members of the U.S. House of Representatives wrote the FRA about their concerns on Feb. 9.

“While we were pleased that NEC FUTURE features Rhode Island prominently in the Preferred Alternative, significant concerns have been raised about the impact that the representative route could have on conservation land, tribal land, family farms and neighborhoods in Washington (South) County in Rhode Island,” the lawmakers wrote.

They said, “We appreciate the FRA’s efforts to allow a greater airing of these concerns by extending the comment period and directly engaging with local community leaders.”

But, the Rhode Island lawmakers added, “If the FRA has the authority to remove the bypass as part of the alternative selected in the [Record of Decision] we would ask that you exercise that authority.”

The proposal for a new rail route through southeastern Connecticut. The Federal Railroad Administration says the route shown will not necessarily be the final route, which will be determined in the next phase of project planning.