Monday, thousands of undocumented youth, known as Dreamers, held their collective breath as President Donald Trump began rolling out his plan for a massive crackdown on illegal immigrants.

The young people could exhale Tuesday when they learned they are about the only immigrant group not potentially vulnerable to deportation.

That did not diminish the level of emotion on either side of the issue, however. U.S. Rep. Rosa DeLauro, D-3rd District, traveled all the way to San Juan, Texas, to condemn the Trump policy  as “inhumane” and “anti-American.” 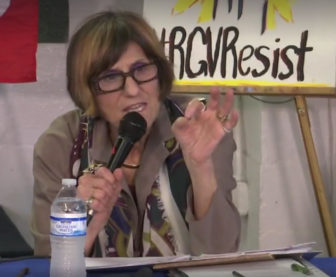 And while support appeared strong for the idea of deporting illegal immigrants who commit crimes, support for a wider roundup was favored by a majority only of Republicans. It was certainly not backed by Connecticut’s top public officials, among them Democratic Gov. Dannel P. Malloy.

He told the heads of the state’s law enforcement agencies – including college campus security forces – to refrain from enforcing federal immigration laws and to send any federal request to detain an undocumented immigrant up “the chain of command” for evaluation.

That action evoked an equally tough rebuke from the White House.

“It’s troubling that that’s the message he would send to his people and to other governors, because we are a nation of laws…” said White House Press Secretary Sean Spicer. “The idea that you can decide which laws to agree with or not to agree with, or to follow or not to follow, undermines our entire rule of law, and so I would suggest that is not a great sign to be sending to the people of Connecticut.”

While he was at it, Malloy dissed Trump’s rollback of federal guidelines protecting transgender students’ use of bathrooms corresponding to their chosen gender. The governor issued his own executive order assuring the transgender students they could use the bathroom of their choice. Then he was off to Washington, where he was scheduled to have lunch with the vice president and, today, to attend an evening event with Trump himself and the first lady.

The fear and discord stirred up by Trump’s immigration measures didn’t help his approval ratings, either. A Quinnipiac poll released Tuesday gave him the lowest ratings since he assumed office about a month ago, only 38 percent, but showed Americans still have confidence in his handling of the economy.

Trump’s interest in spending more money on defense was encouraging to the Connecticut-based makers of jet engines and helicopters, however.

Back in the state capital, debate continued on labor costs.

On Tuesday a legislative panel was split over whether to raise Connecticut’s minimum wage from the current $10.10 per hour to $11 next January and, by 2022, to $15. Meanwhile unions and their allies opposed proposals that would allow communities to cut worker wages on public construction projects. Malloy’s support of raising the thresholds for applying prevailing-wage rules put him in conflict with some of his fellow Democrats.

Farms and other farms 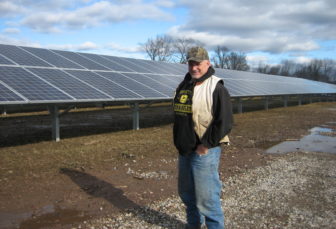 Kevin Sullivan in front of the solar array on his Suffield farm.

And there is still some concern among legislators as to whether Connecticut will be getting the best deal possible if it approves a satellite gaming facility in north central Connecticut – a site for which Foxwoods Resorts Casino and the Mohegan Sun say they will identify in a matter of days.

And, then there is the fundamental difference between legislators and the governor on the controversial issue of how to fund education in Connecticut. State Sen. Gayle Slossberg, D-Milford, co-chair of the Education Committee, and Benjamin Barnes, Malloy’s budget chief, revealed widely different views on how to go about it.

Not every development in Connecticut involves conflict or competition, however.

The Malloy administration’s effort on prison reform won praise – in particular the Department of Correction’s policy limiting the use of solitary confinement. Even more striking was the apparent coincidence of liberal and conservative interests when the governor unveiled his proposals for bail reform.

Additionally, there did not appear to be a big pushback against proposed legislation that would disclose the number of vaccinated children in public schools.

Neither does anyone seem to object to the announcement that Norwegian, a discount airline, is establishing limited transatlantic service from Bradley International Airport to Scotland.