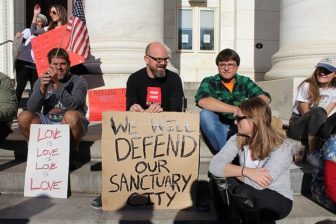 Demonstrators at a November rally in downtown New Haven.

Washington – The Trump administration’s crackdown on undocumented immigrants has ratcheted up fear in that community and prompted Gov. Dannel Malloy to issue guidance to the state’s schools and law enforcement agencies on how to handle the new directives from Washington.

“Putting all opinions about this presidential executive order aside, its enforcement is going to have a local impact, especially given the constrained resources and financial impact this will have on state and municipal budgets, which we already know are stretched to their limits, in addition to giving rise to serious concerns in affected communities,” Malloy said.

He told the heads of the state’s law enforcement agencies – including college campus security forces – to desist from enforcing federal immigration laws and to send any federal requests to detain an undocumented immigrant up “the chain of command” for evaluation.

The governor also urged Connecticut school administrators to have a plan in place in case a federal immigration officer comes to the school seeking information about a student and to consult with the school district’s attorney before taking any action.

The governor’s moves were hailed by immigrant activists in the state.

“Governor’s Malloy memo to police departments makes it clear – state and local law enforcement agencies are not required to enforce federal immigration law,” said Camila Bortolleto, of Connecticut Students for a Dream. “If local law enforcement agencies choose to enforce federal immigration law, it will undermine community safety. We will continue organizing to win sanctuary spaces and build deportation defense networks so that we can all live a life with dignity and a life without fear.”

The state’s immigration lawyers are also trying to give Connecticut’s immigrant community guidance on how to protect themselves from new Department of Homeland Security policy that broadens the categories of undocumented immigrants that would be at the top of the list for deportation. Immigration lawyers estimate there are about 80,000 undocumented migrants living in Connecticut.

“We’ve gotten a ton of calls from worried clients,” said Aleksandr Troyb, the chairman of the Connecticut chapter of the American Immigration Lawyers Association.

Two memos signed by DHS chief John Kelly that were leaked over the weekend and released Monday,  reverse former President Obama’s directives to narrow deportations to “hardened criminals,” those engaged in criminal gang activities and those who entered the United States no more than two weeks before and were detained within 100 miles of the U.S.-Mexico border.

After several years of breaking deportation records, a practice that angered immigration advocates, Obama in November of 2014 announced his administration would deport “felons, not families.”

That has now changed.

The Trump administration’s directives say immigrants who are in this country for two years or less are now subject to expedited removal. The directives also scrap the 100-mile limit, meaning those living anywhere in the country, including Connecticut, can be targeted for immediate deportation.

Troyb said he is urging all undocumented immigrants in Connecticut to carry proof that they have been living in the United States for more than two years.

“But there’s a practical problem,” he said. “The likelihood that an immigrant that is detained is able to prove that kind of presence here is extremely unlikely.”

Instead of solely targeting convicted felons for expedited removal from the United States, the new DHS directives said federal agents should prioritize those who  “have been charged with any criminal offence that has not been resolved,” that is, those accused of a crime who have not gone to trial to determine their guilt or innocence.

Also on the priorities list are those who “have committed acts which constitute a chargeable criminal offense; have engaged in fraud or willful misrepresentation in connection with any official matter before a governmental agency; have abused any program related to receipt of public benefits and … otherwise pose a risk to public safety or national security.”

“Anyone is open to being removed right now,” said Edwin Colon, an attorney at the Center for Children’s Advocacy.

Colon represents undocumented children who were sent unaccompanied by their parents to the United States to escape violence in their homelands, mostly in Central America.

The DHS directives call for a crackdown on a parent “who directly or indirectly facilitates the illegal smuggling or trafficking of an alien child into the United States.”

Those parents are subject to expedited deportation and, “taking into account the risk of harm to the child from the specific smuggling or trafficking activity that the individual facilitated,” can be referred for criminal prosecution, the DHS memo says.

Colon is most concerned that the current process in place to review the immigration status of the thousands of unaccompanied children who arrived in the United States in 2013 and 2014 will be scrapped. About 800 of them live in Connecticut, he said.

Current immigration law provides due process for these children, Colon said, which means they are placed in custody of the federal Office of Refugee Resettlement until a relative in the United States can be found. The children’s cases are then reviewed to determine if they qualify for asylum or certain visas available to victims of crimes or violence that would allow them to remain the United States.

But the new directives say if a child is reunited with a parent, that process may no longer apply.

“What concerns me is the possibility of expedited removal,” he said.

Meanwhile many so-called sanctuary cities and jurisdictions are digging in on their resolve to avoid whenever possible to help federal immigration agents round up immigrants who are not deemed dangerous to society.

Several Connecticut cities, including Hartford and New Haven, do not always comply with a U.S. Immigration and Customs Enforcement (ICE) “detainer,” a request that a local jail or other law enforcement agency detain an individual for an additional 48 hours after his or her release date in order to provide ICE agents extra time to decide whether to take the individual into federal custody for removal.

Extending that policy to the entire state, the Connecticut legislature in 2013 approved the Trust Act, which determined that state law enforcement agencies can detain an individual beyond the time of their scheduled release only if that individual has been convicted of a felony, is subject to pending criminal charges but bond has not yet been posted, has an outstanding arrest warrant, is a known gang member, or been listed in the federal terrorist screening database.

“Law enforcement should not take action that is solely to enforce federal immigration law,” Malloy said in his memo to state agencies. “Law enforcement is not required to collect information regarding an individual’s citizenship or immigration status and there is no state or federal mandate to do so.”

One of President Donald Trump’s first acts after assuming office last month was to issue an executive order that directed the Justice Department and DHS to punish “sanctuary” cities and states by stripping them of federal policing funds. That hasn’t happened yet, but the administration indicated it is likely to begin later this year.

While the DHS directives reverse many Obama administration initiatives, they are silent on the Deferred Action for Childhood Arrivals policy that gave undocumented children brought to this country by their parents temporary legal status.

He also said, “While I am pleased that DACA is preserved, the parents of Dreamers may be deported en masse, making the relief a mirage.”

The directives also seek the hiring of thousands of additional federal immigration agents and the building of a wall between the United States and Mexico. But unlike the other policy changes, the hiring of agents and the wall will require approval and funding by Congress.