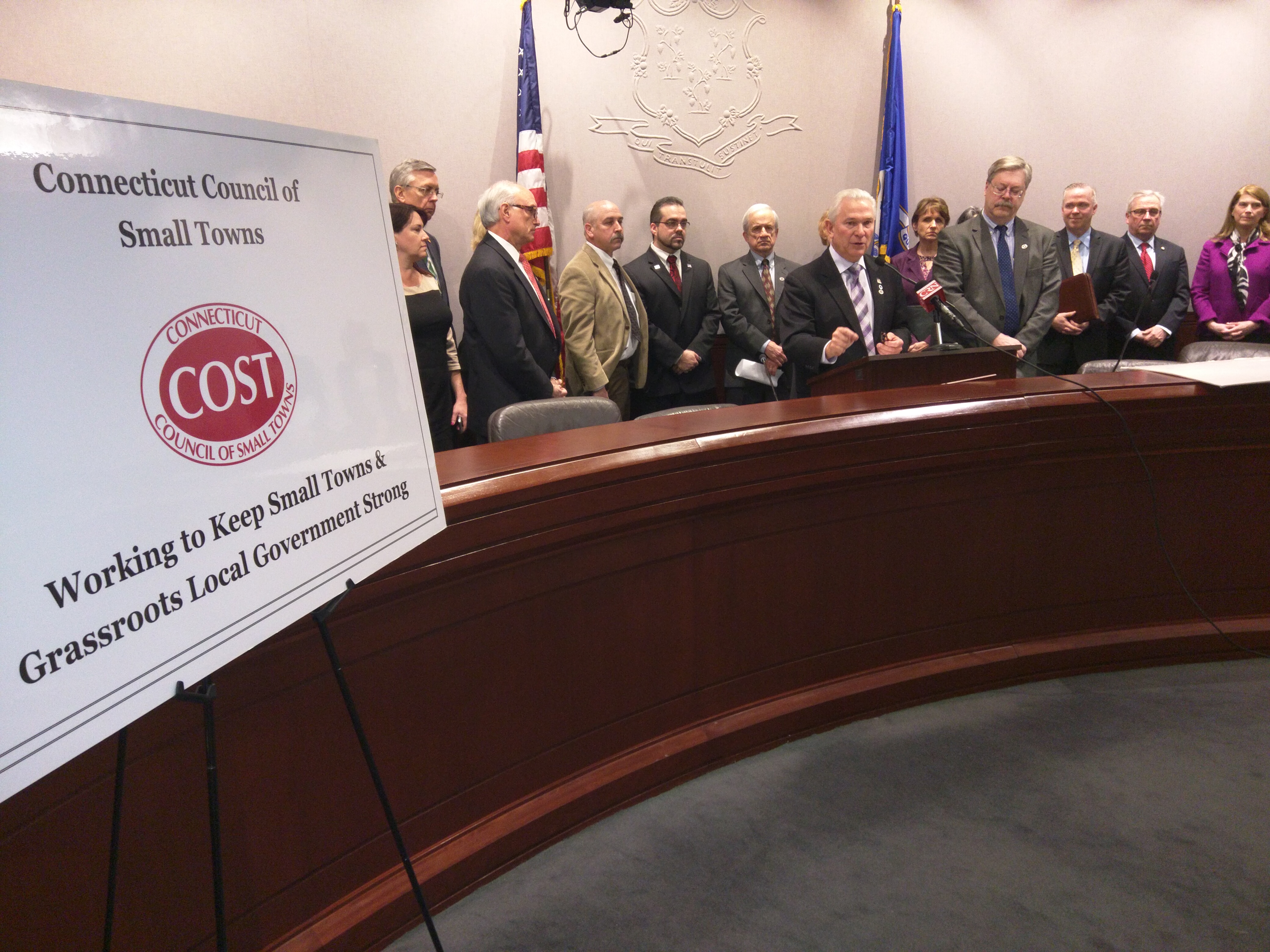 Members of the Council of Small Towns at the Legislative Office Building Thursday.

Connecticut’s small towns pressed the General Assembly on Thursday to take the governor’s proposal to shift a third of teacher pension costs onto communities “off the table” in state budget deliberations – but administration officials held firm on their plan.

And while some legislators already have said — privately or publicly — that the controversial plan effectively is dead, the Connecticut Council of Small Towns said the looming threat alone has paralyzed local budget preparations.

COST also raised a new legal argument that could force Gov. Dannel P. Malloy to choose between his public description of the pension billing plan, and his legal definition.

In other words, either stop describing it as a “spending cut” and admit it is a new $400 million annual fee imposed on cities and towns, or risk a legal battle.

“Lawmakers need to take this issue off the table and give towns some breathing room to develop local budgets that control property taxes,” said Litchfield First Selectman Leo Paul, who is president of COST.

Arguably the most problematic line item in the state budget, Connecticut’s annual contribution to the municipal teachers’ pension fund could grow sixfold between now and the early 2030s, according to a 2015 study prepared by the Center for Retirement Research at Boston College.

This and other retirement benefit programs suffer from nearly 70 years of inadequate state funding, and costs are projected to surge dramatically over the next 15 to 20 years.

Increases in these areas are some of the major reasons behind deficit projections of $1.4 billion to $1.7 billion in state finances next fiscal year.

Currently standing at $1 billion in a roughly $18 billion General Fund, the required contribution will grow by $319 million over the next two years alone — a yearly average of 16 percent.

Malloy wants to shift one-third of the teacher pension costs starting next fiscal year onto cities and towns. That would amount to $408 million in 2017-19 and $421 million the year after that.

The cost-shift would have a big impact on local budgets.

If New Haven had been required to pick up one-third of its teacher pension cost last fiscal year, it would have had to pay $11.3 million, according to data provided by the governor’s budget office. Next year, one-third of the cost rings in at $14.9 million. And the costs would continue to rise, given the state is on the hook for $381.4 million in pension costs for retired New Haven teachers. If Malloy’s plan goes forward, $127 million of that liability would be spun off to the city over the next 15 years.

“The shift is huge onto the property taxpayers of the state,” he said.

Newtown First Selectwoman Pat Llodra estimated her town’s bill next year would be equal to a 6 percent increase in local taxes.

To avoid that tax hike, “we would have to cannibalize our own programs,” she said. “This is simply a tipping point to disaster.”

The Connecticut Education Association, the state’s largest teachers’ union, calculated last month how much each town would need to increase taxes to make up for the pension cost shift and cuts to other municipal grants the governor is proposing.

Based on their analysis, Lisbon would need to raise its tax rate the most – by five mills. On average, towns that lose aid would need to increase their tax rates by nearly one mill.

Mark Waxenburg, the executive director of the teachers union, predicted many towns will resist raising revenue to compensate for the loss in state funding.

“This will have a ripple effect in the whole education system— larger class size, no more gifted and talented programs… programs would be eliminated to compensate for this charge to the teachers retirement,” he said. “The state created the problem, and now they are asking the municipalities to bail them out, and by doing so that would erode local education budgets.”

Creating a new tier of pension benefits for some teachers that would help rein in costs – as suggested during COST’s press conference – also should be rejected, said Waxenburg.

Since 2008, Connecticut has been legally obligated to make the full contribution recommended by fund analysts to its teachers’ pension program. And Malloy has been very critical of previous governors and legislatures for shirking the state’s obligations.

Malloy says the state has no option now but to face this obligation, and municipalities should play a role.

“They’ve got to have some skin in the game,” he said Wednesday while discussing his plan with state business leaders.

Ben Barnes, the governor’s budget chief, told members of the legislature’s Finance, Revenue and Bonding Committee that, “Local boards of education have benfited significantly” from the state’s picking up this “expensive cost.”

“They should be on the hook for a portion of it,” he said.

But COST officials fire back that communities have complained to state officials for decades — to no avail — that a state binding arbitration system that favors teachers drives those raises.

Some education aid increases might not be spent on schoolsMalloy would bill towns for teachers’ pensions, cut middle-class tax credithttps://ctmirror.org/2016/11/01/teacher-pension-costs-to-surge-widen-hole-in-next-state-budget/

State law also prescribes how much teachers must pay into the system, how long they must work before qualifying for a pension, and what they will receive upon retirement. Malloy has said he does not intend to change any of those requirements. State law also requires arbitration panels to take into account a town’s ability to pay when making decisions about salaries.

Elsesser and Ridgefield First Selectman Rudy Marconi also noted that the single-biggest factor behind spiking teachers’ pension costs is the state’s failure to properly save for the plan for more than 70 years.

“We didn’t create this problem,: Marconi said. “The problem is their’s today, not ours.”

Roughly 80 percent of this year’s $1 billion contribution to the teachers’ pension fund is needed to cover the fiscal sins of the past, not the benefits of present-day teachers.

Marconi also said there are some serious legal obstacles to the governor’s plan, releasing a brief prepared by Ridgefield Town Attorney David Grogins.

Grogins noted that current law does not permit municipalities to contribute to the pension fund. That restriction could easily be overcome, though, if the legislature were inclined to amend existing law. 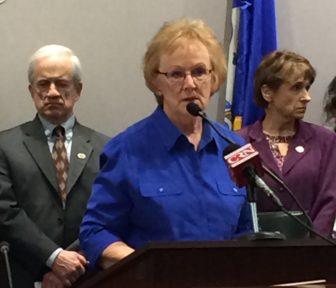 A stickier problem involves the $2 billion Connecticut borrowed in 2008 to bolster the teachers’ pension fund. In the bond covenant — the contract between the state and its bond investors — Connecticut promised the state would pay the full annual contribution recommended by fund analysts.

If towns were to pay one-third of that contribution, would it be a violation of the covenant? COST says it might be.

Why the uncertainty? Because while the Malloy administration describes the proposal as a cut to local aid, it doesn’t order $400 million-plus in reductions to existing municipal grant programs.

In actuality, it would send cities and towns bills and then transfer $400 million in receipts into the state’s coffers. From there, the state — armed with local resources — would make the full payment into the teachers’ pension fund.

Barnes told legislators Thursday that he believes “the structure that we propose does not violate those bond covenants in any regard.”

Refinancing the fund to spread out the rapidly escalating costs, however, is not an option because of the bond covenant.

“We could not undertake that kind of restructure,” Barnes said.

The governor notes that if he had simply cut existing grants to cities and towns, it would have hurt poor communities the most, since they receive the bulk of local aid.

In Bridgeport, another impoverished municipality, the state will spend $30 million this year for teachers pensions – just 20 percent more than in Greenwich although Bridgeport enrolls two and a half times as many students. 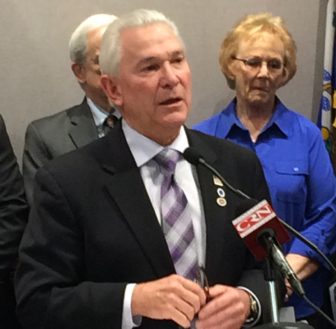 “The current system results in vast disparities in our communities,” Malloy said in February when he proposed his new state budget, pointing out that he agrees with the recent court decision that concluded the disparities in education aid being provided to impoverished school districts are unconstitutional. “This isn’t just about saving money. I believe it is almost a more reasonable policy. … We’re asking towns to help partner with the state.”

“We understand that some communities would prefer not to lose this generous hidden subsidy from the state, but it is discouraging that they would hide behind spurious legal arguments rather than directly stating their opposition to paying for their own teachers’ pensions,” Malloy spokesman Chris McClure said Thursday. “We stand by our assertion that requiring the towns to pay only one-third of the cost for the pensions of their employees is not just the right thing to do for the state, but is not violative of the bond covenant.”

By referring to the pension-billing system as a spending cut, rather than a fee on communities, Malloy — who said he wouldn’t propose any major tax hikes — also was able to keep down the total value of tax and fee hikes proposed in his new budget.

Without counting the revenue from towns, the tax and fee increases total about $192 million next fiscal year. With the pension bill receipts, though, the total hits $600 million.