The week opened with news that state income tax receipts were much lower than anticipated, potentially swelling the deficit in the next two-year budget by hundreds of millions of dollars. The skies darkened further when, on Thursday, the number grew to $450 million.

The first news prompted Gov. Dannel P. Malloy to call for a bipartisan summit of lawmakers to figure out what to do. Thursday’s bombshell caused him to impose an immediate hiring freeze and to warn of coming layoffs.

Already the state’s borrowing capacity is compromised from earlier years, a reality that on Monday caused State Treasurer Denise Nappier to propose a plan to pledge part of the income tax receipts when borrowing for future capital projects.

Lawmakers, however, mindful that whatever solution they arrive at will be an unpopular one, were unable to reach consensus – either Tuesday morning in a dry run session or later in the afternoon when the General Assembly’s Appropriations Committee could not pass a $41 billion budget proposal. Leaders from both parties blamed each other for the failure, but Malloy says he suspects the only way a budget will pass is with both sides’ participation.

And even though any major tax increases appear to be off the table this year, the Finance, Revenue and Bonding Committee spent hours Tuesday considering a variety of revenue enhancers, including an income tax increase for the wealthy and a repeal of the sales tax exemption for nonprofits. Thursday the same committee endorsed a series of tax cuts they conceded may never come to pass.

The legislature’s Republicans did finally put forward a budget proposal — one that rejected Malloy’s plan to pass some teacher pension costs on to municipalities — but it, like Malloy’s, was put badly out of balance by the massive shortfall in income tax receipts.

In what was also billed as a cost-saving move, the General Assembly began pushing for even greater attention from — and control over — the Connecticut Network or CT-N, the public affairs network it created to cover hearings, press conferences and debates.

Elsewhere in government, life bumped along:

Sen. Richard  Blumenthal was among a small group of senators who voted against confirming Rod Rosenstein as second in command at the Department of Justice, citing his failure to commit to appointing a special prosecutor to investigate the Trump administration’s possible ties to Russia.

He also went after Gen. Michael Flynn for what he called evidence of a felony regarding his Russian ties.

Blumenthal and fellow Sen. Chris Murphy visited the White House Wednesday for a classified briefing on North Korea, but afterward said they didn’t learn much new.

U.S. Rep. Joe Courtney, D-2nd District, however, learned that the Navy’s plans to increase the number of ships and submarines could challenge the building capacity of companies like Electric Boat in Groton. 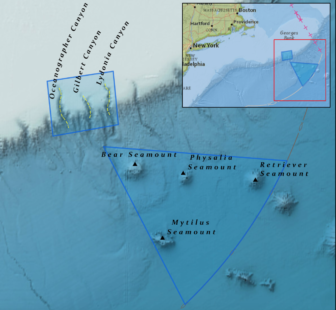 Map of the Northeast Canyons and Seamounts Marine National Monument

President Donald Trump, meanwhile, released a tax reform plan that would slash taxes for corporations, eliminate the estate tax, double the standard deduction and reduce the number of tax brackets from seven to three. It was panned by Connecticut lawmakers and other Democrats as “a tax giveaway to the very, very wealthy that will explode the deficit.”

He also signed an executive order that threatens newly won protections for, among others, an underwater national monument off the coast of Cape Cod.

So far, however, Trump has not agreed to continue making the cost reduction payments health insurance companies say they need in order to consider staying in state health insurance exchanges like Access Health. An appellate court also ruled against the proposed merger of two of the largest health insurers in the United States — Anthem and Cigna.

Friday the commander-in-chief spoke to the NRA, eliciting an opposing tweetstorm from Murphy reminding people of the victims of the massacre at Sandy Hook Elementary School.

Bridgeport Mayor Joe Ganim caused a few eyebrows to raise when he expressed an interest in being governor despite his past felony conviction for political corruption. But it was the no-surprise-of-the-week when State Comptroller Kevin Lembo opened his exploratory bid for the governor’s seat.