Insurers: Trump hasn’t committed to payments that would keep them in ACA exchanges

Washington – Despite reports to the contrary, President Donald Trump has not committed to making payments that insurers like Anthem say are needed for them to consider staying in Access Health CT and other state health insurance exchanges.

Kristine Grow, spokeswoman for America’s Health Insurance Plans, said the Trump administration has said it would make Cost-Sharing Reduction, or CSR payments for the month of May, but “is not committed to long-term payments.”

“So essentially we remain in the same place we’ve been for the last couple of months,” Grow said.

The Center for Medicare & Medicaid Services did not respond immediately to a request for comment.

Trump tweeted late Wednesday, “Democrats are trying to bail out insurance companies from disastrous #ObamaCare… with your tax dollars. Sad!,” a reference to Democratic attempts to include the cost-sharing payments in the federal budget.

The issue of cost-sharing payments, which subsidize co-payments and deductibles for low-income people who purchase coverage in state insurance exchanges under the Affordable Care Act, has become the No. 1 priority for health insurers.

Anthem CEO Joseph Swedish on Wednesday warned that his company would consider leaving some health care marketplaces or raising its rates sharply if the government does not continue the CSR payments. They would bring the industry about $7 billion this year. 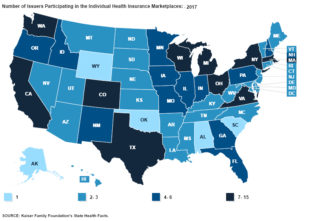 Map of the number of insurers participating in health insurance marketplaces in 2017. Click to enlarge,

Grow said the nation’s insurers, as part of a coalition that includes the American Medical Association, the American Hospital Association and the U.S. Chamber of Commerce, will soon launch an advertising campaign to press for continuation of the cost-sharing payments.

“Funding this critical financial assistance for at least two years is the only way to protect these consumers,” the coalition said in a statement. “Clarity and commitment to this funding is needed to eliminate confusion and anxiety for consumers, and to allow health plans to make timely and appropriate decisions about market participation in 2018.”

Anthem and ConnectiCare are the only two insurers left on Connecticut’s exchange, Access Health.

ConnectiCare threatened to leave the exchange last year after the Connecticut Department of Insurance rejected its request for a 27.1 percent rate hike and approved only a 17.4 percent increase.

Access Health once offered state consumers a choice of four insurers and a healthy number of plans. But UnitedHealthcare and the state’s health insurance co-op, HealthyCT, left the exchange last year.

The steady march from state exchanges by insurers has led Trump and congressional Republicans to say the Affordable Care Act is in a “death spiral,” but there are indications the market is stabilizing. In its earnings report Wednesday, Anthem, which sells plans in 14 states, said its performance has improved over the past year in the individual markets created under the Affordable Care Act, largely because of rate hikes and a suspension of an ACA tax. 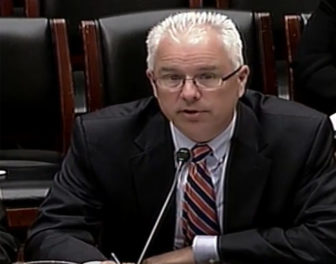 But Access Health CEO James Wadleigh last week said, “I’m worried that we could be seen as the first marketplace not to have carriers in 2018.”

Several states, including Wyoming, Oklahoma and Alabama, had only one insurer on their state exchanges this year. See detailed graphic.

Like Swedish, Wadleigh said continuation of the CSR payments will be a key factor in decisions by insurers on whether to remain on the exchange.

Those payments are bitterly opposed by congressional Republicans, who sued to have them stopped, arguing they are illegal because Congress never authorized them. The GOP won the case in a lower court and the Obama administration appealed.

On Wednesday House Speaker Paul Ryan said the subsidies will not be contained in a spending bill to keep the federal government running past Friday.

He indicated it was up to Trump to decide to continue what President Obama did —  order their payment through his executive authority out of certain unspent funds in the Department of Health and Human Services.

“That is not in an appropriation bill; that’s something separate that the administration does,” Ryan said.

Ryan also is leading an effort to repeal and replace the ACA, leading to further uncertainty in the health insurance industry.

That uncertainty is expected to impact the ability of insurers to come up with proposed rates for the ACA’s 2018 signup period. Connecticut insurers must file those rates by May 1.