A week of conflicting and colliding principles

It has been a week with many principles in play — some in opposition to others.

Gov. Dannel Malloy laid out five principles on Wednesday, all of them to do with how he will manage Connecticut’s government in the increasingly likely event that the legislature cannot pass a budget by July 1.

Even if legislators pass a temporary, short-term spending plan, it had better be balanced, Malloy warned.

He did not endorse the idea of increasing the sales tax – something health care advocates say will be necessary if Malloy is to hold to the principle of limiting harm to the state’s most vulnerable citizens.

State legislators are still considering a sales tax increase, perhaps as a form of property tax relief. That principle was behind a Connecticut Conference of Municipalities TV ad pressing legislators to adopt a budget that does not force cities and towns to increase property taxes.

There was the principle of honoring those who make the ultimate sacrifice for their country, as was the case of U.S. Navy Sonar Technician Ngoc T. Truong Huynh of Watertown, killed in a collision between the U.S.S. Fitzgerald and a container ship off the coast of Japan.

In that same vein, it is the state’s contention that U.S. veterans should not be homeless – something Connecticut has largely achieved in an overall 24 percent reduction of homelessness statewide.

Neither should whistle-blowers be punished for exposing government wrongdoing like the three Charter Oak Health Center employees who were awarded back pay by a U.S. Labor Department consent order.

Legal principles were also in the news when a federal appellate court ruled against MGM Resorts International’s attempt to block plans for a third casino built by the Mashantucket and Pequot tribal nations.

What’s fair is fair, of course, and the principle of “more work deserves more pay” seems to be the one underlying Connecticut State Colleges and Universities President Mark Ojakian’s decision to give stipends to three college presidents who are assuming more responsibility — and saving the institution a lot of money in the process.

Elsewhere on the education front, whether to act now or do more study is a big question in the debate over education funding reform. The governor says an education group’s call for a year-long analysis of Connecticut’s education inequities is “a stupid idea” and the legislature needs to act right away. 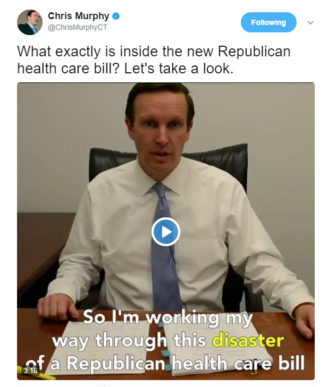 In Washington, the opposite was true. The principle of allowing time and access for public participation in the creation of legislation was a big one this week – mainly because Democrats in Washington condemed the U.S. Senate Republicans for developing in secret their bill to repeal and replace Obamacare, then rushing it to a vote.

Once unveiled Thursday, the new bill adopted many, but not all, provisions from the bill passed earlier this month by the House. Connecticut’s all-Democratic lawmakers condemned the bill as “a monstrosity,” “cruel,” and “intellectually bankrupt.” The new legislation would make deep eventual cutbacks in federal support for healthcare for the public, shift more responsibility for healthcare to the states, and collect fewer taxes from the insurance industry and the nation’s most affluent.

The fate of the Affordable Care Act hangs on the outcome of the ongoing health care reform campaign, but for the meantime President Donald Trump has continued to make the payments to insurers that keep the market more stable.

Federal funding for Planned Parenthood is also in danger of being cut under the new Republican bill, but Malloy says he is committed to having the state pick up the slack — despite Connecticut’s  fiscal woes.