Washington – Democrats, with the help of Connecticut’s senators, plan to jam up the Senate this week to bring attention to Republican attempts to repeal and replace the Affordable Care act.

Senate Minority Leader Chuck Schumer, D-N.Y., said, “Republicans are drafting this bill in secret because they’re ashamed of it, plain and simple.”

“If Republicans won’t relent and debate their health care bill in the open for the American people to see, then they shouldn’t expect business as usual in the Senate,” Schumer said.

Thirteen GOP senators are working on a plan to repeal and replace Obamacare, and Senate Majority Leader Mitch McConnell hopes to have a vote on the legislation before Congress’s July 4th recess. The senators decided to craft their own plan, instead of taking up a repeal bill called the American Health Care Act that was approved by the House last month.

That bill, which President Donald Trump told Senate Republicans is “mean,” would end health coverage for about 23 million Americans, according to the Congressional Budget Office.

Still, the Senate plan is expected to contain many of the AHCA’s features, including a reduction in federal spending on Medicaid, the joint federal-state health care plan for the poor that is known as HUSKY in Connecticut.

What’s not known is the timeline for cutbacks in Medicaid money to the states, or the amount of subsidies available to help Americans purchase health insurance.

Moderate GOP senator are looking for a longer timeline to cut Medicaid money and more generous subsidies while conservative Republican senators are seeking quicker and deeper cuts to Medicaid and smaller subsidies.

Democratic senators, including Blumenthal and Sen. Chris Murphy, plan to debate healthcare on the floor in a series of speeches that are expected to go late into the night. They also were expected to use parliamentary tactics to force the Senate to consider the AHCA in committee, which would force the GOP to work on its health bill in public.

Senate Democrats are resorting to this tactic because they don’t have the votes to block the GOP health care bill, which will need 50 votes for approval, with the vice president casting a tie-breaker. Republicans, who hold a 52-48 majority in the Senate, can’t afford to lose more than two votes. 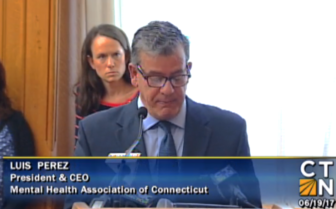 Democratic frustration over the process Republicans are using to craft their health care bill is boiling over.

Last week, in a Senate Health, Education, Labor and Pensions Committee hearing on the rising price of pharmaceuticals, Democrats on the panel repeatedly demanded the bill go through the committee process.

“I think this is a really interesting discussion, but I think it’s totally irrelevant to the most important discussion that’s happening right now, which is not in this committee,” Murphy said during that hearing. “It’s not anywhere that the American public can see. It’s behind closed doors, where there are a certain number of Republican senators that are perpetuating a fraud on the American public.”

At Blumenthal’s field hearing on the GOP’s health care bill, health care advocates and patients criticized the Republican health care bill, saying it would strip people of coverage while giving the wealthy a tax cut because it would repeal many of the taxes that fund the ACA.

“I have been doing this work since 1977… Never, in those 40 years, have I witnessed the kind of secrecy and determination to take away health coverage or any other benefit,” said Judy Stein of the Center for Medicare Advocacy.

“People will lose their health. People will die,” Perez said of an ACA repeal.

Meanwhile Sandra Carbonari, Medical director at the CT American Academy of Pediatrics, said the end of the ACA’s ban on insurer caps on coverage means “a premature baby on private insurance could exceed the lifetime limit on health care before she even leaves the hospital.”

Blumenthal’s hearing elicited a pushback from Republican officials in Connecticut, who said they were blocked from participating in the event.

“I wish Senator Blumenthal was more concerned with working on health care solutions than playing politics,” said Senate Republican President Pro Tempore Len Fasano, R-North Haven. “Senator Blumenthal has been absent while the Affordable Care Act in Connecticut has brought about increases to insurance premiums, a decrease in exchange participants, and a loss of participating insurers on the exchange.”

Fasano said, “Instead of reaching out to those on both sides of the aisle to discuss solutions, today’s event was orchestrated as a political event meant to deliver a one-sided message and wrongly promised those who came out that it would lead to change.”

Sen. Kevin Kelly, R-Stratford, co-chair of the state legislature’s Insurance and Real Estate Committee, said Obamacare was failing long before Trump was inaugurated and GOP leaders in Congress began to craft a replacement

“In the last year alone…over 15,000 people in Connecticut who previously purchased insurance through the state’s ACA health insurance exchange did not renew their coverage – with 44 percent citing the unaffordability of their plan,” Kelly said. “And Connecticut has seen a pattern over the past few years of insurance carriers leaving our exchange. This is not a new phenomenon under a new president.”

There are two health insurance carriers remaining in Connecticut’s ACA exchange, called Access Health. Anthem and ConnectiCare cover about 100,000 individuals in Connecticut though the exchange.

But both insurers have asked the Connecticut Insurance Department for sizable rate increases in 2018 and said they may leave the exchange if Trump does not continue certain payments that reduce out-of-pocket costs for low and moderate income Americans.

If the insurers quit the exchange, about 73,000 individuals in Connecticut would lose ACA subsidies to purchase insurance. Many of those people also would lose federal help to pay out-of-pocket costs like deductibles and co-payments.

Democrats blame the loss of insurers in ACA exchanges on GOP  “sabotage” of Obamacare and the uncertainty the repeal efforts have generated.