3 community college presidents get stipends to take on dual roles 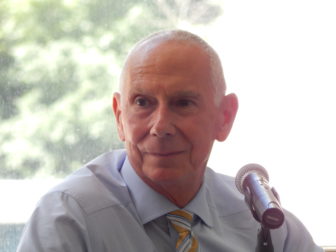 CSCU President Mark Ojakian at a Board of Regents committee meeting Tuesday.

Connecticut State Colleges and Universities President Mark Ojakian announced Tuesday the system would spend about $50,000 next year to grant stipends worth 10 percent of their salaries, but said the change would mean a dramatic savings for the system. The additional roles they are taking on – three vacant community college presidencies – would cost roughly $1.1 million in salaries and fringe benefits to fill, Ojakian said.

“We are saving about $1 million by moving in this direction,” he added.

The stipends would last as long as the presidents fill multiple positions, which is expected to continue until the system’s sweeping consolidation plan for community colleges administration is completed. Officials estimate the plan, approved in April, will save $41 million annually when fully implemented.

Ojakian said the consolidation of top administrative positions is “a conscious decision” and “an indication of where we want to go as a system.”

Steven Minkler, unlike the other two, is assuming dual roles at the same college. Minkler, who is Middlesex Community College’s dean of academic affairs, also will serve as the college’s president starting July 1 and receive an extra $13,490 next year.