Another week, another disaster, another controversy, no budget

Another week, another disaster – this time in California where wildfires have killed scores of people, injured many others and destroyed or damaged thousands of homes. The fires were proving almost impossible to contain, challenging the best efforts of exhausted firefighters.

In Connecticut, life’s challenges are more subtle, but equally real: Legislators from opposing parties buckled down on compromising in an effort – so far, fruitless – to adopt a budget needed to restore something resembling normalcy to municipal governments and agencies statewide. 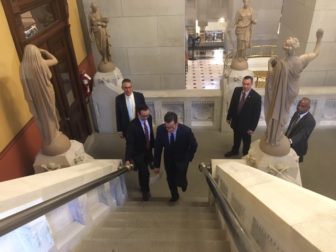 Can lawmakers get it done by this week? Both Republican and Democratic leaders said they are more optimistic than ever that they could reach bipartisan agreement, perhaps calling into question just how optimistic they were in the first place. Gov. Dannel Malloy, meanwhile, says he is likely to veto anything that includes reducing payments into the state employees’ pension fund. (And just for icing on the financial cake, the state closed the 2016-2017 fiscal year $22.7 million in the red.)

Meanwhile, the state’s teachers have filed a lawsuit seeking to block Malloy from making $140 million in cuts to education funding under the executive order he is using to run the state until a budget is passed. The state’s unions also issued a warning to legislators that not to make any changes in their pension payment plans.

Malloy, who so far has not been included in the negotiations, has been doing his talking in the press.

All of this, of course, creates a political climate ripe for new challengers, among them a Greenwich hedge-fund manager willing to ante up $1.8 million for a shot at the Republican nomination for governor. He has the most money of a field of 16 gubernatorial hopefuls.

In Washington, D.C., there has been plenty of contentious politicking for months, but last week began to focus more sharply on tax reform. President Donald Trump wants to cut the corporate tax rate from the current 35 percent; though many of Connecticut’s largest companies, like many elsewhere, are already paying substantially less than that. 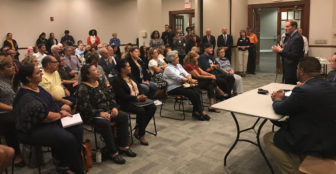 Connecticut’s all-Democrat congressional delegation has its own thoughts on tax reform, but what really ignited their ire last week was President Trump’s response to the humanitarian crisis in Puerto Rico. U.S. Sen. Richard Blumenthal returned from the island territory to report that the government is in danger of “failing” its citizens there. Trump’s comments that the FEMA and other response teams sent there might pull out is a “double standard” and a “betrayal” of fellow Americans, he tweeted.

He is appealing to his fellow lawmakers for appointment of a special administrator to oversee recovery of the island.

Blumenthal’s colleague and fellow Sen. Chris Murphy was angered by Trump’s executive order undermining the Affordable Care Act. It is “a cruel backdoor way to strip health benefits from Connecticut families,” he tweeted.

U.S. Rep. Elizabeth Esty is the latest Connecticut lawmaker to propose some form of gun control legislation — this time regarding ammo. The idea is not likely to get very far with a GOP-dominated House of Representatives.