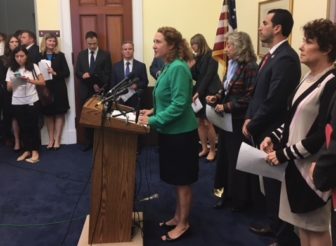 Rep. Elizabeth Esty, at podium, joined by Democratic colleagues from Nevada and representatives of gun control groups, including the Brady Campaign to End Gun Violence.

Washington – Rep. Elizabeth Esty, who represents Newtown in Congress, on Thursday was the latest lawmaker to introduce a bill aimed at curbing gun deaths.

Esty’s legislation would prohibit the transfer, import or possession of magazines that can hold more than 10 rounds of ammunition.

She said evidence lives are saved when a mass shooter has to reload a gun was seen in 2011 in Tucson, Ariz., when a gunman who severely injured former Rep. Gabrielle Giffords and killed six others dropped his magazine while reloading and was apprehended.

“The bill is just common sense,” Esty said. “Every bullet…that escapes from the barrel of a gun has the potential to end human life.”

Esty is among a growing group of lawmakers, mostly Democrats, who are frustrated that Congress has failed to act on any meaningful gun control legislation since 20 first graders and six educators were massacred at Sandy Hook elementary school in December of 2012, an event that so shocked the nation that it sparked a gun control debate in Congress for the first time in many years.

But since then, the number of lawmakers backed by the National Rifle Association in Congress has grown, making the effort to pass a gun control measure more difficult, even as the number of Americans who are victims of gun violence climbs.

Esty’s bill, which has no GOP support, is the latest in an avalanche of legislation that has been introduced in Congress by those who want to tighten federal regulations on firearms. Most have been sponsored, or co-sponsored, by Connecticut lawmakers.

The bill that has the best prospect in the GOP-controlled House and Senate is one that would ban “bump stock” devices that make semi-automatic weapons fire like outlawed automatic weapons.

Stephen Paddock, the Las Vegas shooter, had adapted some of his semi-automatic rifles with the device and a number of Republicans said they were willing to consider a ban on “bump stocks.”

Sen. Diane Feinstein, D-Calif., and Rep. Carlos Curbelo, R-Fla., are the main sponsors of the bump-stock ban. But the odds their legislation would pass Congress dimmed this week when House Speaker Paul Ryan backed away from congressional action on bump stocks and said instead that he and many of his fellow House Republicans hope the Bureau of Alcohol, Tobacco, Firearms and Explosives will act administratively to outlaw the devices, which the agency ruled legal in 2010.

“We think the regulatory fix is the smartest, quickest fix, and then, frankly, we’d like to know how it happened in the first place,” Ryan said on Wednesday.

Sens. Richard Blumenthal, D-Conn., and Chris Murphy, D-Conn., also reintroduced their bill that would repeal a 2005 law promoted by the National Rifle Association, called the Protection of Lawful Commerce in Arms Act, that makes it difficult to sue gun makers.  PLCAA does not prevent gun makers from being held liable for defects in their design, but it shields them from lawsuits stemming from the criminal use of their product.

“Making the gun industry immune from lawsuits effectively handed them a license to kill,” Muphy said.

Blumenthal said the law was used “as a complete barrier to the pursuit of justice” when 10 Sandy Hook families sued the maker of the AR-15 used in the Newtown massacre.

“Our simple measure will give victims of gun violence their day in court and unlock the doors to justice — repealing the sweetheart deal that Congress granted to the gun lobby,” Blumenthal said.

Blumenthal is also the co-sponsor, with Sen. Bob Menendez, D-N.J., of the Senate version of Esty’s high-capacity magazine ban.

Murphy is working on winning GOP support for a bill he hopes to introduce soon that would expand FBI background checks of gun purchasers. A similar bill, introduced in response to the mass shooting at Sandy Hook, has failed in the Senate several times.

Other legislation that was revived after the massacre in Las Vegas on Oct. 1 includes:

Meanwhile, the NRA hopes to revive legislation that was put on ice after the Las Vegas shooting.

One NRA-backed bill, called the Share Act, would loosen restrictions on the purchase of gun silencers. By law, people who want a silencer must pay a $200 tax and go through a registration process that includes a criminal background check.

The NRA calls those restrictions “expensive and excessive” and says loosening them would help protect the hearing of hunters.

Another NRA priority in this Congress is the “Concealed Carry Reciprocity Act,” which would nationalize concealed carry laws to allow those with a permit in one state to carry their firearms into another state.