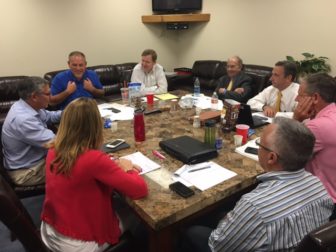 Though state government has gone 102 days into the new fiscal year without a budget, the outgoing year’s finances weren’t trouble-free.

Comptroller Kevin P. Lembo confirmed recently that Connecticut closed the 2016-17 fiscal year with a $22.7 million deficit, its third consecutive year in the red.

And while this was a relatively tiny deficit — equal to 1/8th of 1 percent of the General Fund — it further reduces the state’s already modest emergency reserves.

Though the fiscal year ends on June 30, the comptroller’s office doesn’t issue year-end statements until Sept. 30. Certain tax receipts received over the summer still accrue to the prior fiscal year.

The deficit was “largely driven by underperforming revenue collections” and particularly income and other tax receipts that plunged after the mid-April filing deadline, Lembo wrote in a letter to Gov. Dannel P. Malloy.

The sales tax, the second-largest revenue source for the state, finished $136.5 million below budgeted levels.

These two reductions were offset partially by corporation tax receipts that finished $198 million higher than anticipated. The state also spent $407 million less than the appropriated level in 2016-17.

The Malloy administration had estimated as late as July that Connecticut still might close the books on 2016-17 with a modest, $35.7 million surplus.

The ability of Malloy and the General Assembly to reduce spending further was hindered by surging retirement benefit and other debt costs, which largely are fixed by contract.

Payments into the state employee and teacher pension programs rose by $65 million or 3.1 percent last fiscal year. But they are projected to climb another $356 million or almost 17 percent, this fiscal year.

These retirement benefit costs are expected to continue growing faster than most other segments of the state budget for the next decade-and-a-half, while revenue growth is projected to remain sluggish in the near future.

“FY 2017 was a very tight year,” Chris McClure, spokesman for the governor’s budget office, said. “A final tally of only about one-tenth of 1 percent of the total state budget is a tolerable amount — even if not our goal —  given the scale of the problem we faced in the spring when income tax revenue fell short of expectations. The legislature stepped up then to take necessary actions last fiscal year to address a large potential deficit, and we are optimistic we can reach an agreement with them on a responsible and balanced budget for the current biennium.”