A taxing week in Washington delivers a Christmas gift to business

It has been a taxing week in Washington – literally and, for some, figuratively – and not without its headaches in Connecticut, too.

The big development, of course, was the Republican Party’s passage of a huge tax reform bill that will bring big benefits to business, some temporary relief to the middle class, and a projected $1.5 trillion in additional debt for a future Congress to worry about.

Connecticut’s congressional delegation – all of which voted against the measure – say its provisions will hurt the state’s working families, students and sick people in a myriad of ways.

For starters, the new law could mask a dangerous downturn in state tax receipts as taxpayers pay some of next year’s taxes this year while the payments are still completely deductible, state officials say.

A more significant change is the elimination of the federal mandate that Americans have health insurance or pay a penalty. Analysts say this is likely to drive up premiums for people enrolled through the Affordable Care Act, causing state officials to consider adopting a mandate of their own, a la Massachusetts.

(Friday, by the way, was the last day Connecticut residents could buy insurance through the state health insurance exchange, Access Health CT.)

There are also questions about the impact of the tax reform on the state’s ability to adjust its taxes as it addresses the financial difficulties looming in upcoming years. There is debate as to whether the federal reform will help Connecticut’s economy, which, by the way, lost 3,500 jobs in November. Will Gov. Dannel P. Malloy  recommend highway tolls as one revenue generator? He won’t say.

Something the tax bill didn’t do is also causing concern. It didn’t include relief for the Westport-based Newman’s Own Foundation, which gives 100 percent of its profits to charity but will now face an unusual 200 percent tax hike.

In another bill, Congress declined to do anything permanent to fund community health centers or the Children’s Health Insurance Program – both of which are in danger of running out of money. Connecticut’s Sens. Richard Blumenthal and Chris Murphy voted against the stop-gap measure Thursday. Murphy’s office had been the site of a sit-in by undocumented activist youth who were brought to the U.S. as children and are seeking protection from deportation for themselves and other so-called “Dreamers.”

Connecticut officials are still trying to assess what the impact of the temporary funding bill — or Continuing Resolution — will be on the state’s child health program. 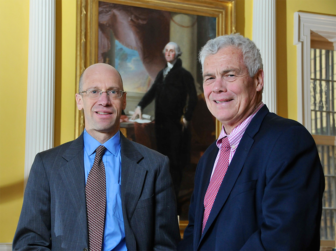 The state’s more immediate budget troubles aren’t over, either, and won’t be addressed until next year when the General Assembly convenes to fix the Medicare Savings Program  and perhaps the projected $208 million budget deficit.

Hope springs eternal in politics, of course, and there is no shortage of people vying to be Malloy’s successor. The newest is Oz Griebel, who opened an independent campaign for governor Wednesday with his running mate, Monte Frank, a Sandy Hook gun-control activist.