Friday is deadline to buy health insurance through Access Health 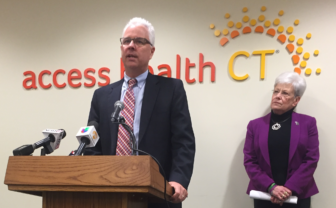 With one day left of open enrollment, 106,000 Connecticut residents were enrolled in health insurance through Access Health CT, the state’s exchange, and officials reminded residents that they still will face a federal tax penalty if they don’t have insurance in 2018.

Access Health CEO Jim Wadleigh and Lt. Gov Nancy Wyman hoped to clear up any confusion caused by Congress’s approval of the GOP tax bill, which included a repeal of the individual mandate tax penalty that takes effect in 2019.

“It’s important that residents understand that the elimination of the health care mandate in the tax bill doesn’t have any any bearing on next year,” said Wyman, who chairs Access Health’s board, at a press conference Thursday. “Residents still need to be covered or face federal tax liability.”

Wyman and Wadleigh also stressed that the shorter open enrollment period — seven weeks compared to three months — ends on Friday and urged consumers to sign up for insurance.

“We are starting to see that end-of-open-enrollment push,” Wadleigh said. “We’re excited that it looks like we’re on track to potentially hit the same enrollment that we had last year.”

About 110,000 people were enrolled in insurance through the exchange at the end of open enrollment last year. The two insurers that participate on the exchange this year are Anthem and ConnectiCare.

“This has probably been the most challenging open enrollment that our organization has had to endure since year one,” Wadleigh said. He attributed some of the challenges to the confusion caused by the multiple attempts by Republicans to repeal the Affordable Care Act.