Gun violence and financial distress…What to do?

What to do, what to do… in Connecticut, about the state budget; and in Washington, about guns.

Thursday, after months of anticipation, the state panel charged with recommending a way out of Connecticut’s financial crisis released a comprehensive plan to shift the tax burden from wealthy income-taxpayers onto businesses and consumers.

Among a detailed list of actions, the Commission on Fiscal Sustainability and Economic Growth proposed raising the minimum wage, and reducing all income tax rates while raising sales taxes and corporation levies. 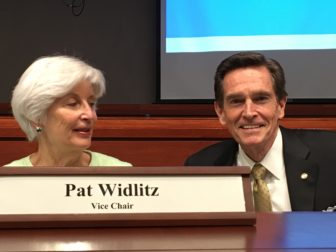 Co-Chair Jim Smith and Vice Chair Patricia Widlitz at the presentation of a report by the Commission on Fiscal Sustainability and Economic Growth recommending sweeping tax changes.

Reaction to the plan, initially, was muted, gracious and polite, but any proposal this broad and far-reaching is likely to meet resistance.

But speaking of ways to increase revenue, House Democrats are preparing legislation that would allow the state to permit, regulate and profit from sports betting. The plan is conditional upon an upcoming U.S. Supreme Court decision. The state is not the only entity that expects to profit, of course, as NBA and Major League Baseball officials were happy to tell the legislature.

The state does not have to be the only key player in rebuilding Connecticut’s tepid economy, though. Forming some sort of regional organization or collaboration could bring big economic benefits, officials here and in other parts of the country have learned.  The fiscal sustainability commission has proposed giving such entities taxing power to help things along.

On the gun violence issue in Washington, Connecticut continued to play a prominent role, as President Donald Trump asked senators, including Democrat Sen. Chris Murphy, to propose “comprehensive” gun safety legislation. Murphy and U.S. Rep. Elizabeth Esty, D-5th District, are proponents of a “red flag” bill like Connecticut’s that would enable law enforcement authorities to remove firearms, at least temporarily, from those deemed a danger to themselves or others. 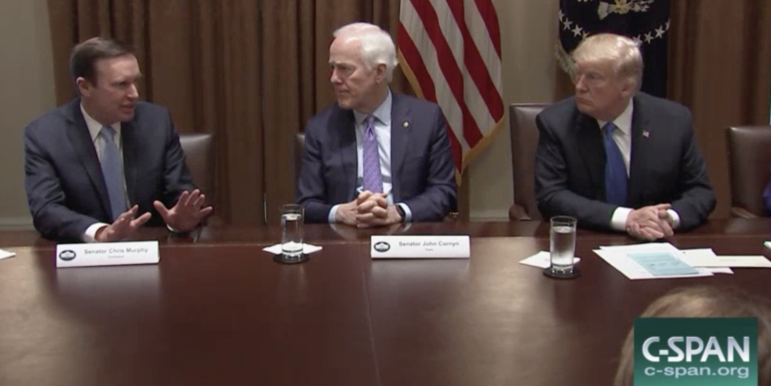 Sen. Chris Murphy warns President Trump about the clout of the NRA in Congress.

Two more states and Puerto Rico have joined the multi-state coalition Connecticut helped to launch last week to strengthen gun regulation efforts, Gov. Dannel P. Malloy announced Monday. It is one of several initiatives he and other Democratic governors are undertaking to defy a number of Trump’s policies they oppose.

It’s been rough sailing for Malloy recently and for his nominee to be the next State Supreme Court chief justice. Justice Andrew McDonald underwent a 13-hour grilling before the legislature’s Judiciary Committee which, on a tie vote, sent his bid forward to the full legislature with an unfavorable recommendation. His chances of appointment got a little more murky when Democratic state senator Gail Schlossberg recused herself from the vote.

Chances of there being a new state senator in Connecticut’s 12th District went to 100 percent when state Sen. Ted Kennedy Jr. announced he would not seek reelection in order to focus on his position at the American Association of People with Disabilities.

On the other hand, parents trying to enroll their children in a number of magnet schools in the region have little idea of what their chances are of success — and the uncertainty is becoming a point of contention.

Able-bodied adults without dependents who receive food stamps are also an issue for the Trump administration, which wants to impose a work requirement as a condition of providing help.

In Bridgeport, the brother of the man repeatedly abused at the Whiting Forensic Division has filed two lawsuits on his behalf — one against the state and the other against 12 of the forensic nurses and treatment specialists who the suit charges carried out the abuse or failed to report it.