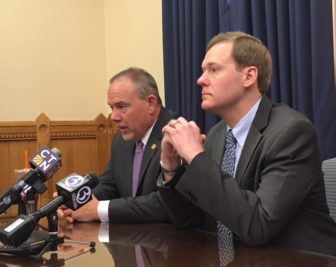 House Speaker Joe Aresimowicz, D-Berlin, said Tuesday he intends to call a vote next week on legislation making an initial commitment to implementing electronic highway tolls, despite Republican opposition that could brand Democrats as the party of tolls.

Many Democrats are nervous at the prospect of an election-year vote on a still-developing bill that would provide no immediate financial relief to the depleted Special Transportation Fund, instead authorizing the Department of Transportation to begin what is expected to be a multi-year process.

“I’m not willing to walk away from this session with doing nothing to solve this problem,” Aresimowicz told Capitol reporters. “Our job is to rep the citizens of the state and make very difficult decisions for the betterment of this state. This falls into that category for me.”

The Democratic majority in the House has fallen from 114-37 after the 2008 election to 79-71, saddling Aresimowicz with the smallest working majority in decades. Opposition by just five House Democrats to tolls would scuttle the effort.

Aresimowicz said he did not fear Republican campaign mailers accusing Democrats of opening Connecticut motorists to tolls on every major highway, saying the counter message would be to label Republicans as choosing higher commuter bus and train fares and a freeze on transportation repairs as preferable to tolls.

“Are they prepared for the mailers of they’re the party of no tolls and crumbling infrastructure that makes us not competitive with neighboring states?” he asked.

The legislature’s constitutional adjournment deadline is midnight May 9. One of the challenges facing Aresimowicz is drawing a bill with sufficient detail to convince Democrats to risk an election-year vote.

Aresimowicz said he wants to see legislation that provides a significant discount — as high as 50 percent — to in-state drivers. This could be provided in several ways, including through an income-tax credit, or a reduced price for commuter highway passes.

Aresimowicz said he believes that even with in-state discounts, tolls could raise up to $1 billion per year once fully implemented, with close to half of the revenue coming from out-of-state motorists.

“Those are the discussions that we need to have,” he said, adding that the alternative is to accept a series of wide-ranging cutbacks in Connecticut’s transportation program.

Gov. Dannel P. Malloy has been warning since November that the Special Transportation Fund, which uses fuel taxes and transit revenue to pay debt service on borrowing for transportation projects, is headed for insolvency.

Absent more funding, the state is facing scrapping some rail services, raising fares, and suspending 40 percent of planned capital projects worth about $4.3 billion in construction activity — including major highway projects such as rebuilding the Hartford viaduct, the Malloy administration says.

Republican legislators have countered that Connecticut must better prioritize its transportation program and borrowing in general.

“It’s clear the majority of Republicans have staked out a position” on tolls, Aresimowicz said, charging the GOP is motivated by election-year politics. “It’s clear we’re going to have to do it on our own.”

That measure would direct the Department of Transportation to develop a plan to establish tolling on Interstates 84, 91 and 95, and on the Merritt and Wilbur Cross parkways. The department also would assess where toll gantries should be located, how much revenue would be raised from the system, and what types of discounts might be offered to Connecticut residents.

The bill also would allow the legislature 30 days to act upon the report after receiving it during the 2019 General Assembly session. But if the House and Senate did not reject the DOT’s plan, the restoration of tolling would be deemed approved.

But even with that option, House Republicans remain wary of the bill.

House Minority Leader Themis Klarides, R-Derby, said this should come as no surprise to Aresimowicz or to anyone else.

“We have the third smallest state in the country and every toll proposal has given us options of everywhere from 50 to 80 some-odd tolls,” she said. “That is a non-starter for us.”

“We are open to conversations about tolls, but they must be something reasonable,” Klarides added.

But Aresimowicz said the GOP and other toll opponents have distorted the potential impact, adding this has been facilitated — at least in part — by the bill that has cleared two legislative committees.

“There’s so much gray area,” he said. “It allows individuals that are hellbent on stopping tolls to define it any way they want. I’ve heard every ludicrous argument.”

Rep. Tony Guerrera, D-Rocky Hill, co-chair of the Transportation Committee and an ardent supporter of electronic tolling, said legislators who allow the transportation program to languish should not assume that makes them safe on Election Day.

“There’s always a price to pay no matter what you do,” he said. “You have to argue your point and show where you stand.”