Tolls clear one legislative committee, but fate remains in doubt 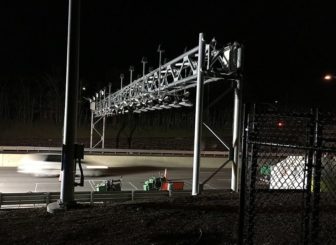 The legislature’s Transportation Committee narrowly passed a bill Thursday that could establish tolls on Connecticut highways — but the measure’s ultimate fate remained uncertain.

Advocates of the bill conceded opposition to tolls remains strong in the full House and Senate and that some legislators on the fence could be reluctant to back tolls in a state election year.

House Speaker Joe Aresimowicz, D-Berlin, has said the chamber will vote this year on a measure to establish tolls.

“We’ll have a (House) vote on it, and we’ll have to see,” Rep. Tony Guerrera, D-Rocky Hill, the House chair of the Transportation Committee said, declining to predict whether it would pass there, or in the Senate.

The legislature is narrowly divided in both chambers. Democrats hold an 80-71 edge in House while the Senate is split 18-18.

The Democrat-controlled Transportation Committee passed the bill in a 19-16 vote along party lines.

The bill would require the Department of Transportation to study how to establish tolling on Interstates 84, 91 and 95, and on the Merritt and Wilbur Cross parkways. The department also would assess where toll gantries should be located, how much revenue would be raised from the system, and what types of discounts might be offered to Connecticut residents.

Guerrera, one of the legislature’s most ardent supporters of tolls to finance a major rebuilding of the transportation infrastructure, said the measure could end a lot of confusion.

“This will start the process,” Guerrera said. “This will answer a lot of questions.”

The bill also would allow the legislature 30 days to act upon the report after receiving it during the 2019 General Assembly session. But if the House and Senate did not reject the DOT’s plan, the restoration of tolling would be deemed approved.

“I find that very objectionable,” said Sen. Len Suzio, R-Meriden, who opposed the bill. “We’re leaving open the possibility this could happen by default? … This involves one of the biggest expenditures in state history.”

Rep. Gail Lavielle, R-Wilton, another opponent of tolls, called the measure unnecessary, adding that the DOT could study tolls without a legislative mandate.

Lavielle said the public would immediately assume adoption of this bill would ensure the establishment of tolls — even with the 30-day window for lawmakers to reject any DOT plan. “I do not want to mislead people,” she said. 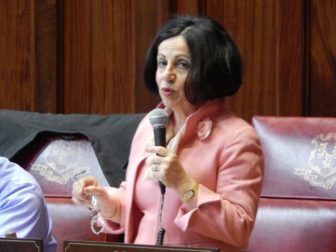 “Connecticut is in a very different financial position than other states,” she said. “We haven’t recovered from the last recession.”

“I submit we have our heads in the sand,” he said.

Osten also noted the retail gasoline tax has been set at 25 cents per gallon since 1997.

“If people think a quarter today is the same thing it was in 1997, they ought to look in their pocket,” she said.

“We need to do something here,” Guerrera added. “… That’s what this is all about, making the quality of life for the people in this state better.” 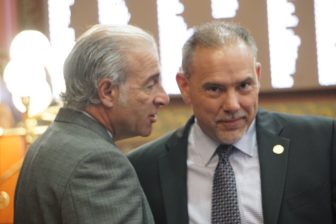 Rep. Tony Guerrera, left, talking to House Speaker Joe Aresimowicz about his tolls bill, which never came to a vote.

Absent more funding, the state would need to scrap some rail services, drive up fares, suspend 40 percent of planned capital projects, including major highway projects such as rebuilding the Hartford viaduct, to remain solvent over the next five years, the administration says.

The governor asked legislators in February to add seven cents to Connecticut’s 25-cents-per-gallon retail gasoline tax, and to order electronic tolling on highways. The latter, if approved, probably would not yield major revenue until the 2021-22 fiscal year, the administration says.

“This is a positive step forward as we work to ensure the long-term stability of the Special Transportation Fund,” Malloy said after Thursday’s meeting. “Let’s be clear: Without new revenue, we will be forced to delay or cancel billions of dollars of projects in every town in Connecticut. These projects aren’t optional, they are critical to ensuring our roads, bridges, tunnels, and rails remain in a state of good repair. In addition, we will be forced to once again increase fares and reduce services on MetroNorth, Shore Line East, and CT transit.”

The bill approved in committee Thursday also includes a provision to bolster the Special Transportation Fund in the short-term.

The legislature already has approved a plan to gradually transfer sales tax receipts from new car purchases from the budget’s general fund and into the transportation fund between now and 2021.

This would accelerate that plan, adding an extra $9 million to transportation this fiscal year and an extra $67 million in 2018-19.