A time for remembering — and politicking

It’s Memorial Day weekend, when parades and solemn ceremonies mark the many and extreme sacrifices made by members of the American military so that the rest of us can carry on as we do.

It is certainly a time for politicking, and there is no shortage of parades and picnics where candidates for elective office can raise their public profiles. Elected officials did some of that last week as well both here and in Washington, D.C.

President Donald Trump, whose profile could be no higher, continued to make headlines through his on-again, off-again, on-again approach to a summit with North Korea.  The president’s cancellation of the talks on Thursday drew comment from Connecticut Sen. Chris Murphy (among those facing election this November) who said he was not surprised because “the lead up to the meeting has been as discombobulated as everything else in this White House’s foreign policy.” 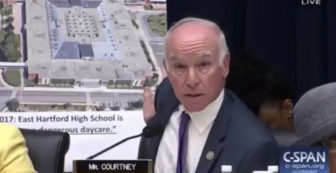 Likewise, U.S. Rep. Joe Courtney, D-2nd District, took U.S. Education Secretary Betsy DeVos to task for her repeated use of an inaccurate and 17-year-old anecdote unfairly besmirching the reputation of East Hartford High School – and for her failure to respond to their letters to her about her remarks.

(Courtney wasn’t the only one on DeVos’s case, by the way. Immigration advocates and the Connecticut ACLU condemned her assertion that referring undocumented students to immigration authorities is “a school decision, it’s a local decision.” )

U.S. Rep. Jim Himes, D-4th District, might have had his Fairfield County constituency in mind when he split from the rest of Connecticut’s delegation and voted for scaling back provisions of the 2010 Dodd-Frank bill.

It is unlikely there are any state politicians who would openly oppose a state bill designed to work around the federal government’s tax reform act that limits the deductibility of state and local taxes, but it is equally unlikely the IRS will let Connecticut – or any other “blue” state whose residents will pay more under the law – get away with it.

In Connecticut, no one has been more determined to stay in the public’s good graces than Bridgeport Mayor and convicted felon Joe Ganim, a man of the people who spent some time on Park Street in Hartford this week personally soliciting signatures for his petition to be on the gubernatorial ballot.

Gov. Dannel Malloy, though not a candidate himself, probably had November’s elections in mind when Tuesday he signed into law a bipartisan pay-equity bill  — the only one Democrats were able to pass of several bills aimed at benefitting working women. The governor also said he is ready to open talks with Connecticut’s native American tribes over who has rights to sports gambling now that the U.S. Supreme Court is allowing it in any state that wants it.

Public life is hard, as many know, and sometimes folks have had enough. University of Connecticut President Susan Herbst, for instance, announced she would be stepping down next summer; and Manny Sanchez, third-place finisher in the recent Democratic convention in the 5th Congressional District, announced he would not pursue the nomination in a primary.

The primary races for lieutenant governor, on the other hand, are crystallizing both state parties’ many   issues of gender, ethnicity, and generational change.