Susan Herbst to step down as UConn president in 2019 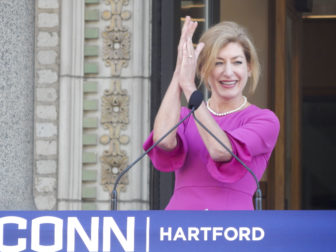 Susan Herbst told the University of Connecticut community in an email Monday she will step down next summer after eight years as the 15th president of the state’s flagship university, a tumultuous time of dealing with budget constraints.

“Stepping down was not an easy decision by any means,” Herbst wrote. “But a university is forever and each of us knows that we are only its temporary caretakers and champions. None of us are indispensable and the right time for a change always arrives eventually. With my employment agreement concluding on July 1 of next year, I felt that would be the right time for me.”

After she steps down, she will resume teaching. She will stay on the UConn faculty, teaching at a Stamford campus that grew during her tenure, adding student housing.

Herbst, who is the first woman to lead the university since its founding in 1881, was selected in December 2010 — potentially an awkward time, just a month of the election of Gov. Dannel P. Malloy. But the administration of his predecessor, Gov. M. Jodi Rell, had kept Malloy informed of the selection.

The president is appointed by the Board of Trustees, not the governor, but no president of a state university wants to take office at odds with a new governor, who serves as ex officio head of the board. Both Rell and Malloy met with Herbst and  endorsed her selection.

Similarly, the search for a new president will begin in the final months of another governor’s term, with applicants uncertain who will be the next governor or what the be the new administration’s attitude towards financial support of UConn. Malloy had tried to shield from UConn from deep cuts, vetoing one Republican-crafted budget that he deemed disastrous to public higher education.

Tim Herbst, one of the three candidates for governor guaranteed a place on the August primary ballot, made Susan Herbst’s resistance to budget cuts a campaign issue in January, saying he would seek her dismissal and the appointment of a new board.

“If I’m elected governor, I’m going to appoint a new Board of Trustees, and the Board of Trustees is going to make the decision as to whether she gets appointed or reappointed,” he told the Journal Inquirer. “But the Board of Trustees that I appoint are going to very clearly know where I stand with respect to the mission of UConn, the purpose for its existence, what it’s there to do, and quite frankly that it’s not going to be a bottomless pit of state taxpayer dollars.”

Those are comments that applicants are likely to note.

UConn made a major commitment to bioscience under Herbst, continued the modernization of the Storrs campus and  opened a new campus in downtown Hartford in 2017, closing an aging satellite facility in West Hartford. Malloy said she will leave an “indelible mark” on UConn.

The school’s ranking among public research universities in the U.S. News survey has risen from 26 to 18. Its endowment grew from $272.3 million to $421.8 million, with a goal of $1 billion set by Herbst.

Lawrence D. McHugh, who was the board chairman when Herbst was selected in 2010 and through much of her tenure, was lavish in his praise.

“Susan has been one of the best presidents in the university’s history and hiring her is one of the most important and far-reaching decisions we made as a board,” McHugh said. “Her contributions have been powerful and lasting. She led the place with a fierce determination to drive UConn higher and higher academically, to expand the faculty, focus on student success, build outstanding facilities, and to do all she could to ensure UConn grew and thrived.

“Susan Herbst has been a tremendously effective leader for this university,” UConn Board Chairman Thomas Kruger said. “Her relentless pursuit of academic excellence and institutional quality has made an extraordinary difference at UConn, and she will leave an incredibly positive legacy.”

She had her difficulties with the legislature over a variety of issues, ranging from generous pay increase granted to her by the trustees in 2014, a controversy over the school’s handling of sexual assaults at the main campus in Storrs, and the closure of a satellite in Torrington.

In 2014, the university’s governing board voted to increase  Herbst’s annual compensation to $831,070 by 2019 — a 60 percent boost in the eight years she has run the school. Her contract was also extended by three years to 2019.

The same year, the school agreed to pay nearly $1.3 million to settle a lawsuit filed by five current and former students over the university’s handling of sexual assault allegations. The agreement, released through a joint statement by UConn and the plaintiffs, also stipulates that UConn admits no wrongdoing and denies the allegations against it.

Herbst’s original response to the allegations struck some as tone-deaf — focused on protecting the university’s reputation, not reassuring parents and students.

“It was very difficult this week to hear our UConn police officers painted as uncaring, insensitive and rude. They will continue to [do their jobs] with a high level of professionalism, no matter the name-calling,” she said. “I cannot speak to the motivations of people who have suggested this.”

The search process will be mindful of the political calendar.

Kruger said he would appoint a committee of faculty, staff, students, alumni, and trustees this summer to begin a national search. It will be managed by Rachel Rubin, the university’s chief of staff and executive secretary to the board, and Michael Kirk, the deputy chief of staff.

The committee’s goal will be to select finalists in the fall. As was the case in 2010, the board would seek the involvement of the outgoing and incoming governor.

Malloy, whose administration lured Jackson Labs, a leader in genomic research, to a Connecticut near the UConn Health campus in Farmington, viewed Herbst as a partner.

“UConn is making its mark as a top-flight center for research thanks to forward-thinking, new partnerships with the state, including Next Generation Connecticut and Bioscience Connecticut – historic investments that have attracted companies like Jackson Labs, grown good-paying jobs for our residents, and turned our state into a bioscience hub,” Malloy said.