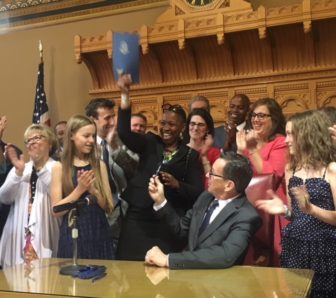 Gov. Dannel P. Malloy signed a bipartisan pay-equity bill Tuesday at a celebration skipped by Republicans and colored by the legislature’s failure to deliver other items on an election-year agenda at least partly geared to working women: A $15 minimum wage, paid family medical leave, and an overhaul of sexual harassment laws.

“I hope lots of candidates running for office will talk about those failures in the coming election,” Malloy said, prompting appreciative laughter from the politicians and activists witnessing the bill signing. Then he grinned, glanced to his left and said, “Particularly in the Danbury area.”

Malloy was looking at Julie Kushner of Danbury, a Democrat who is retiring as a regional director of the UAW to challenge Sen. Michael McLachlan, R-Danbury. Kushner smiled and nodded as the women around her applauded.

After previously opposing it, McLachlan voted for the pay-equity bill this year. But Kushner, like other Democrats, is campaigning on a need for a paid family and medical leave law and a higher minimum, two issues that generally have been opposed by Republicans.

The pay-equity bill, however, had strong bipartisan support, passing 35-1 in the Senate and 142-4 in the House. All five no votes were cast by Republicans, including Sen. Joe Markley, who is the GOP’s convention-endorsed candidate for lieutenant governor.

House Minority Leader Themis Klarides, R-Derby, who testified in favor of the bill at a public hearing, was among those invited to the bill signing, but her staff said she was traveling out of state Tuesday.

The bill makes Connecticut the fifth state to bar employers from asking applicants about their pay history. The theory behind the pay equity law is simple: Women historically earn less than men, even for similar jobs, so relying on pay history only will continue inequities. The new law does not bar an applicant from using pay history to negotiate for higher pay.

“This is about leveling a playing field that has been uneven for far too long,” said Rep. Robyn Porter, D-New Haven, whom Malloy called the leading champion of the bill. “I appreciate being introduced as a champion, but no champion stands alone.”

Another co-sponsor, Rep. Derek Slap, D-West Hartford, brought his wife and two daughters to the bill signing. Sen. Mae Flexer, D-Killingly, talked about the changing political environment, saying, “This is a really exciting moment, and it is a moment that a year ago we weren’t able to make happen.”

None of the other pay-equity laws have been in effect long enough for researchers to determine if they are working. A Massachusetts pay-equity law that passed with the support of the Boston Chamber of Commerce in 2016 doesn’t take effect until July 1.

Nora Duncan of the AARP said the new Connecticut law will benefit workers at the beginning and ends of their careers.

Older workers seeking new employment after being downsized, often from high-paying managerial jobs, complain employers won’t consider them for lower-paying, non-managerial jobs once they know their pay history, she said. It was a common lament at jobs fairs.

“I was hearing it every single time,” Duncan said.

The sexual harassment bill passed the Senate, but died on the House calendar when the session ended earlier this month. The minimum-wage increase and paid family and medical leave legislation didn’t get a vote in either chamber.

Advocates offered two compromises: first extending the timetable for getting to $15 by two years, from 2021 to 2023; and a more modest version, which would have raised the minimum by one dollar in each of the next two years.